Yucatán then and now: Yaxcabá

Some time ago we looked at images of the restored altarpieces at Yaxcabá.  Recently we reviewed some of our much earlier pictures, taken in the 1980s before conservation work started, and show here some of our favorite shots from that time and place: 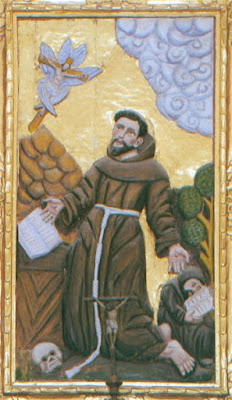 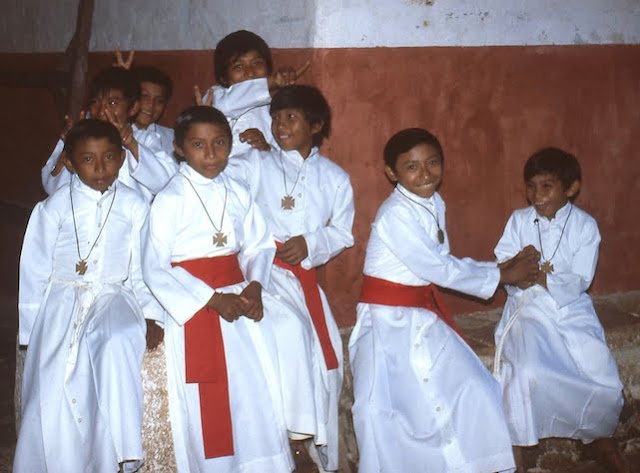 One of more distinctive colonial churches in Yucatan is the fortress church of Santa Elena Nohcacab, an imposing regional landmark located in the Puuc hills between Uxmal and the bustling city of Ticul. 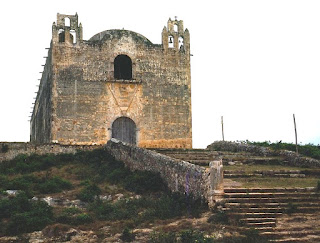 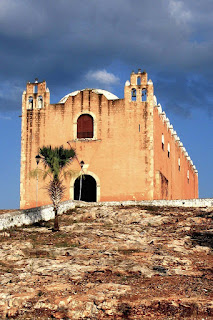 Santa Elena in 1984 (l)  and in 2008 (r)
Once dubbed the "Montecassino of Yucatan", the church and its precincts occupy a commanding site atop an imposing outcropping in the center of the village. To approach the church one must climb a long flight of steps—a pathway used since ancient times for religious processions ­as witnessed by John Lloyd Stephens during his famous visit in 1843, and still followed today.
Although the sanctuary, with its high stone archway, formerly served as the primitive Indian chapel erected here in the 16th century as a visita of Ticul, the rest of the church dates from the 1700s. 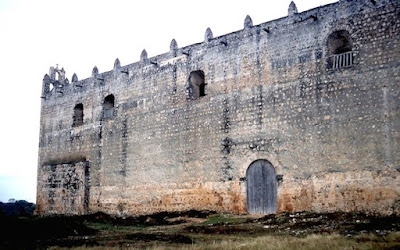 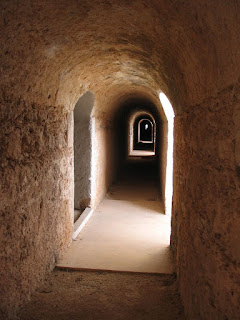 The massive nave walls accomodate several deep niches and enclose a narrow passageway, or camino de rondo, that runs  inside the upper walls on both sides. 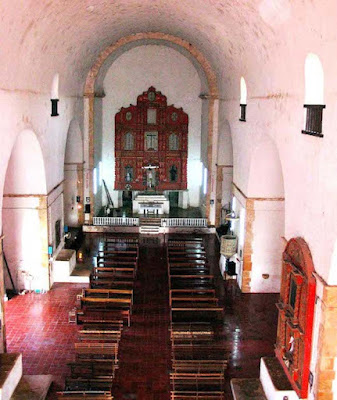 After long years of neglect, the church has undergone much needed conservation: the roof repaired, the walls stabilized and selectively strengthened, and the retablos cleaned and restored. The mummified remains of several children found beneath the nave floor during the repairs are now on display inside the church, a morbid tourist attraction.

Santa Elena is a gallery of late colonial Yucatecan altarpieces, most of which have been restored in recent years. 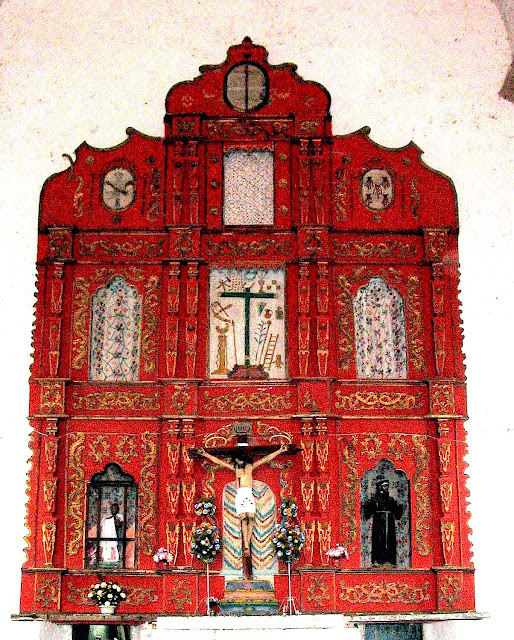 The main altarpiece is in provincial late baroque style, painted bright red with its narrow estípite pilasters edged in gold.
A painted, folkloric Calvary cross with the Instruments of Christ’s Passion occupies the center niche, above a scarred crucifix. 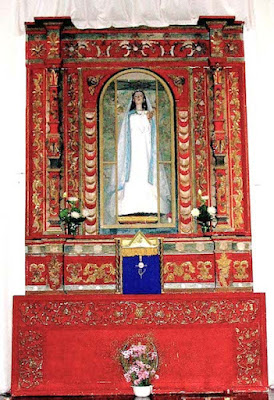 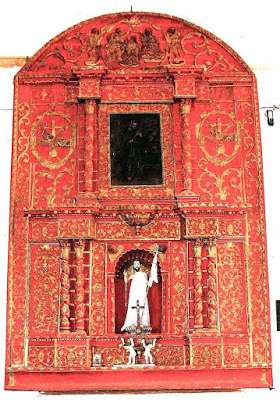 Several smaller side retablos also painted red and gold with spiral columns and estípite pilasters, occupy the lateral niches along the nave. 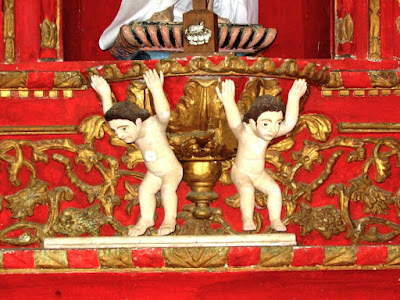 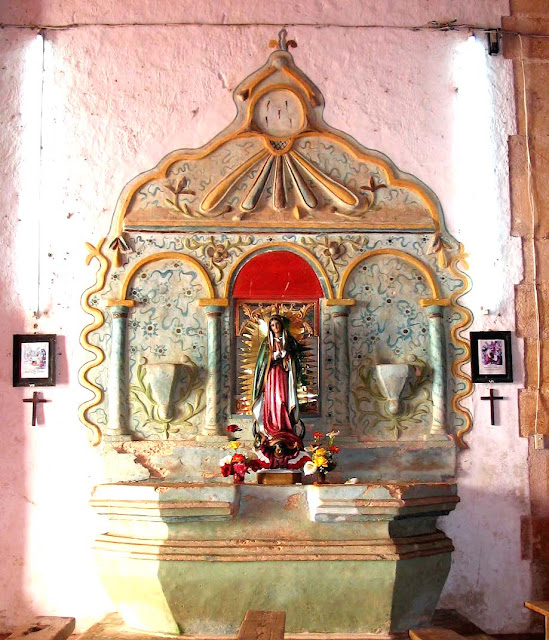 Another curiosity is the arcaded stucco wall retablo of the Five Wounds, framed by undulating relief vines.

The Box Retablos
Santa Elena is also home to an unusual collection of wooden diptychs or processional "box" retablos. These cupboard-like portable altars, some with doors, housing crucifixes and local santos, are decorated in colorful folkloric style and most likely fabricated in the late colonial times. 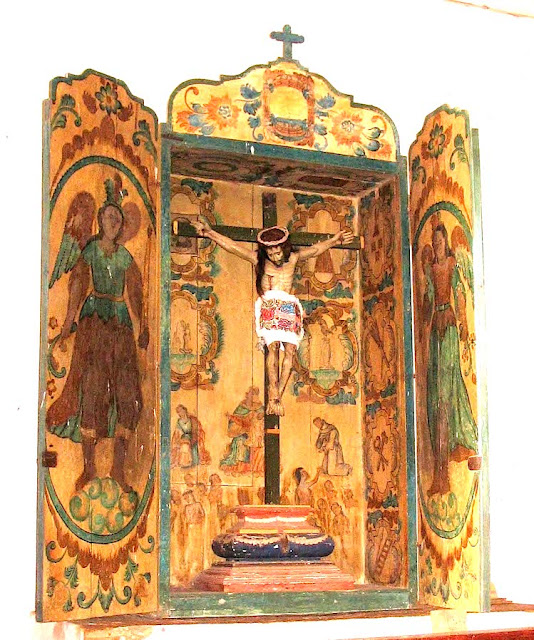 This vibrant box retablo, the most elaborate of the group, retains both its doors and is surmounted by a curving pediment. The rather squat statue of Christ inside is realistically carved with bloody wounds and scarred legs, and wears an embroidered skirt in rustic Yucatecan style.
The retablo is vividly painted in a simple palette of blue, green and earth colors, applied in broad strokes. Angels with feathered head dresses appear sentinel-like on the doors, holding candles, while Instruments of the Passion adorn the interior. 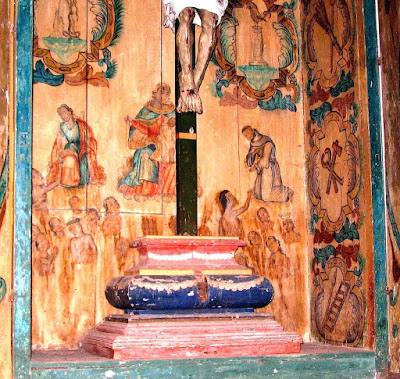 A depiction of Souls in Purgatory (Las Animas) on the lower part of the back panel is clearly painted by a skilled hand, with finely drawn figures of The Virgin and a Franciscan friar reaching out to those in torment below. 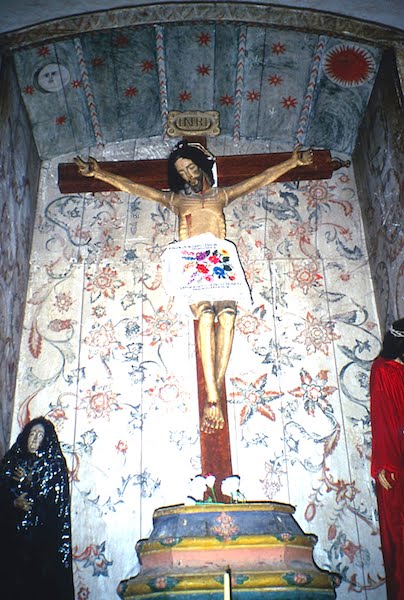 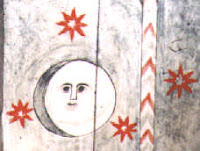 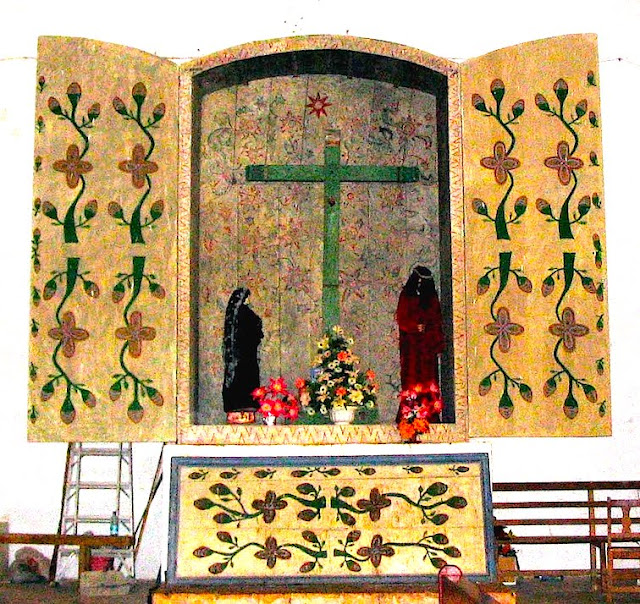 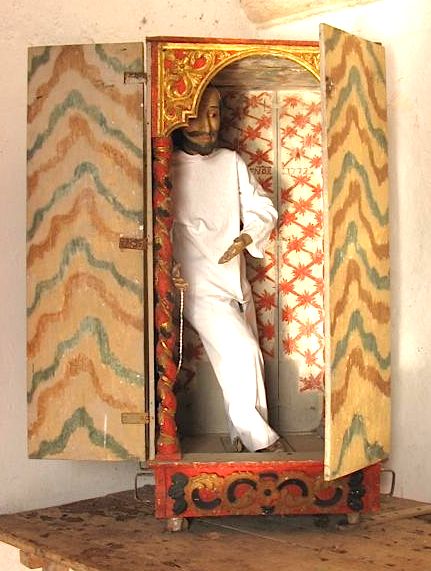 The tiny processional retablo of San Pascualito—the only one dated (1772)—is the smallest of the group, barely containing the figure of the saint, a local favorite who is dressed in Yucatecan "campesino" style.

Posted by Richard Perry at 12:38 PM No comments: 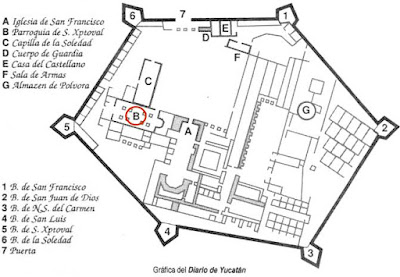 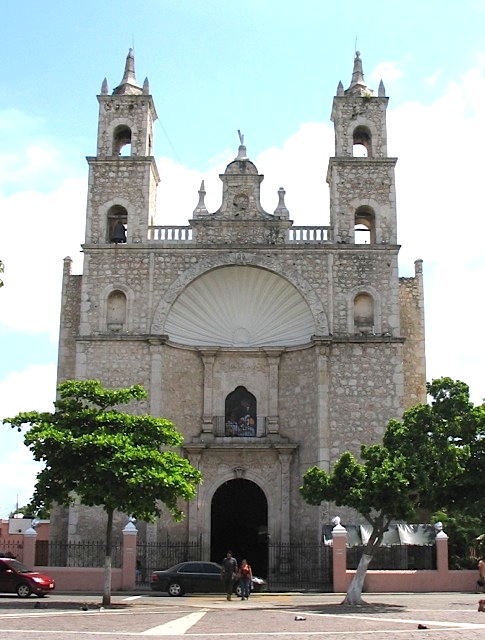 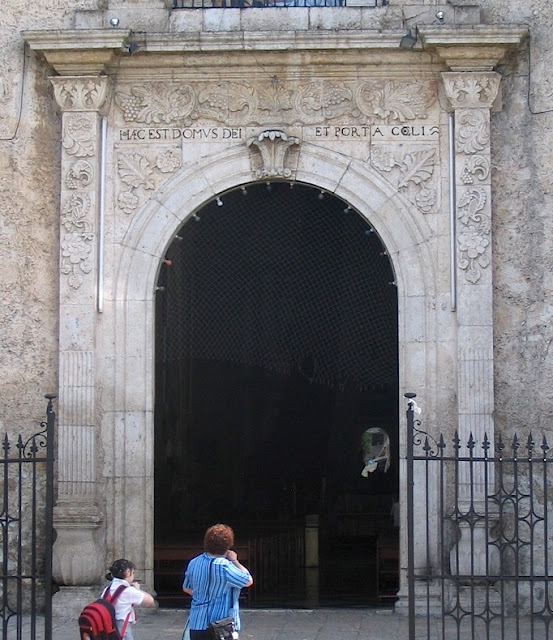 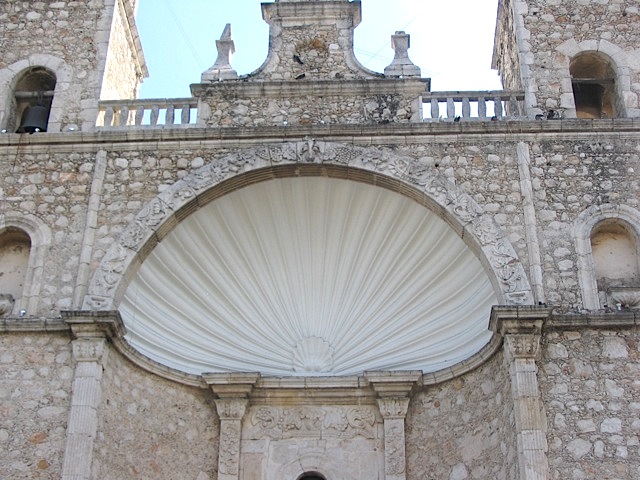 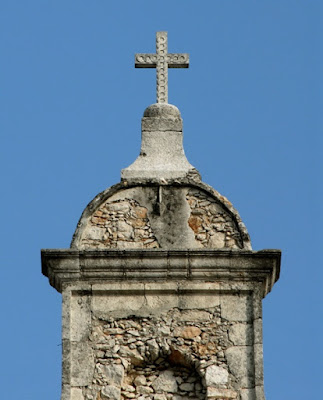 Posted by Richard Perry at 10:51 PM No comments:

Yucatán, then and now: Umán

Now almost a suburb of Mérida, in ancient times Umán was known as Dzibikal, “Painted Building,” an important Maya town and ceremonial center.
San Francisco Umán was one of the later Franciscan foundations, established in 1576 and only becoming a residential mission in 1583. The appearance of the church and mission at Umán has changed little since the 1980s when these photographs were taken. 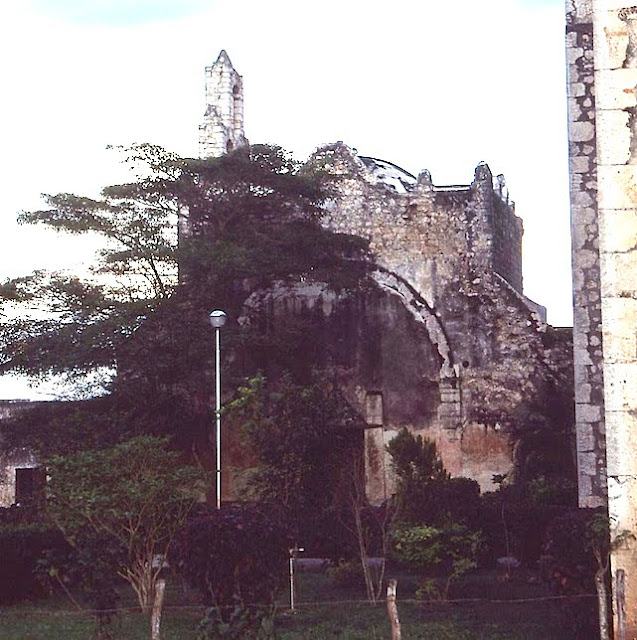 The early 16th century mission was distinguished by its imposing open chapel which still stands, on an elevated platform beside the church to the north east—probably the site of a former Maya temple.
Although stripped of its once vast pole-and-thatch ramada out front, the now blocked archway of the original chapel remains visible, its founding date of 1576 inscribed above the entrance and its high dome and tall belfry still pointing skywards. 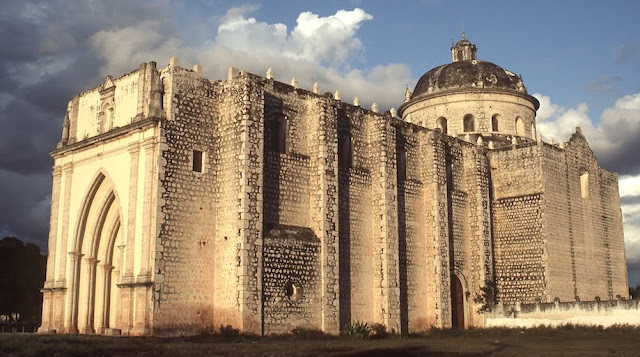 The church, by contrast, is much later, designed in the 1790s and probably completed in the early 1800s by Juan de Torres, the urbane architect of San Cristóbal in Mérida. The broad nave, wide transepts and prominent dome above the crossing are typical of late colonial church design throughout Mexico. 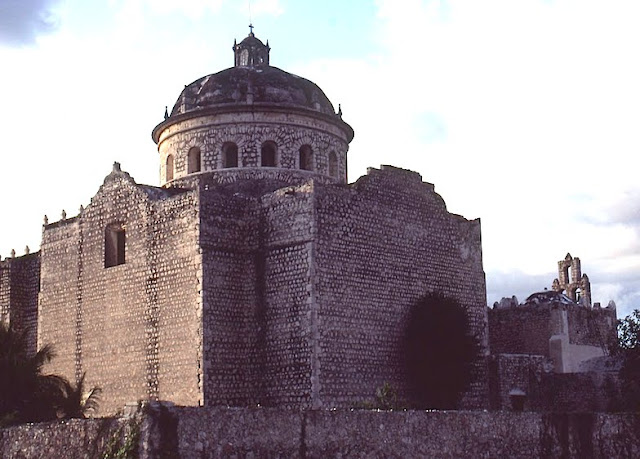 Dwarfing the adjacent open chapel, the impressive dome of the church rests on a high drum ringed by 16 stained glass windows and surmounted by a cupola bristling with pinnacles,
The fortress-like exterior, with its sheer walls and narrow buttresses, has been repointed in typically Yucatecan style with white limestone cobbles glistening like gems in a dark matrix. 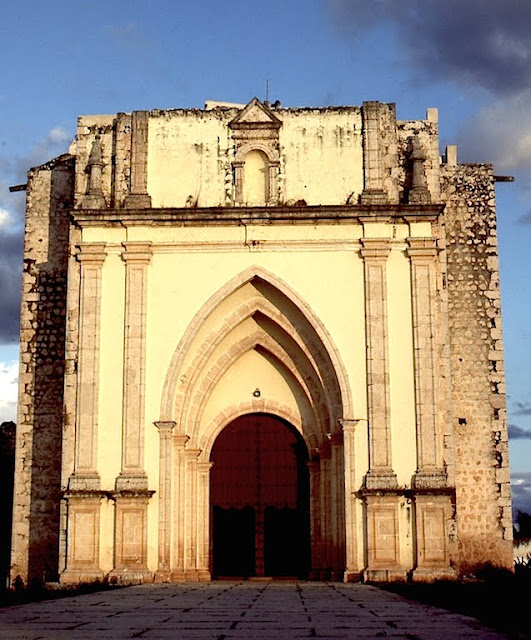 The facade however, is atypical. Although incomplete, lacking towers or even a belfry, it is dominated by an eclectic porch. A simple, rounded doorway is enclosed by a cluster of receding, pointed arches of Gothic inspiration framed in turn by classical Doric pilasters.
The lofty interior is clean and uncluttered, focusing attention on the giant modern crucifix raised above the main altar. Except for the crossing, the church is rib-vaulted throughout—another neo-Gothic element. 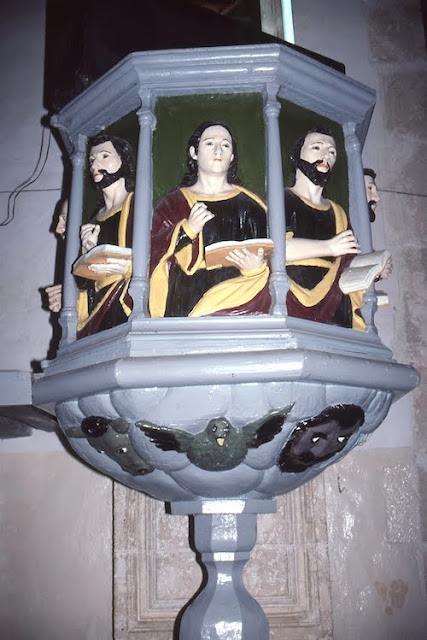 Nothing now remains, however, of the reputedly magnificent baroque altarpieces that once graced Umán, although a colorful colonial era pulpit stands out with its bold reliefs of the Four Evangelists and the Tetramorph.

Posted by Richard Perry at 11:32 AM No comments: