In this series we look at several magnificent Jaliscan altarpieces, related not only by their distinctive late baroque style but also by their links to 18th century designers and artisans in Guadalajara.

In our first post we described the main retablo at the ex-hacienda chapel of El Cabezón.  We follow this up with reviews of the retablos of the Aranzazú chapel, in Guadalajara, and the church of Amacueca to the south.

Formerly part of the vast Franciscan monastic complex in Guadalajara, the 17th century Aranzazú chapel honored Our Lady of Aranzazú, the patron saint of the Basque nation and the Oñate family, founders of the city.

Three sumptuous altarpieces crowd this narrow chapel and present a study in contrasts.

The main retablo at the east end is a supreme example of the late baroque style generally known as anástilo—in which the sculpted estípite columns dividing the frame lose their former emphasis melting into an ornamental, filigree like background.

The side altarpiece of The Passion of Christ, composed in a more prismatic estípite style, is relatively sober, certainly in comparison with the in-your-face sumptuousness of the retablo of San José opposite.

We start with the retablo mayor, the main altarpiece dedicated to the eponymous Virgin. 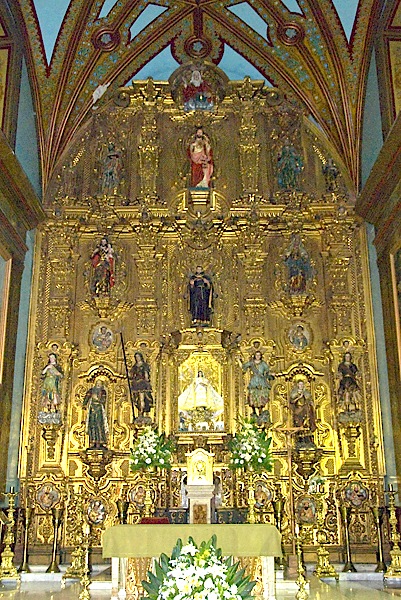 Main retablo of the Virgin of Aranzazú

A more restrained but no less sophisticated version of the El Cabezón retablo,

Pairs of giant estípite pilasters extend from the predella (base) to the curved gable, although in a more flattened style than the exuberant, projecting pilasters at El Cabezón.

The enclosed center section too, although possibly altered in the mid 1800s, is surprisingly modest both in scale and ornament compared to the extravagantly bescrolled calle at El Cabezon—features that approximate the Queretaran retablo style of the later 1700s. 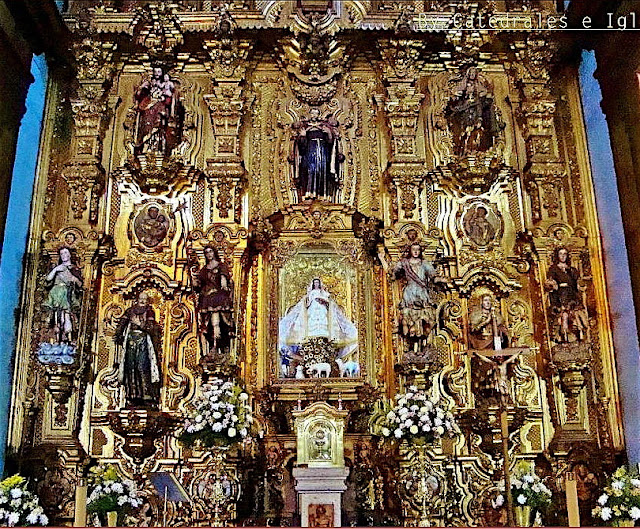 The iconography is especially complex, especially since the statues have been often moved.

The titular Virgin occupies the illuminated center niche with St Francis in the niche above her. She is flanked by her parents Sts Joachim and Anne. St Joseph and St Isabel, the mother of John the Baptist, stand on either side of Francis. 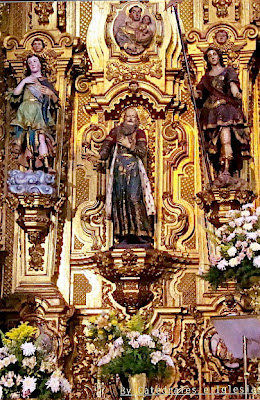 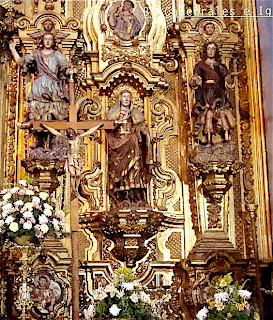 The oval medallions above the statues portray the Franciscan saints Anthony of Padua and Bernardino of Siena.  Four full size figures of archangels are mounted on the estipites of the lower tier. 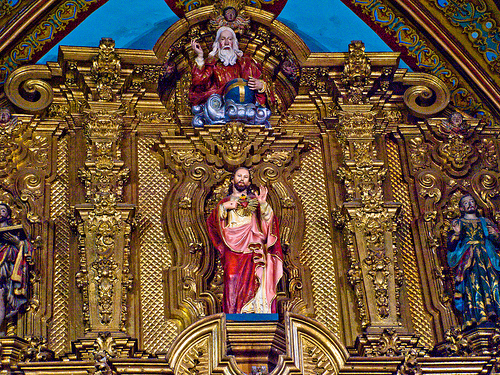 In the gable, below El Padre Eterno, stands Jesus of the Sacred Heart—a recent addition—flanked by two other bearded saints clad in rich estofado robes..

Although many of these statues may date from the 19th century, the smaller, oval reliefs along the base of the altarpiece depicting other saints and church notables may be original, contemporary with its fabrication.   These include portraits of the Fathers of the Latin Church—Augustine, Gregory, Ambrose and Jerome— with scholars Thomas Aquinas and St Bonaventure added for good measure.

The smaller figures at the side of the upper gable may represent Duns Scotus and Maria de Agreda, noted supporters of the Doctrine of the Immaculate Conception—a dogma much favored by the Franciscans in the 18th century. (more details by Paco Juarez)

background detail from the Amacueca retablo

Posted by Richard Perry at 3:29 PM