For our first post on Yecapixtla, its arts and architecture, we take an overall view of the priory, its history and environs. 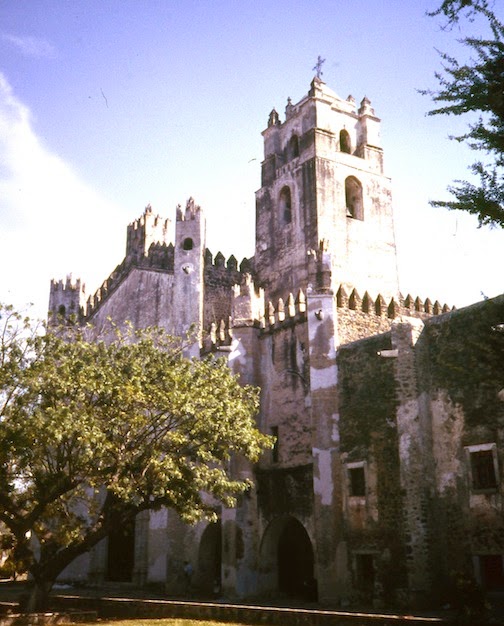 YECAPIXTLA
Shining Nose
Strategically placed on a fortified bluff between two deep gorges, this proud city doggedly resisted assimilation by the powerful Aztec empire. The aristocratic lords of Yecapixtla wore the jade noseplugs traditionally reserved for kings—a privilege proudly commemorated in the town's place name.
So when the Spaniards arrived in the spring of 1521, the independent townspeople put up a fierce struggle before finally succumbing to the superior numbers and weaponry of the invaders and their Tlaxcalan allies. The river reportedly ran red with blood.
Despite this fearful encounter, Yecapixtla retained its preeminence into colonial times and was chosen by the conquistador Cortés as one of the four regional villas of the Marquesado, his far flung estates.

Although Franciscans from Cuernavaca first evangelized Yecapixtla and erected a primitive adobe-and-thatch mission here, it was the Augustinians who took over and built the magnificent stone fortress priory of San Juan Bautista that stands here today—the flagship of their chain of monasteries in the region.
From the church roof, ringed by battlements, a vast golden plain patched with green stretches away to the southwest, fading into an ash blue haze of smoking corn and sugar-cane fields. The purple wall of the Tepozteco range rises to the north, and to the east looms the snow-capped cone of the volcano Popocatépetl. 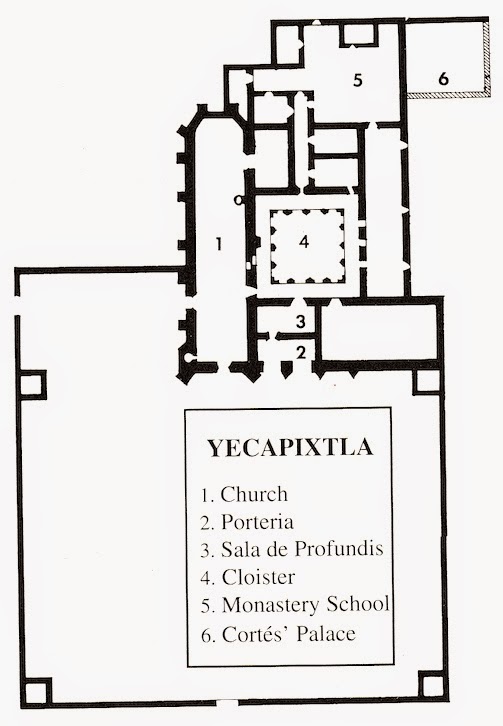 The Atrium
The priory is fronted by a large, L-shaped atrium enclosed by formidable stone walls bristling with spiky merlons. Battlemented posa chapels anchor each corner.
The Atrium Cross
Yecapixtla also boasts a conspicuous carved stone cross. Like those at nearby Cuernavaca and Temimilcingo, it stands conspicuously atop a high stone base with corner merlons, set directly in the path to the church door.
Although considerably eroded, the front of the cross is delicately carved with Passion symbols, notably angled spikes on the arms and shaft—a regional pattern.
A Chalice appears at the top of the shaft from where an emerging Host occupies the axis of the cross, in the form of a flower or sunburst. A thin band extends up from the chalice through the center of the Host, terminating in a tiny cross, above which floats an oval, cordlike Crown of Thorns motif.
Another Chalice and Host appear on the base of the cross.
The back of cross is plain, although there is an unusually realistic Augustinian heart with a protruding aorta carved on the pedestal (see reverse image above). 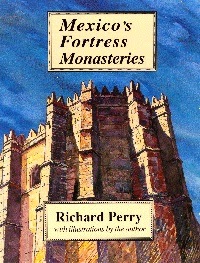 for details on other 16th century Mexican monasteries, consult our classic guide book
Posted by Richard Perry at 10:02 PM