Epazoyucan. Part Two: the Convento and its Murals

In contrast to Zempoala, all the Epazoyucan murals are contained in the adjacent convento. 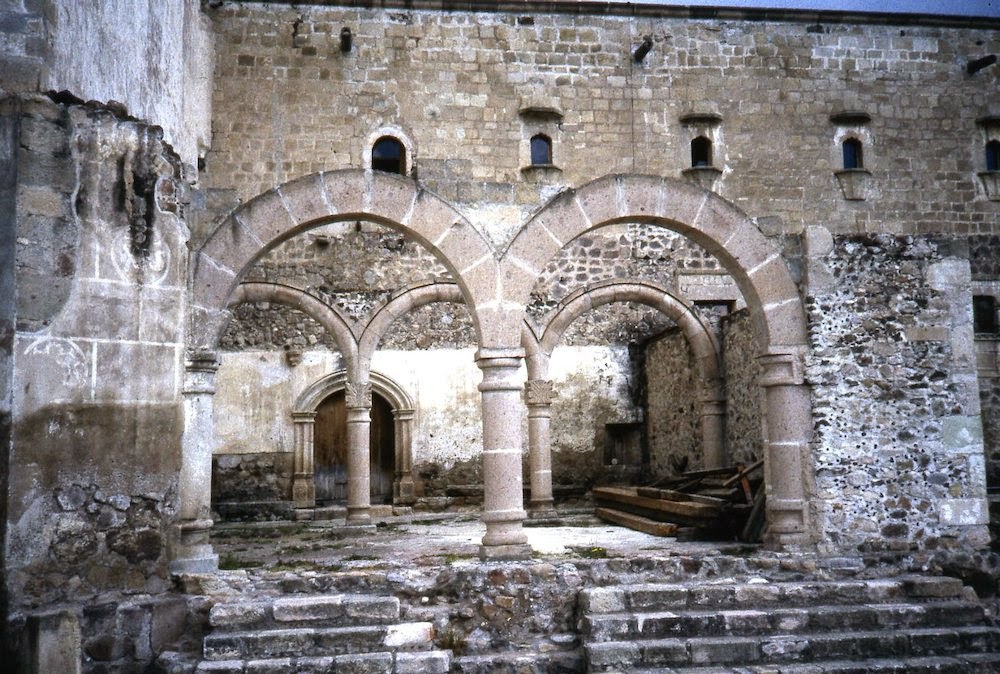 The Convento
Part of the ancient temple stairway now leads up to the entrance (portería) of the convento attached to the south side of the church.
Although partly restored, it remains open to the sky. Two plain arcades bridge the deep entry, some of whose columns are headed with unusual foliated capitals—models for the cloister arcades, whose plain molded arches and and simple banded columns are transformed by the capitals. 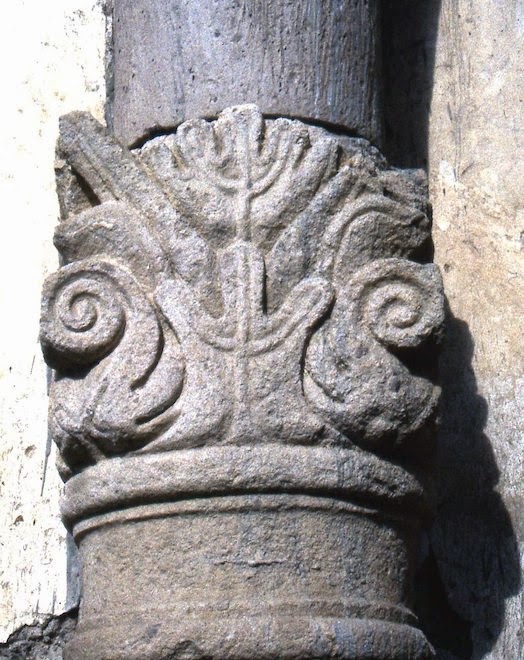 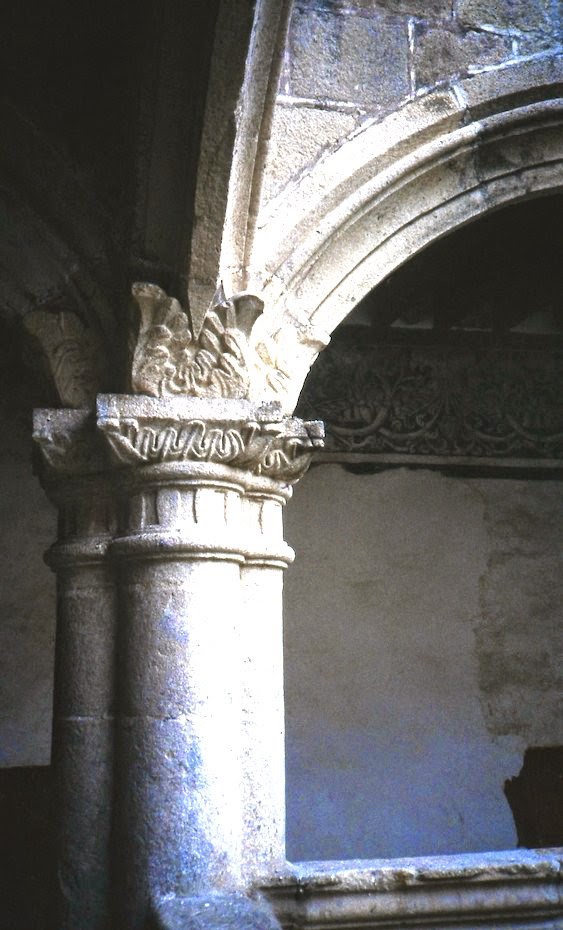 Their feathered scrolls swell like bulbs and curl up to embrace the rising curves of the arches—a striking effect that is amplified in the corner piers of the two story cloister. 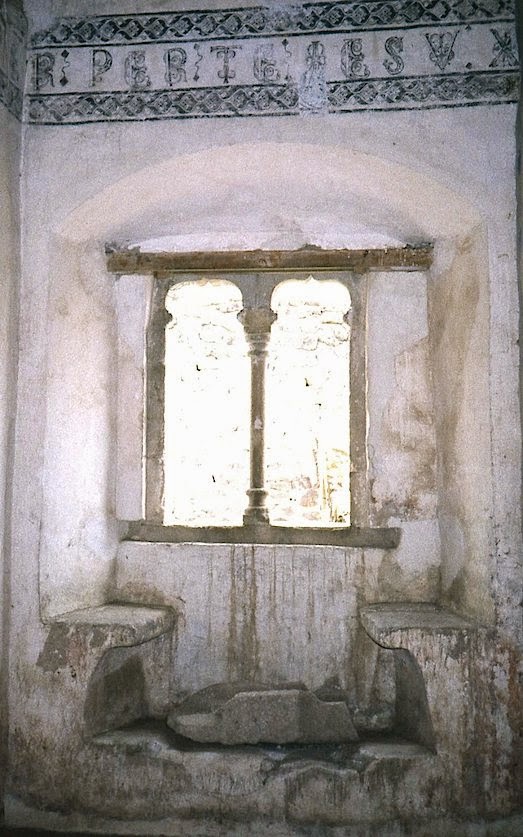 Mullioned Venetian style windows in the long corridors of the upper cloister frame vistas of the bare surrounding hills.

The Murals
Almost every surface in the Epazoyucan convento—walls, vaults, niches, friezes and even the door frames—was covered with frescoes.  Among the richest and most program of 16th century mural decoration to survive in Mexico, most of the frescoes have been restored by INAH, the government agency in charge of historic sites.
The murals fall into two main groups, the cloister frescoes, and those in the former Sala de Profundis. 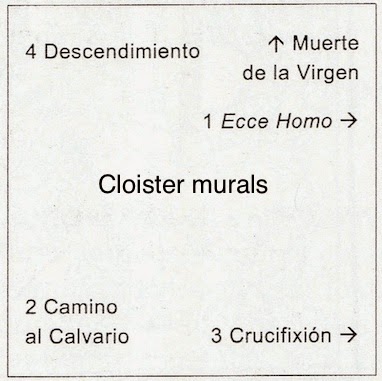 The Cloister Murals
Most of the narrative murals along both the upper and lower cloister walks have been erased save for their decorative bands and grotesque borders, which display complex patterns of ribbons, vines, fruit, flowers and birds as well as the ornamental lettered friezes favored by the Augustinians. 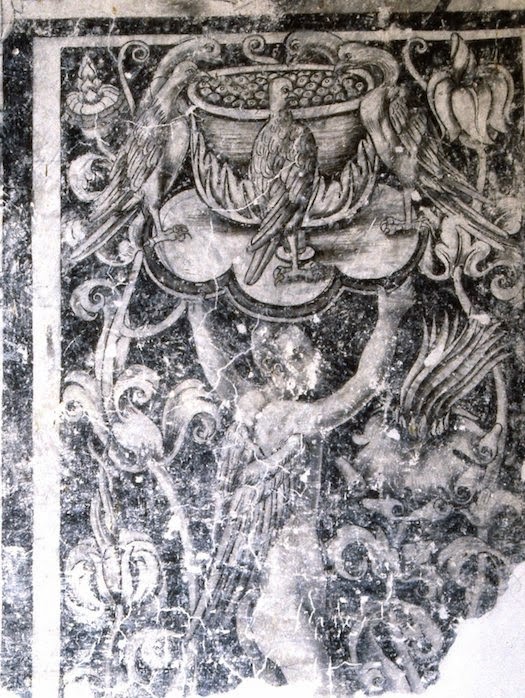 The sole survivors are the four scenes of Christ’s Passion in the corner niches at the end of each walk. Originally monochromatic, the murals were much later crudely accented with blues, reds and ochers.
A native artist skillfully transposed and enlarged these scenes from various European print sources—French, Flemish and Italian engravings—to the grander scale of the monastery walls, thereby enhancing their graphic power.
As we enter the cloister from the west we first confront the Way of the Cross or Road to Calvary. In this dynamic composition, derived from a well known print by the 15th century German engraver Martin Schongauer, the head of Christ is wrenched awkwardly to one side of the cross to face the viewer, dramatically focusing on his suffering. 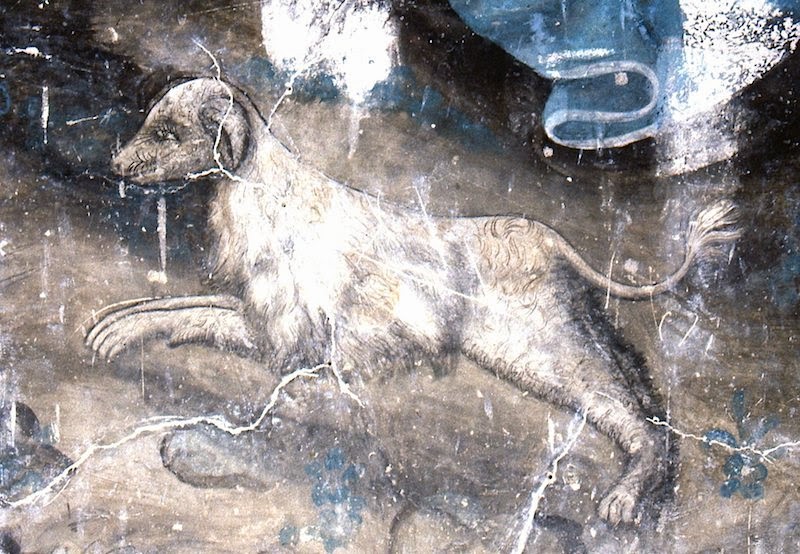 The fresco is crowded with incident and anecdotal detail—note the little dog trotting by unconcerned in the foreground.
By contrast, the Crucifixion or Calvary scene in the southwest niche is more static. The two Marys, elegantly robed and elongated in the Mannerist fashion, seem emotionless, as is the calm look on the face of Christ.  Turreted buildings dot the landscape in the background, which mirrors the distinctive local topography.

In the Ecce Homo portrayal of the south east corner, the surprisingly unscathed, near naked figure of Christ looks out almost serenely beneath the crown of thorns, accompanied only by a turbaned man who opens Christ's robe, lending movement to the scene.
Here much of later added color has been removed to better reveal the original lines, although there is no landscape as in the other scenes. One unusual indigenous detail is the large corn plant that Christ is holding.
Here, the attenuated body of Christ, lowered from the cross is surrounded by the stricken faces of his family and friends. The Lamentation is crowded with figures.  Five are saints, as evidence their haloes. From the left, these are John the Evangelist, standing, and the three Marys, plus Mary Magdalene—the latter holding Christ's head, although she may alternatively be the figure in a red robe. The Virgin is of course in blue and the other two are Mary of Cliopas and possibly St. Anne in the background. The third woman may be Mary Salome, Mary, mother of James; or Mary of Bethany.
The two secular figures standing on the right are Joseph of Arimathea and Nicodemus. 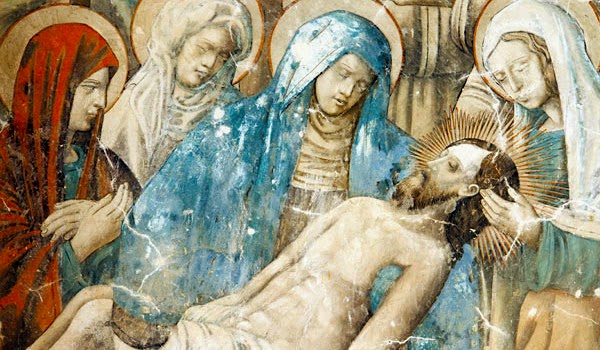 Here too, the background landscape includes identifiable local formations including the prominent peak of Cerro Epazoyu for which the town was named. 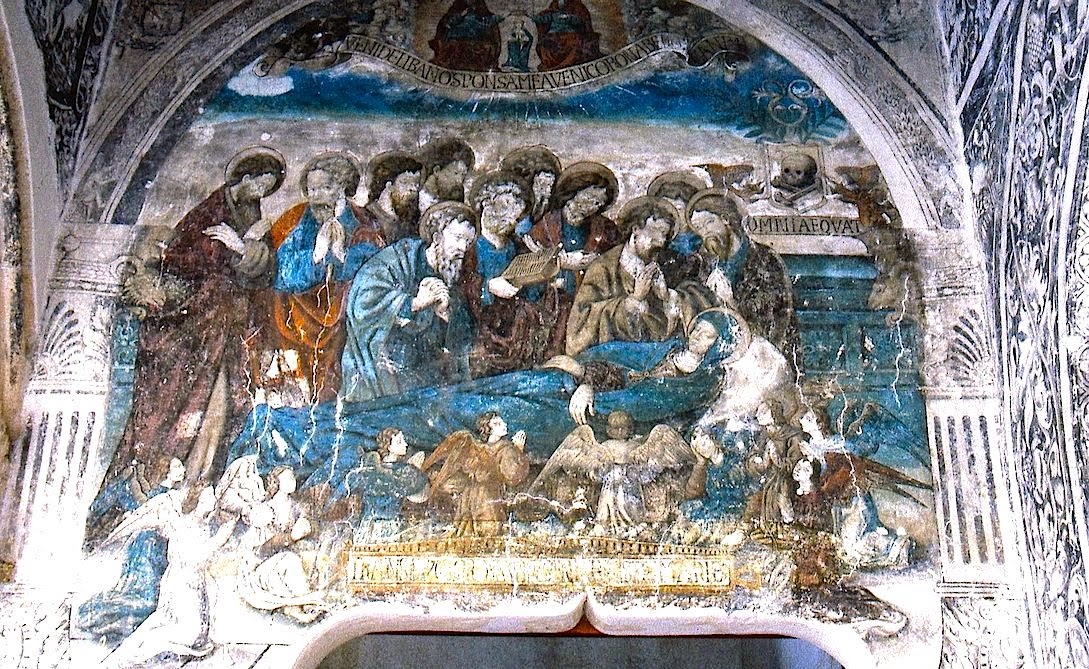 The other remaining mural in the lower cloister, above the stairway entrance to the upper level, is an extended portrayal of the death or Tránsito of the Virgin Mary.  The blue robed Virgin, laid out on her bier, is attended by a group of solicitous Apostles and a flock of ten mournful, praying angels below.
The Holy Trinity appear in the heavens, above an inscription from the Song of Songs. 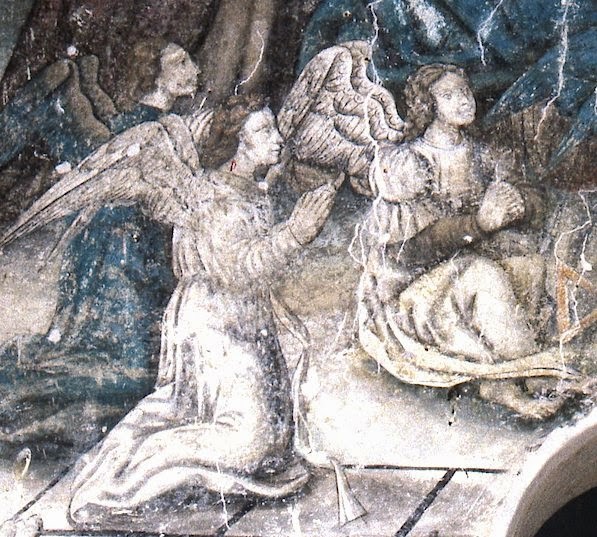 For our next, final post on Epazoyucan we describe and illustrate the superb sequence of murals in the former Sala De Profundis, or friars chapel.

text and images © 2015 Richard D. Perry. except where noted