We start our June posts with a series on a group of late baroque altarpieces by the 18th century Mexican sculptor and designer Pedro de Rojas.

The altarpieces of Querétaro represent the culmination of the ornate baroque style in 18th century Mexican art. Among the leading designers and fabricators of these master works was the Mexico City native Pedro José (or Joseph) de Rojas.  Born in Mexico City around 1700, he moved to Querétaro in his mid twenties and remained there for the rest of his working life.

Together with fellow queretano architects and designers Mariano de Las Casas and Francisco Martinez Gudiño, he designed and worked on numerous retablos, notably for the nun's churches of Santa Clara and Santa Rosa de Viterbo, often personally creating many of their constituent sculptures and statuary.
Rojas' work, however, was not confined to the city of Querétaro. He contacted for and completed several other commissions both in other Queretaran communities and further afield in Guanajuato.
Although many of these altarpieces have not survived—victims of neglect, destruction by fire or vandalism, or simple changes of fashion— several can still be seen and admired, in most cases the beneficiaries of recent restoration.
In a series of posts on this blog we will describe each of these magnificent survivors in turn.
For our first page we look at what is considered the finest, the best documented and the most complete among the Rojas altarpieces, as well as most wholly the work of the designer: that in the principal church of Cadereyta. 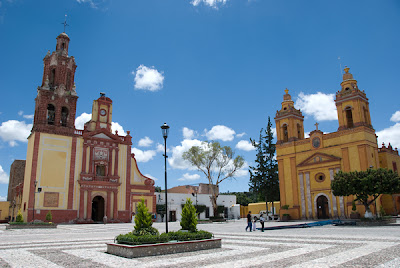 The handsome neoclassical facade of the church of St Peter and St Paul faces a sunny, paved plaza in this crossroads town to the southeast of the city of Querétaro.  Although much altered over the years the church retains an archaic 16th century stone cross densely carved with the face of Christ and other Passion symbols.

But the chief attraction at Cadereyta is its sensational gilded altarpiece which entirely fills the apse at the east end of the church. As commissioned in the original contract dated 1752, this has been documented as the masterwork of the celebrated sculptor and designer Pedro José de Rojas.
It is a classic statement of the elegant Queretaran baroque, an ornate, regional variant of the Mexican Churrigueresque or barroco estípite style in architectural and altarpiece design that flourished in the mid-1700s. 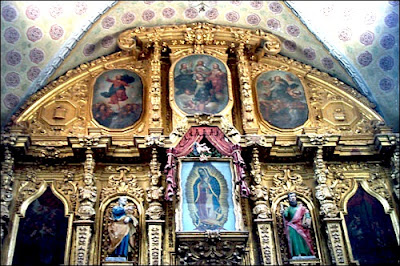 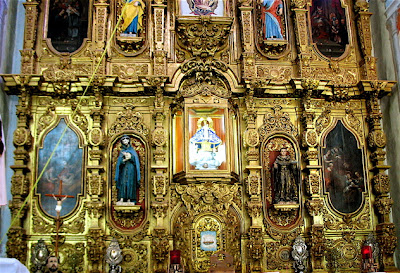 Narrow estípite pilasters, built up of varied design elements including herms, cartouches and bands of foliage, divide and separate each of the three tiers of paintings and statuary.
The latter are contained, respectively, within ornamental but restrained, Moorish inspired frames and niches, whose modest profile, together with the discreet pilasters and intervening gilded filigree ornament, combine to create an overall, tapestry like effect—the distinctive feature of the Queretaran style.


Of the five statues of saints, those of the principals, Saints Peter and Paul, housed on the middle tier, are believed to have been carved by Rojas himself.
The sculpture of St. Paul is especially powerful, a commanding, bearded figure in the Mannerist mold, with a strong, expressive face, assertive stance and boldly chiseled robes. The staid figures of St. Francis and Nicholas of Tolentino—the patron saint of Cadereyta—on the lower stage, may also be from Rojas’ workshop, but seem to lack the vitality of the master’s touch.
A modern painting of the Virgin of Guadalupe occupies the curtained center niche, surrounded by a group of superior 18th century paintings, recently restored and attributed to the Queretaran artist Pedro José Noriega, that illustrate scenes from the lives of Christ and the Virgin Mary in a lively style using a palette of warm, luminous colors.