As we saw in our earlier post on Cadereyta, Pedro de Rojas' work as a sculptor and retablista was not confined to the city of Querétaro. He contracted for and completed several other commissions in neighboring Guanajuato.
Some of his finest altarpieces survive in the magnificent Augustinian priory church of San Agustín in Salamanca, Guanajuato. 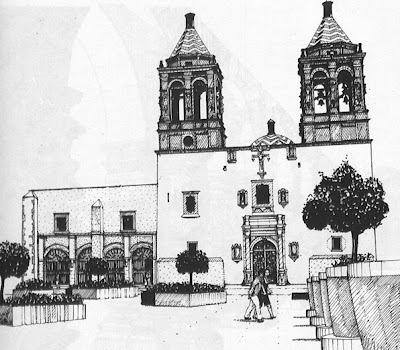 The gilded retablos lining the nave and transepts of this church establish this as one of the most spectacular late baroque interiors in Mexico.
Among a group of extraordinary altarpieces, two especially push the envelope of the so-called Mexican Churrigueresque style to its extreme.
The transept retablos of St. Joseph and St. Anne, facing each other across the church are remarkable for their lifelike tableaux illustrating episodes in the lives of the titular saints, and widely considered among the finest ensembles of 18th century figure sculpture in Mexico.
Attributed to the master sculptor Pedro José de Rojas, in cooperation with the noted regional architect and designer Mariano de Las Casas, their intricate structure, based on highly ornate estípite pilasters and sculpture niches, are almost lost in a profusion of opulent rococo and mudéjar inspired detail.
It appears from the contract documents that both altarpieces were fabricated in Rojas' main taller in Querétaro, and shipped by cart in sections to be assembled in place.

In this post we look first at the altarpiece of St. Joseph: 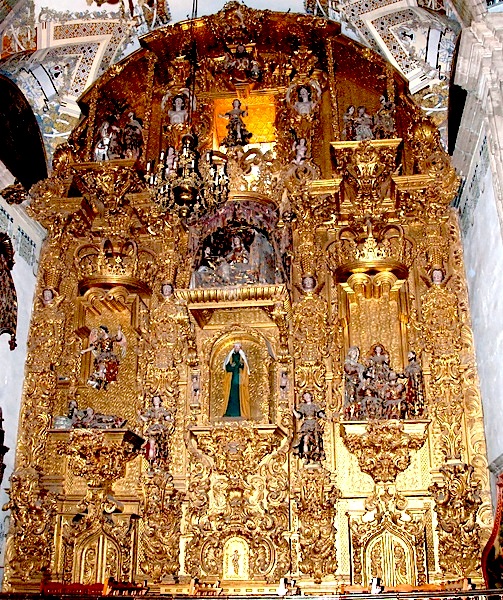 The gilded altarpiece of St Joseph is virtually identical in form to the Santa Ana retablo, although some feel that the sculptural quality of the figure sculpture is superior in this later retablo—thought to be Rojas’ last major work. The tableaux depict scenes from the life of St Joseph, set in ornate, elongated niches.


A moving and rarely depicted study of Christ at the deathbed of a gaunt St. Joseph occupies the center niche. This is flanked by Christ among the Doctors with St Joseph on the right, and a solemn Dream of Joseph, below on the left, in which the Archangel Gabriel gestures gracefully to the sleeping saint. 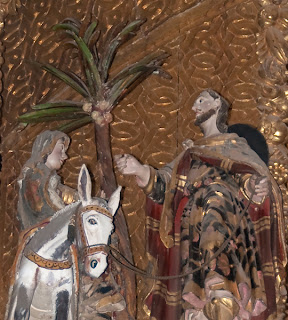 Although less sumptuously framed and difficult to see clearly due to their elevation and back lighting from the nave window, the gable reliefs are no less masterly.


The Marriage of Joseph and Mary on the upper right is matched on the left side by a delightfully anecdotal Flight into Egypt, complete with donkey—


All the reliefs are in good condition although in need of cleaning.

For more on the arts and architecture of Salamanca:
Posted by Richard Perry at 3:24 PM