Water, its management, provision and distribution have always been vital to life and civilization in Mexico, never more so than in the colonial era, when flooding and droughts were common crises.

In this new series of posts, entitled Water, Water we showcase a variety of colonial artifacts and devices that dealt with water—aqueducts, fountains, baptismal fonts and basins, with a focus on their distinctive forms and decoration.
We start our exploration with the city of Acámbaro in the southern part of the state of Guanajuato.
Acámbaro is rich in colonial history and boasts many extraordinary monuments designed to deal with water management, including bridges, an aqueduct and assorted fountains in a variety of styles.

As early as 1527, the lack of potable water for the growing population of the newly founded Franciscan mission town became acute, despite its location near the Rio Lerma.

Fray Antonio de Bermul conceived the radical solution of bringing water from the springs of Tócuaro, some kilometers away.  Construction of an aqueduct proceeded apace and by 1532 was complete, together with storage basins, or tomas de agua, linked to several fountains in the town.

The aqueduct, most of which still remains, ended in a public fountain which also marked the colonial boundary of the city. This is commemorated by an octagonal monument, known as the humilladero, which also served as a storage tank, together with an adjacent public fountain.


Mounted above the basin is an unusual carved stone cross, la cruz de la pila, which may have originated in the Franciscan monastery here

The best known of the Acámbaro public fountains is the so-called Fuente Taurina,  located beside the  Franciscan convento and its 16th century, Plateresque style Royal Hospital Chapel. 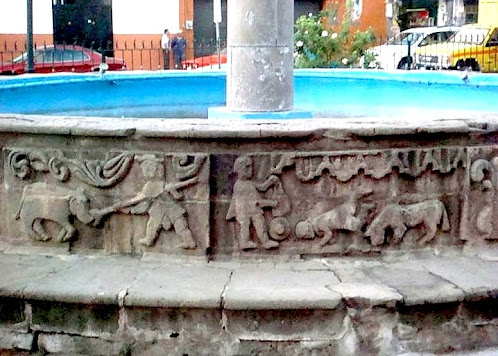 Also dating from the 1500s, La Fuente Taurina, as the name indicates, celebrates the bullfight—reputedly commemorating the first corrida to be held in Acámbaro and one of the earliest recorded in New Spain.
Carved in tequitqui style, it portrays detailed scenes of a rustic corrida de cimarrones, as well as playful reliefs of fish, seashells, grotesque masks and even an Aztec speech scroll.
The column at its center with the Mexican eagle is a later addition. 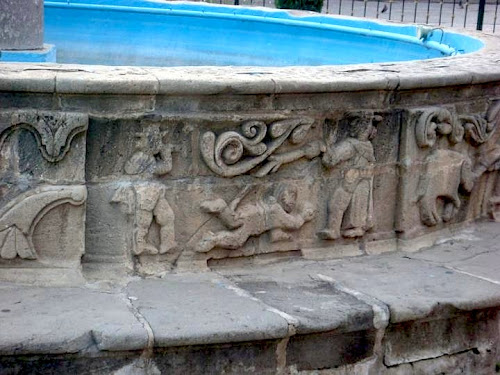 Two other pilas of interest can be found in the precincts of San Francisco itself:
First the grand baroque fountain in the cloister, with its extravagantly festooned centerpiece. 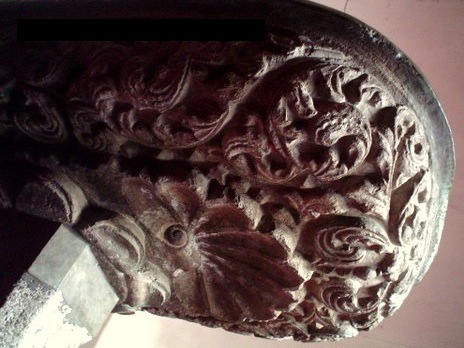 Then, in the church itself, an early, monolithic baptismal font,
densely carved with foliage and shell motifs


Lastly, the other principal city fountain, now a centerpiece of the main Hidalgo Market, is popularly known as La Fuente Morisca because of its neo-moorish style of the late 1700s, replete with shells and rococo scrolls,

For more information on the colonial arts and architecture of Guanajuato, consult our guidebook, Blue Lakes & Silver Cities, available from Espadaña Press

Look for our forthcoming guide to Mexican Carved Stone Crosses.
Posted by Richard Perry at 4:29 PM