Water, Water: The City of Querétaro 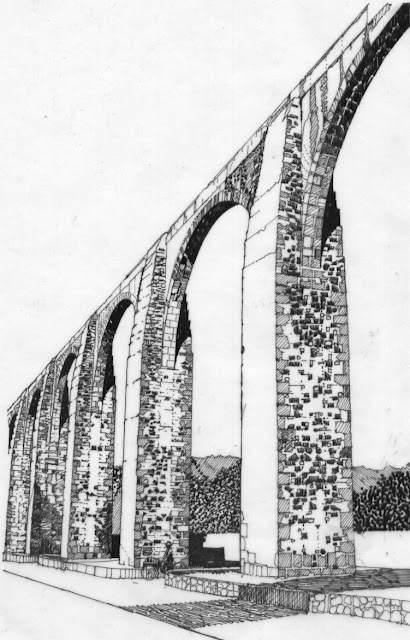 On October 17, 1738, the city of Querétaro exploded in a frenzy. Enthusiastic crowds from every class of society filled the streets with colorful processions, overjoyed to see water bubbling from fountains all across the colonial city.

A jubilant group of Indians gathered outside the mansion of the Marqués del Villar del Aguila—the guiding force behind the spectacular aqueduct, that had, at long last, brought fresh water to the parched city.  To the sound of the teponaxtle, or native drum, they regaled residents with songs of praise for the recently deceased marquis, including verses extolling the role of indigenous peoples in the project and in the life of colonial Querétaro.

As chief benefactors of Las Capuchinas convent, the marqués and the marquesa had heeded the requests of the concerned sisters for a supply of clean water for the growing city. Twelve years earlier, he had provided funds for a long aqueduct to bring in spring water from the ancient settlement of La Cañada, some nine kilometers distant, personally supervising the construction and even laying stones with his own hands.

Now partly restored, the elevated structure comprises 74 arches—some as high as 90 feet—entirely built of the honey-colored local stone. Although it no longer carries municipal water, the colonial aqueduct is still an imposing sight as it sweeps into the city from the hills to the north.

Although the initial section lay underground, the final stretch of the channel ran atop a long arcade that stretched almost five kilometers down into the valley. The aqueduct terminated at the Caja de Agua, near the Santa Cruz monastery.

From the Caja de Agua, water was released to Querétaro’s numerous and highly varied fountains, many of them located in public plazas as well as the cloisters of the city’s churches and private residences.
Here are some of the most distinctive:

Posted by Richard Perry at 8:57 AM