In the colonial era, water management was designed to sustain and enhance life in the local mission and the community.
However, modern, large scale water management practices, primarily the damming of rivers and water sources, have often had the opposite effect, isolating, disrupting and even uprooting long settled communities.
In several cases this has entailed the flooding and even submerging of village churches established since early colonial times.
We continue our Water series with a look at a few of these victims of progress, starting with the old Dominican mission of Quechula, in Chiapas.

With the construction in the 1960s of the Malpaso hydroelectric dam across the Grijalva River in the Zoque region of northern Chiapas, several river communities were inundated and their inhabitants relocated.  Chief among these was the ancient village of Santiago Quechula.
Quechula was evangelized by the Dominicans in the mid-1500s and chosen as the site for a mission town. Initially a simple visita, subject to the grand priory at Tecpatán, it later became a major mission in its own right.
By the early 1600s, an imposing church and convento had risen in Quechula. Related architecturally to other Dominican missions in the Zoque region, the Quechula church front displays several distinctive features, notably its double choir window and large archway enclosing the recessed west porch. Massed pilasters with sculpture niches enliven both the lower and upper facade, the latter originally crowned by a grand triangular pediment.
Other Dominican stylistic features include the prominent exterior running cornices and the classic cylindrical exterior stairway. 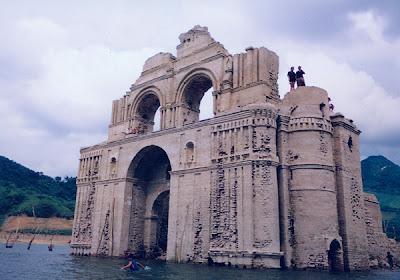 Although roofless and partly ruined by the late 1900s, the facade remained intact. Submerged beneath the rising waters, it seemed that the church would be lost to view forever.
In 2002, however, because of drought conditions in the region and the seasonal need to relieve pressure and release impounded water to the parched communities downstream, the lake level behind the dam was dramatically lowered.

For the first time in 40 years, the church was exposed once more. Townspeople from the new settlement of Nuevo Quechula, as well as many former natives from other communities, made a pilgrimage to their ancestral village to view the remains of the colonial church and pay their respects to Santiago, their beloved patron saint.
Men and women who had left the area as children returned as grandparents, arriving by canoe and celebrating the re-emergence with music, dancing and prayers. 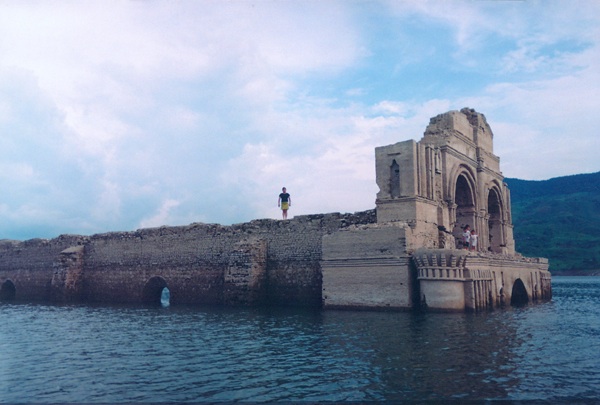 Although the waters have since risen again and the church is once more submerged, its seemingly miraculous reappearance is destined to become just a memory.  "The water wiped out everything," said Don "Gilito" Vasquez, a 100 year old former resident who had returned, "and now, the monastery is time's only witness." 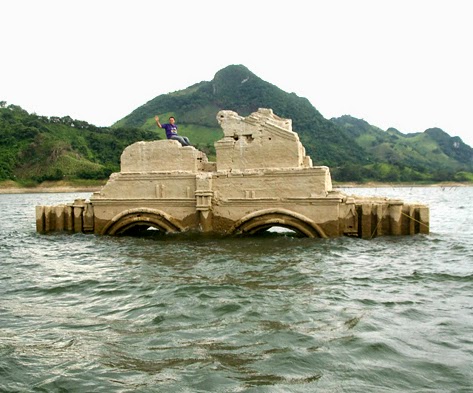 2014 update:
Our intrepid correspondent Niccolò Brooker revisited Quechula this summer. As predicted, the waters behind the dam have risen again, however, the tip of the church front is still in view, enough for our man to get a foothold!

2015 update:
In October 2015, drought conditions have lowered the water level behind the dam so that the drowned church of Santiago Quechula has once again partially resurfaced, allowing another brief view of this early Dominican mission.

for more on the arts and architecture of colonial Chiapas, consult our guidebook

Posted by Richard Perry at 3:41 PM