For our second post on Yanhuitlan we look inside the church, which holds an extraordinary assemblage of colonial art. We focus first on the altarpieces which display a range of styles that span the viceregal era.

The lofty main retablo is one of the great masterpieces of Mexican art, towering 70 feet to almost touch the coffered vault of the apse. Having suffered serious deterioration, the retablo structure was recently stabilized and strengthened, and restoration of the framework, paintings and sculptures is near completion.


A majestic coffered half dome covers the apse. Each coffer contains an eight-pointed golden star—the celestial symbol of St. Dominic—shining forth against the dark blue of the vault.
The broad triumphal arch framing the sanctuary is exuberantly ornamented with ornate stucco reliefs, probably executed in the early years of the 17th century by Pueblan artisans. The figures of St. Peter, St. Paul and several archangels emerge from a web of interwoven strapwork.
The magnificent altarpiece presents a screen-like profile with lateral wings projecting outwards to the nave. In the 17th century, the original 16th century frame was remodeled in baroque style, with spiral columns of twisted vines, shell niches and a profusion of ornate scrollwork and carved foliage. Gilded columns divide the retablo into seven vertical bands, or calles, with alternating paintings and sculptures, which mostly date from the earlier, 16th century altarpiece.
The principal paintings have been identified as the work of Andrés de Concha, the celebrated painter, sculptor and designer from Seville who traveled to Mexico in 1568, under commission by the encomendero Gonzalo de Las Casas to supervise the creation and installation of the altarpiece. (Before and after completing the Yanhuitlan altarpiece in 1579, De Concha worked extensively in Oaxaca, on retablos for Teposcolula, Coixtlahuaca, Tamazulapan, Tlaxiaco as well as later for Santo Domingo and the cathedral in the city Oaxaca, often in collaboration with the Flemish artist, Simon Pereyns.)  De Concha painted in the Mannerist style of the Andalusian school, noted for its subtly mellow colors. The paintings at Yanhuitlan are considered the earliest, the most complete, and the finest of his Mexican oeuvre. Their Renaissance composition is enlivened with hints of baroque drama in the realistic Spanish manner.
Among the 13 panels, now largely cleaned and restored, we find familiar episodes from the lives of Christ and the Virgin placed broadly in chronological order as they rise, although some may have been misplaced during later changes to the altarpiece. The subjects are compelling, and the figures are grouped to create dramatic intensity with attention paid to facial expressions and graceful gestures. 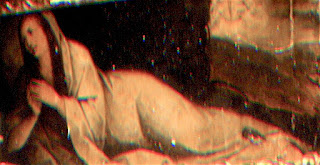 The penitential saints Jerome and a langorous Mary Magdalene appear on the base panel, or predella.
On the first tier above the predella, a theatrical Annunciation scene contrasts an energetic Archangel Gabriel, bedecked in flying drapery, with the serene figure of the Virgin Mary at prayer.
The Adoration of the Shepherds, on the right, captures the awe of the rustics, who gaze upon the Christ Child floating in the foreground. One of the shepherds is wearing Indian sandals. By way of contrast, the Adoration of the Magi on the next tier portrays splendid personages in luxurious costumes.
On the third tier the themes shift from Christ's birth to events following his death with depictions of the Resurrection, Ascension and Pentecost.
The panels on the fourth level include a luminous Virgin of the Rosary, ringed by miniatures of the Mysteries of the Rosary. Among the pious worshippers assembled at her feet are  members of Spanish colonial society. The church hierarchy is to the left, including the pope, a bishop and a Dominican friar. The remains of Gonzalo de Las Casas and his family, the benefactors of Yanhuitlan, reputedly rest in niches behind the retablo.
Sixteen handsome statues, monumentally carved in dignified poses and set in shell niches, complement the paintings.  The figures come in fours: the Four Evangelists, the Four Founders of the religious orders, the Four Doctors and the Four Fathers of the Latin Church. St. Dominic, the patron saint of Yanhuitlan, stands alone at the top.
Attributed to Simon Pereyns, the hands and faces are expressively detailed, although the brilliant estofado treatment of the draperies may be the result of later retouching.
No less than ten side altarpieces, large and small, and in varying states of repair line the nave. They run the gamut of colonial styles from Plateresque to Churrigueresque. The altarpiece of La Soledad (The Virgin of Sorrows) is thought to be the work of de Concha, as may be its graceful statue of St Christopher (sans staff and Christ Child.)
text and images © Richard D Perry, except where noted

We would like to acknowledge the wonderful scholarly work done recently
on Yanhuitlan by Alessia Frassani
Posted by Richard Perry at 10:23 PM