To conclude our series on Yanhuitlan, we look at the convento and its various components.

A huge basket handle archway, set at the top of a broad flight of stone steps beside the church, spans the stage-like portería, which may have functioned as an open chapel in the early years of the monastery.

At its rear, relief rosettes and urns frame the entry to the convento, which is surmounted by the Dominican cross and emblazoned with the motto of the Order, “Therefore We Preach Christ Crucified.”


The restored two-story cloister is the heart of the convento. Although the ancient cypress tree that once shaded the patio has been replaced by a tiled compass pattern, the stone-flagged walks still offer a traditional haven for meditation, despite having lost much of their ancient patina. 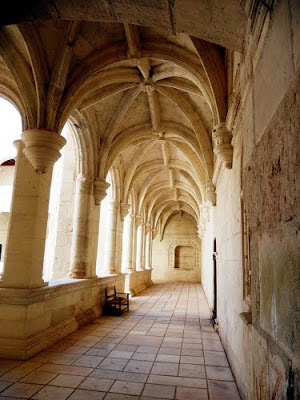 Finely carved stonework distinguishes the elegant lower cloister. Smoothly molded arcades rest on compound piers of Doric half columns, faced with sturdy prow buttresses. Ribbed vaults cover the five bays on each side, increasing in complexity above the corner compartments.
As in the church, the vaults spring from rounded corbels set in a running cornice along the inner walls. Diminutive roof bosses, carved with the eight-pointed Dominican star, are recessed into the ceiling at each corner. Large, rosette-studded niches at the end of each walk formerly housed sacred images for the contemplation of the friars as they perambulated the cloister. 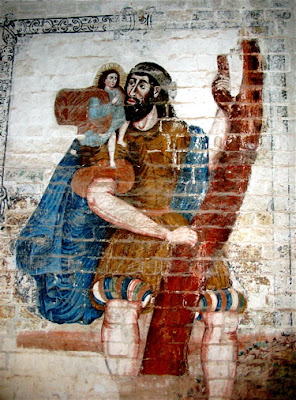 From the entry vestibule, a monumental stone staircase winds around the adjacent stairwell, its heavy stone rail topped with globes and fleur-de-lis finials.

A striking fresco of St. Christopher stands above the stairs—the only intact mural to survive in the convento. Carrying the Christ Child on his shoulder, the saint strides from the stormy torrent, observed by a diminutive friar holding out a lantern—a portrait, according to local lore, of Fray Bernardino de Minaya, the pioneering Oaxacan missionary.
Notwithstanding its awkward bodily proportions and the rigid folds of the saint’s drapery and pantaloons—in contrast to the elegant statue of the saint in the church—the mural projects an iconic force.


Two wall confessionals, their openings also outlined with bands of rosettes, link church and cloister along the north walk. And on the east walk, a noble pedimented doorway with unusual spiral pedestals originally gave access to the Sagrario Chapel.

At the far end of this long, dimly-lit chapel is a rare painted altarpiece reputedly carved entirely from alabaster, or Mexican onyx.
Framed in the Dominican fashion with slender baluster columns and a flattened arch ornamented with rosettes, the central relief depicts the Descent from the Cross—an insistent motif at Yanhuitlan.
St. John and the Three Marys mourn the dead Christ, whose limp body is gently lowered by turbanned figures. Despite its somewhat stilted, two-dimensional aspect—a reflection of the Italian engraving from which the anonymous native sculptor worked—this tableau achieves great expressive power.


Built of brick, the upper cloister walks have wood beamed ceilings instead of stone vaults. Rows of friars’ cells open off the corridors behind the walks. Although the partitions between most of the cells are gone, some of the picturesque window seats remain.

Dominican insignia are carved on the lintels of each cell doorway and include such emblems as the hand of St. Catherine of Siena holding the heart of Christ, St. Thomas Aquinas holding a church and book, and the Five Wounds of Christ superimposed on the Cross of Alcántara.
The reinstalled museum, in the long gallery to the right of the entrance foyer, displays an extraordinary collection of religious artifacts, including painted wooden angels belonging to the barrio chapels of Yanhuitlan.
One of the most evocative of the figures in the collection is the macabre image of Death Enthroned. Fashioned in part from a human skeleton, it is a powerful artifact of the folk imagination.
The town of Yanhuitlan has eight traditional barrios, each with its special image of Christ under the care of a religious confraternity.  These are lightweight cristos de caña, designed to be carried in procession on special feast days with its accompanying statue of an archangel. Some of these cristos and angels are in the museum, and two stand in the church.
The most famous of these figures, El Señor de Ayuxi—patron of the principal religious fiesta in Yanhuitlan—resides in the barrio chapel of El Calvario, located north of the monastery.

For more on Yanhuitlan and the colonial churches of Oaxaca, consult our illustrated guide book.

Look for our future posts on the church of San Felipe Neri in the city of Oaxaca.