This is the first of two posts on the church of San Felipe Neri in the city of Oaxaca.  Our first page looks at the extraordinary facade, and the second on the interior and its colonial art treasures.

The Oratorian Order was founded in the 1500s by the Roman mystic Filippo Neri, devoted to upholding the tenets of the Catholic Counter Reformation. The Oaxaca church, established in 1661 by the Oratorian pioneer Juan de Aragón, was among the first foundations of this conservative religious order in Mexico.
Construction of the present church and its adjoining hospital, however, was delayed until the 1730s and not completed until 1803, when the towers were added. 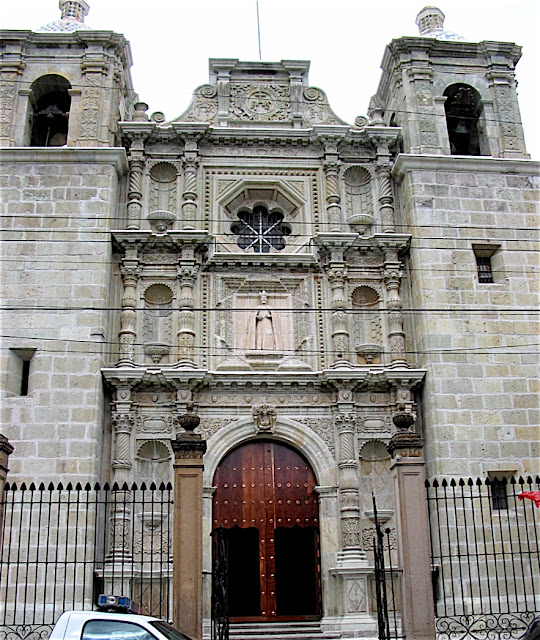 The Facade
The south-facing church front, newly restored in dazzling white stone, is a landmark of the distinctive Oaxacan baroque. From its tiny forecourt, the facade seems to soar heavenwards.

All three tiers of the facade feature neo-Plateresque Corinthian columns, embellished with filigree strapwork and bulbous candlestick shafts, creating richly textured surfaces. Elaborate but now empty shell niches with sculpted corbels fit between the columns. Ornamental volutes frame the gable, which encloses a relief cross entwined with the monograms of the Holy Family. 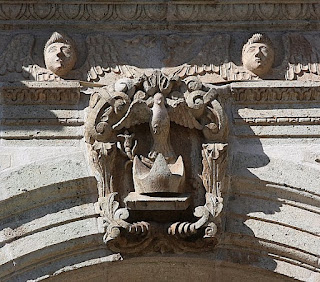 Above the keystone of the doorway a bold relief of the dove of the Holy Spirit, perched on the Oratorian biretta, lifts the eye to the foliated spandrels and a carved frieze of winged angels above.

for more on the colonial arts of Oaxaca, consult our new guide

Posted by Richard Perry at 5:08 PM