Pilas in the eastern part of the state are relatively fewer and lack the rich, decorative variety of those in western Michoacán.
Those that survive, however, are quite distinctive and include examples of fountains used as baptismal fonts.
Spouting lions also ornament this lower basin of a disused 16th century fountain at Tiripetio, near Morelia.  The smaller upper basin also survives, carved with grotesque mask spouts.
Like that of San Agustín in Morelia the fountain was no doubt originally installed in the monastery cloister—a section of the priory largely destroyed but scheduled for reconstruction.
San Matias El Grande

Known principally for its unique churchyard crosses, the church at San Matias also boasts two carved stone fonts.
Dating from the 1700s, although 16th century in style, the cup like basins are decorated with sparse floral reliefs and dedicated by cursive inscriptions to San José and the Holy Sacrament (not shown)
A unique feature of the fonts is that they are signed by the stone mason Juan Diego Flores, who also carved the crosses. 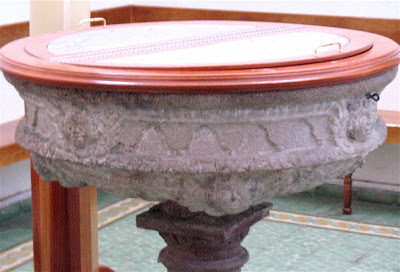 In other examples, angel heads decorate this worn baptismal font at Tlacotepec, a barrio of Tlalpujahua near the border with Mexico State. 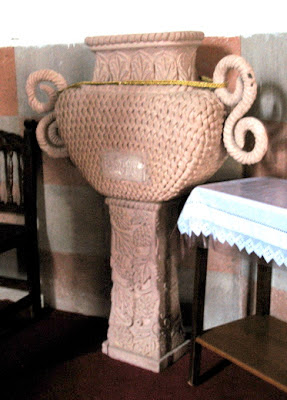 A carved column or base of an earlier font supports this fanciful, basket like pila of more recent vintage at Tuxpan.


text © 2013 Richard Perry.   images by the author, Diana Roberts, Niccolo Brooker and others
Posted by Richard Perry at 9:06 AM