In our previous post on the city church of San Felipe Neri, we noted a group of retablo paintings by the 18th century Oaxacan artist Marcial de Santaella.  In this post we look at a group of three larger paintings by Santaella to be found in Oaxaca cathedral. Two of them hang on either side of the cathedral entry and the third in the sacristy.
Recurring temblors throughout the 1600s took a heavy toll on Oaxaca cathedral along with many other buildings in the city. Starting in 1702 much of the cathedral, including the present front, was rebuilt  virtually from the foundations.  Despite continuing seismic activity the cathedral was finally completed under the supervision of local architect Miguel de Sanabria and re-dedicated in 1733 with great ceremony.
Among the new works of art created to adorn the new building were three large paintings by Marcial, the most prominent in a family of indigenous artists including his brothers Agustín, Pedro  and Francisco.  Santaella's work is generally in a popular vein, with a light Rococo touch, appealing colors and considerable charm, especially in his portrayal of angels and domestic scenes.
His cathedral paintings illustrate three common themes in colonial art:
This is one of two portraits of the Seven Princes, or Archangels found in the city of Oaxaca. The other, by the noted baroque painter José de Páez, hangs in the eponymous church of the Capuchin nuns.

The Santaella painting is notable for its brightly clad, elongated figures in neo-Mannerist style. They are portrayed with almost feminine features that contrast with their sturdy buskined legs.  The Holy Trinity is shown prominently overhead.
Portraits of St Christopher carrying the Christ Child across the waters are common in many colonial era churches, usually located on the north side of the nave, symbolizing the bringing of Christianity to the New World.
This example by Santaella, again in a forthright popular style, is dated 1726 and includes the Virgin Mary overlooking the scene.
Perhaps the most ambitious of Santaella's works in the cathedral, it is the least accessible. This is the grand semicircular painting of the Triumph of the Church and the Sacrament, dated 1735 and now hanging over a doorway in the sacristy.   Once again, the Trinity is depicted in the curved upper section.
The composition, like most versions of this Counter Reformation theme, is based on a celebrated work by Peter Paul Rubens, now in Madrid. 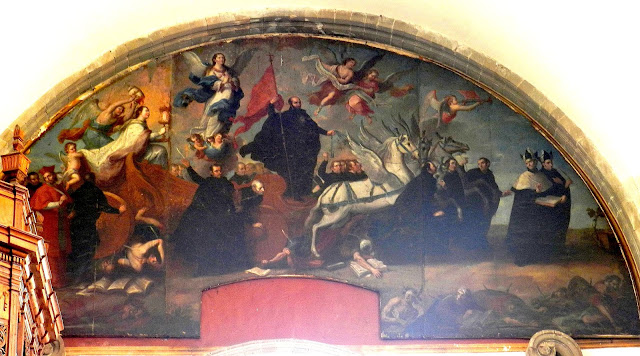 There is also this version, in the sacristy of La Compañía in Guanajuato, in which the Triumph of the Church is led by the Jesuits under St Ignatius.
Text © 2013 Richard D. Perry
Images by the author and others including El Conde de Selva Nevada.

for more on Oaxaca cathedral and the colonial arts of Oaxaca, consult our guidebook.
Posted by Richard Perry at 5:00 PM