In an earlier post we looked at some of the diverse baptismal fonts and fountains of colonial Oaxaca.

Here we turn to the wide variety of colonial stone fonts (pilas) to be found in Michoacán. First we survey those of western Michoacán, and then those in the eastern half of the state. 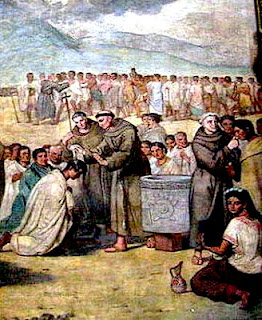 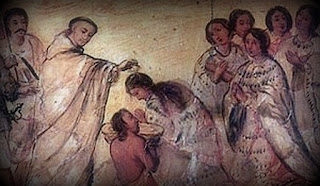 In the first years of evangelization in Mexico, native water vessels and basins were used or adapted for Christian baptism, whose modes of stone working and even decorative imagery carried over to the early dedicated baptismal fonts and holy water basins commissioned by the friars.

As with the stone crosses of the region, the carved pilas of Michoacán display a variety of sculptural relief, mostly consisting of stylized foliage including rosettes, vines and flowers, often infused with pre hispanic forms, and closely related to foliated and grotesque motifs also found in mural, friezes and carved door frames, etc.


This baptismal font at Jaracuaro, a former island of Lake Patzcuaro, is typical. The principal ornamental feature around the basin is the rosette, here with flared, fleurs-de-lis like petals. These are framed by the knotted Franciscan cord, above and below, and feather like vertical divisions recalling the plumed serpent of ancient Mexico (see the Oaxacan fonts at Yanhuitlan and Tiltepec.)

Larger fleur-de-lis alternate with star shaped rosettes around the basin of this pila at San Felipe de Los Herreros, and on related baptismal basins at Aranza and Tancítaro (pictures to come)

This old painted pila at the venerable Franciscan monastery of Tzintzuntzan, also beside Lake Patzcuaro, again features the knotted cord and flared rosettes, although the vertical dividers have morphed into sprays of foliage.

Feathered elements also divide this pila at San Nicolás, near Morelia, although the intervening plant motifs are more elaborate with leaves, seeds and flowers. 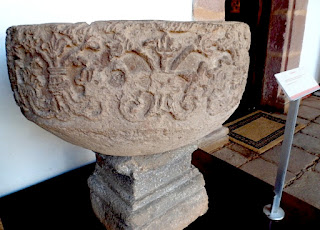 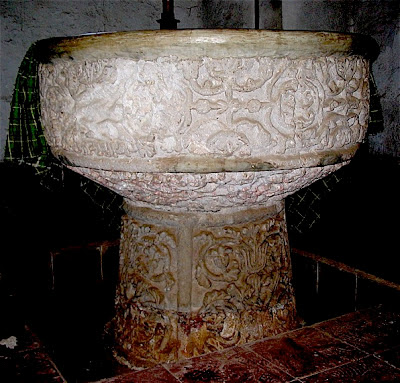 Related but even more complex foliar motifs crowd the surfaces of this baptismal font at nearby Undameo. 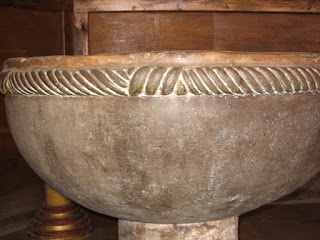 Some fonts are much plainer, including this one at Erongarícuaro, also beside Lake Patzcuaro, adorned only by the knotted cord on the rim, and below, this more recent pila at Tarecuato. 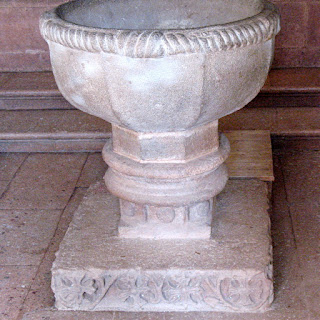 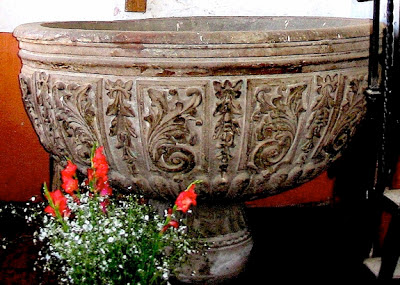 Earlier traditions of decoration were adapted in later examples like this grand pila at Angahuan, which doubtless replaced an earlier font.

text © 2013 Richard Perry.   images by the author, Diana Roberts, Niccolo Brooker and others

Posted by Richard Perry at 5:37 PM