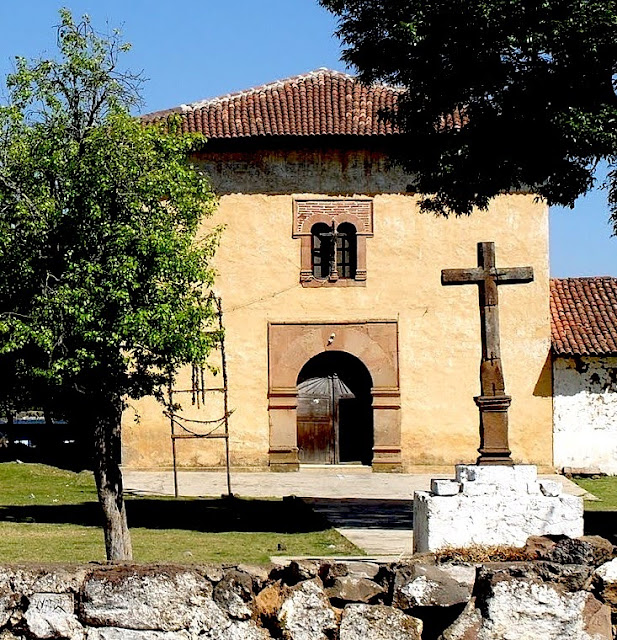 Located off the main highway between Uruapan and Pátzcuaro, the remodeled parish church of Santa Maria de la Asunción Huiramángaro dates back to the 16th century.
The unassuming, square facade features a plain, cut stone doorway with wide jambs and voussoirs framed by an alfiz—a mudéjar detail typical of many early Franciscan houses.
A divided ajimez choir window in the distinctive Michoacan style opens overhead, also with an alfiz.
And like San Nicolás del Obispo, Huiramangaro has a separate, multi tiered bell tower, although of recent construction. 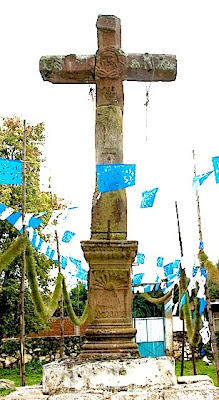 An octagonal stone cross, irregularly reassembled of contrasting stone sections, still stands in front of the church.
Its upper part is cut from soft brownstone and is emblazoned with Passion symbols, most notably a boldly detailed Face of Christ at the axis, prominently ringed by a pretzel like Crown of Thorns. 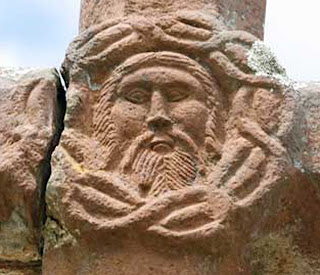 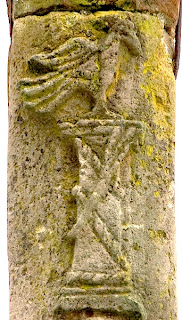 Bleeding Wound reliefs with deep center cavities protrude from the arms and the foot of the main shaft, and a Cockerel atop a swagged Column appears on the mid shaft of lighter colored limestone. The reverse side is plain, but the square pedestal of the cross is dated 1655, and an eroded INRI plaque slants across the head of the cross.


The remodeled interior retains its original coffered, moorish arrocabe, carved and painted with sunbursts and angels, which surrounds the nave below the paneled ceiling. 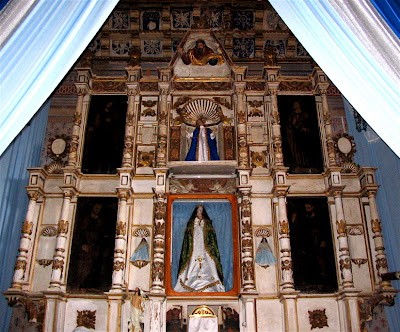 An elegant neo Plateresque retablo stands behind the main altar inside the church. Slender baluster columns support its two main tiers, framing figures of the Virgin and a selection of dim tenebrista paintings. A fine relief of El Padre Eterno is mounted at the top. 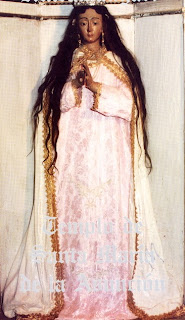 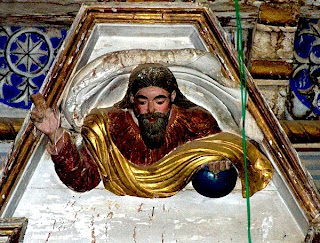 An exquisite statue of The Queen of Heaven, fashioned of maguey and pasta de caña, occupies the center niche. This expressive, dusky image, known locally as La Huanancha—The Virgin of the Sun—may have belonged to the old hospital chapel. 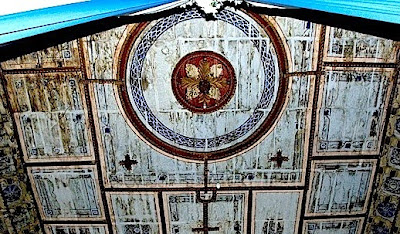 An ornamental center medallion, or Gloria, is adorned with foliated reliefs and pineapple pendants.
The original painted ceiling may date from an earlier remodeling undertaken between 1733 and 1745. Simple floral bands of a late date now adorn it, but fragments of earlier painted figures have recently been found beneath layers of whitewash. 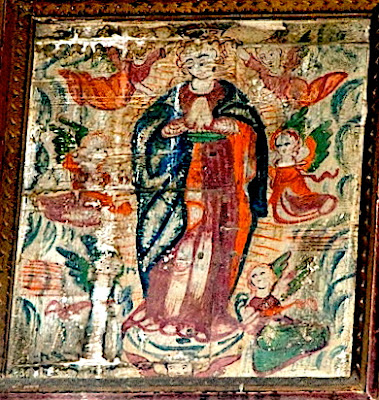 No narrative murals have survived apart from a painted panel of The Assumption of the Virgin, now mounted above the sanctuary arcade. 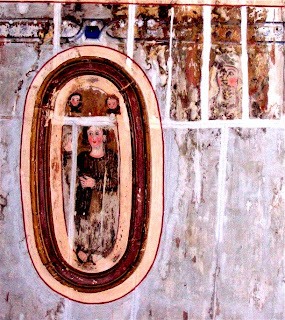 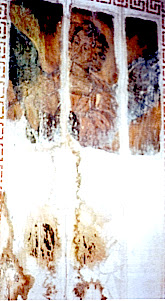 There is evidence that the original ceiling was higher than at present, as colorful friezes have been found on the hidden beams above.
Vestiges of figural murals have also emerged beneath the choir and behind the main retablo. Known locally as the Dance of the Apaches, these appear to represent winged angels, some playing musical instruments—a feature of many churches and chapels in the region.