The Painted Chapel
As at Zacán, a renovated tiled belfry/gatehouse admits the visitor to the guatápera precinct at San Lorenzo. An arcaded community building adjoins the entry and faces the chapel across a wide courtyard. 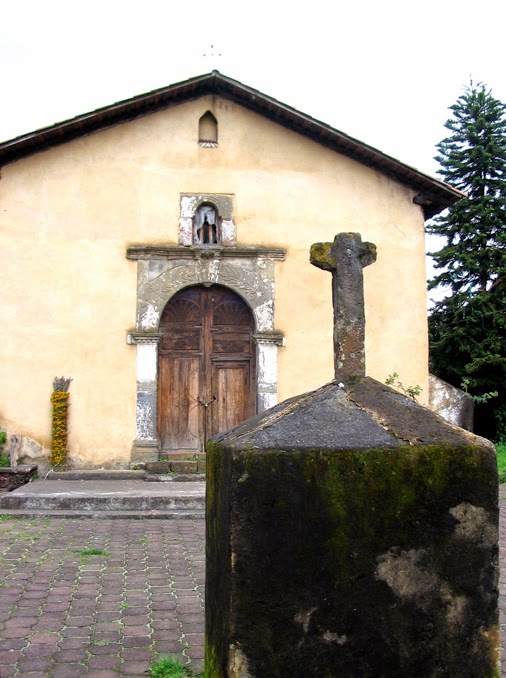 The simple, whitewashed chapel front features an elongated doorframe of later colonial vintage, incised with foliage.
Like most guatápera chapels it is dedicated to the Virgin of the Immaculate Conception and at its apex an irregular niche houses a tiny figure of Mary (currently missing).
The Chapel Ceiling
In contrast to the unadorned roof of the main church, a brightly colored artesonado ceiling spans much of the beamed chapel interior.
Constructed as an inverted trough, or truncated pyramid, the ceiling is supported on wooden pilasters and is divided into 11 elongated tripartite panels that span the nave, ending in a fan above the main altar of 8 triangular and trapezoidal slices. 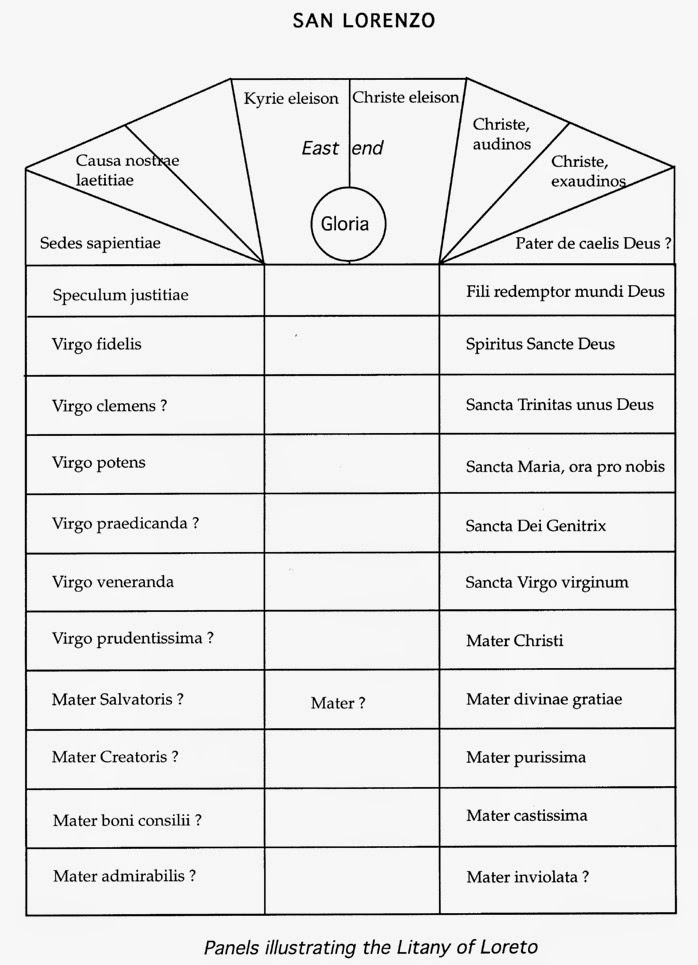 While the flat upper panels along the nave are mostly decorated with hearts or sunbursts with floral borders, the narrative scenes along the sloping side panels illustrate the verses of the Litany of the Virgin in folkloric style.
Although the sequence is incomplete and inconsistent, the verses are in Latin and are derived from the engravings contained in an 18th century European guide to the Litany.

Despite its relatively small scale and uneven condition, this ceiling remains one of the most extensive and complex in Michoacán, and awaits timely restoration.
Rendered in a colorful palette of red, blue, yellow and diverse earth tones, the illustrated Litany here, like others in the region, is accompanied by a wealth of anecdotal detail, ornamental foliage and other decorative devices.
Here are some selected panels and details: 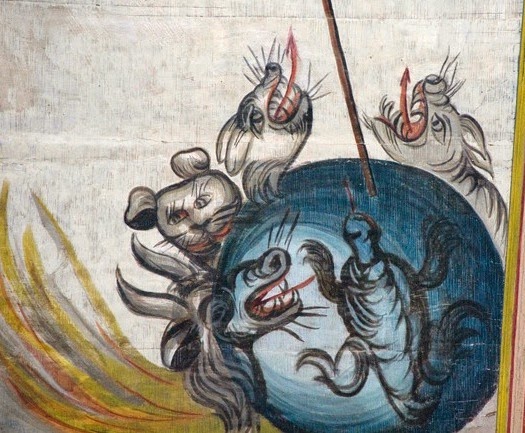 images of hell with demons and turtles (Carolyn Brown)

Several of the religious images on the main altar may be colonial in origin, including the portable statues of the La Purísima and the saints Martha and Mary Magdalene, all luxuriantly costumed and beaded.
A finely worked colonial statue of the Archangel Raphael rests in the principal niche.
text © 2014 Richard D. Perry.
color images by the author and courtesy of Niccolò Brooker and Carolyn Brown
Posted by Richard Perry at 8:35 AM