Missions of Michoacán. Zacán: the Chapel

Zacán: The Rosary Chapel
A unique feature of the colonial mission town in Michoacán that set it apart from those elsewhere in Mexico was its enclosed community center or guatápera.  Located at the heart of the pueblo-hospital, as these mission towns were known, this compound was an institution that grew out of communal prehispanic custom and usually comprised an infirmary or traveler’s hospice, a community house and a chapel.
The main focus of each guatápera was its chapel, commonly called a yurishio after the traditional women's houses that formed part of these ancient settlements before the arrival of the Spaniards.
Later these guatáperas were adapted by Franciscan and Augustinian missionaries to serve the native people of the region, formerly known as Tarascans and more recently the purépecha.
Envisioned as self sustaining "missions within missions,” the compounds were attached to but separate from the friars' churches and conventos, and were built and maintained by indigenous cofradías, or religious brotherhoods.
Appropriately, in view of their earlier association, most chapels were dedicated to the Virgin Mary, commonly portrayed as La Purísima or the Virgin of the Immaculate Conception, and were the main focus of indigenous ceremonial activity.
Many of these chapels, although plain on the exterior, were lavishly furnished inside, with decorative retablos and painted wooden ceilings.
The spectacular chapel ceiling at Zacán is one of the finest and the most fully restored in the region.
The chapel of St. Rose of Lima, or the Rosary Chapel as it is locally called in Zacán, stands across the road from the main church inside the high, walled guatápera and is entered through a sturdy masonry gateway with an interior belfry (recently restored).

Elements of the original guatápera buildings remain at Zacán; besides the chapel itself, there is a stone colonnade and a pair of intricately carved, moorish style, or mudéjar, window frames similar to those we saw at Uruapan.
Behind the chapel front, plain save for its carved choir window, a steeply pitched, suspended ceiling overhangs the center nave, supported on tall, painted, wooden posts.
All the panels are painted in vivid colors—reds, blues, green, yellow in addition to a range of more subdued earth colors.
Recently restored under the auspices of the conservation group Adopte una Obra de Arte, this is one of the later painted ceilings of Michoacán—dated 1857 by an inscription on a cross beam.
Significantly, this date closely follows papal promulgation of the dogma of Immaculate Conception of the Virgin, in 1854, and coincides with enactment of the anticlerical Reform Laws in Mexico. In this way, the painting of the ceiling might be seen as a reaffirmation on the part of the priest and the native congregation of their Catholic beliefs, as well as a desire to seek the protection of the Virgin Mary in a stressful period.
The Iconography
Painted narrative panels are confined to the hexagonal center section.  Among the most ordered and readable of the Michoacan ceiling murals, the elongated sloping panels depict the virtues of the Virgin Mary as praised in the traditional Litany of Loreto. (Both text and illustrations are broadly based on a Spanish version of this popular devotional, published by the 18th century Jesuit Francis Xavier Dornn and illustrated by the Klauber brothers in Augsburg, Germany.)
The Zacan illustrations are highly simplified, colored versions of the original monochrome engravings, with many folkloric touches added. As with other Marian ceilings, the Virgin is shown in her blue robe, supported on clouds and in most cases framed by decorative borders.
The sloping narrative panels proceed or less in the traditional order of the Litany, starting behind the main altar, encircling the entire nave and returning to the apse (see plan).
Devoted to single verses in the divisions nearest the main altar, they double up in the bays towards the choir end, presumably to accommodate more of the Litany, although some are misplaced and the last half dozen are missing. In some cases the wording has also been altered or simplified, either by misreading or in an attempt to accommodate local usage for ease of comprehension.
Ornamental, red and blue panels fill the flat center ceiling at the far end but are taken over by the narrative images towards the choir. The murals teem with picturesque incidental details, including dragon like devils and the signs of the zodiac. 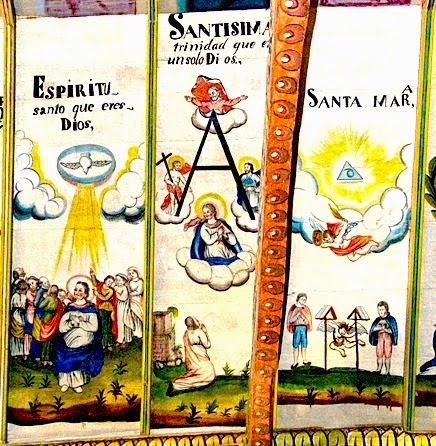 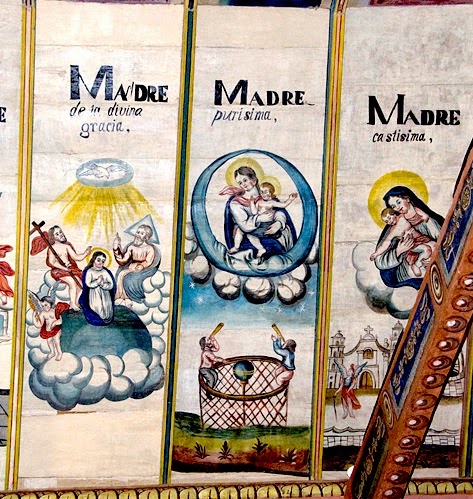 Aside from images of Christ and the Virgin, other saints portrayed include the figures of the Archangels Michael and Gabriel, King David with his harp and even David holding the head of Goliath! 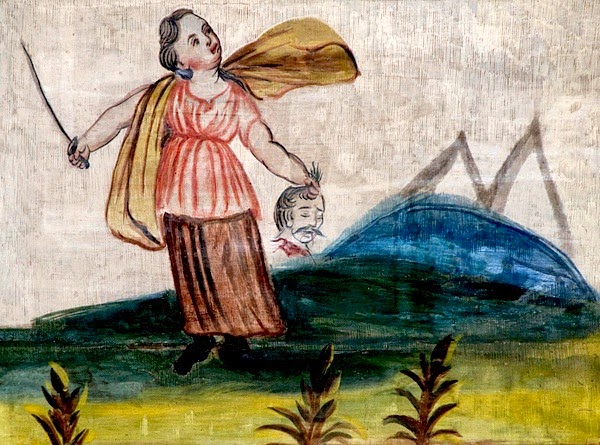 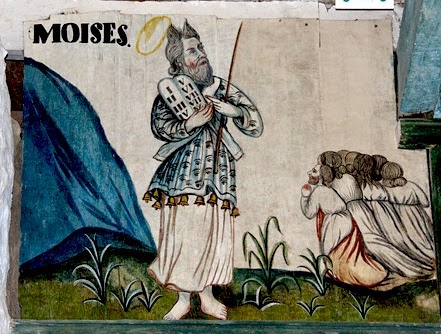 Separate from the ceiling, two vertical panels on either side of the elevated choir portray the Old Testament figures of Moses and the prophet Joshua—both considered avatars of Christ.
Moses clasps the Commandments to his bosom while Joshua, dressed as a Roman soldier, directs the Battle of Jericho.  Trumpets sound in the latter, and bells adorn Moses’ robe—illustrating again the importance of music in the liturgy and the depiction of biblical figures here in Michoacán. 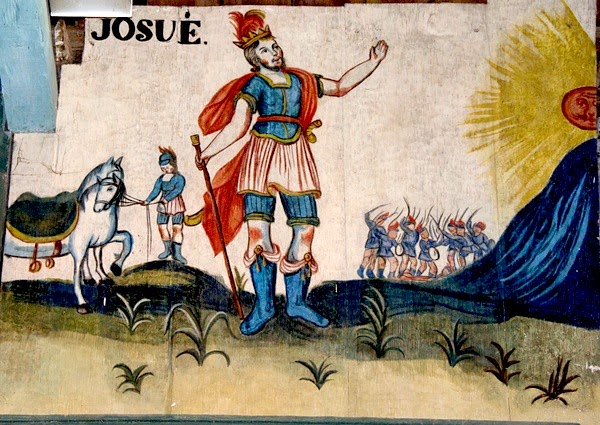