Quinceo boasts what may be the largest and most complete painted ceiling in Michoacán, although almost certainly one of the least well known and so far unrestored.
Although dated by a single, scrawled inscription to the late 1800s, much of the ceiling ornament may in fact be much earlier.

It takes the form of a low, rounded vault, with fan like avenerado (shell) sections at either end above the choir and apse. The ceiling is divided into thirty arched, painted panels spanning the nave.
These fall into two sections: slender panels along the western two thirds of the nave, and wider panels towards the apsidal end.
The Litany
As at neighboring Zacán and San Lorenzo, the Litany of the Virgin of Loreto is the principal subject of the crowded eastern panels—the text here reproduced in Latin rather than Spanish. 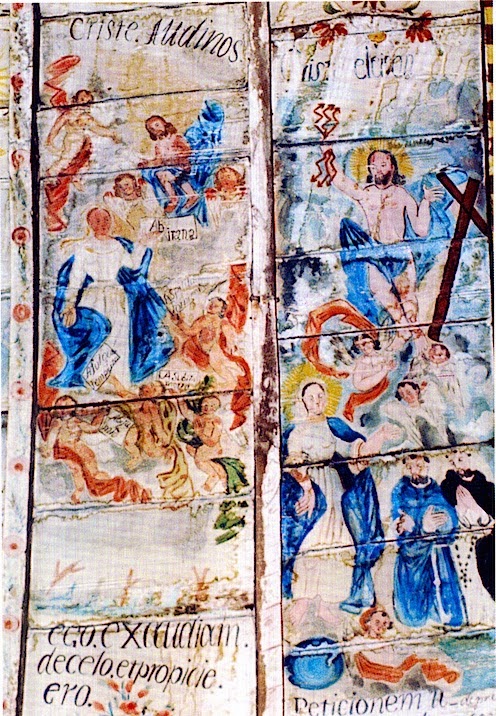 The invocatory titles and accompanying illustrations alike are taken from the widely known 18th century Klauber edition of the Litany, and here include its additional biblical verses—the only such complete example among the Michoacán ceilings or in any Mexican pictorial context to our knowledge, this despite the fact that several of the original invocations are missing or have been effaced and some of the scriptural references are shortened or incomplete. 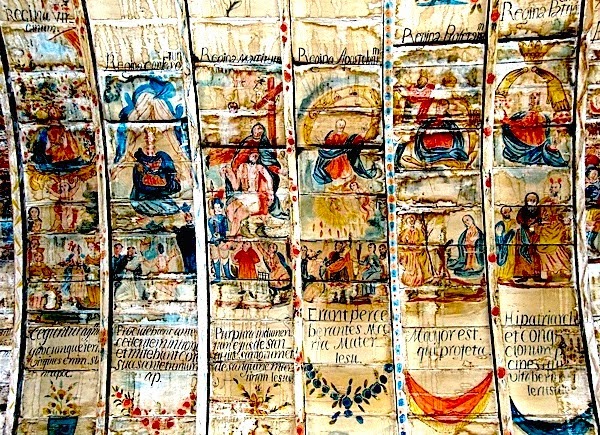 The sloping lateral panels are crowded with portraits of the blue robed Virgin in various attitudes, with the accompanying cursive texts and biblical figures, and set in a variety of rustic landscapes, often with buildings, ships, etc., loosely based on the original illustrations from the Litany. 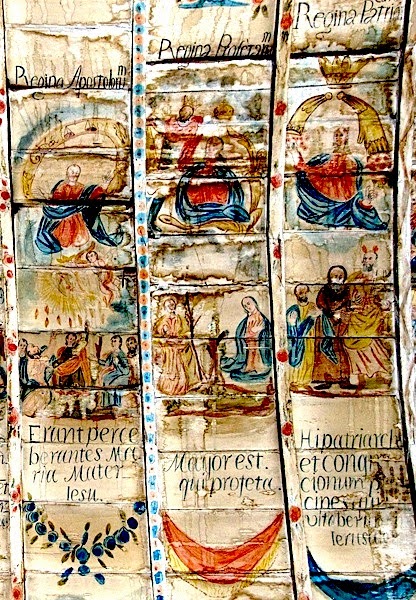 All are profusely ornamented with floral sprays, swags and urns in a spontaneous and colorful folksy style. A sequence of varied, red and blue sunburst motifs unfolds at the apex of the ceiling. 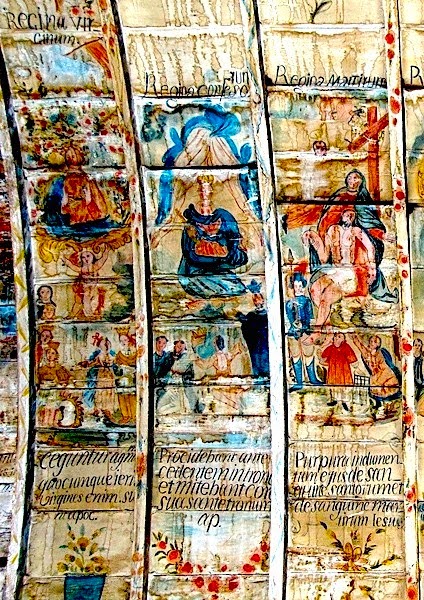 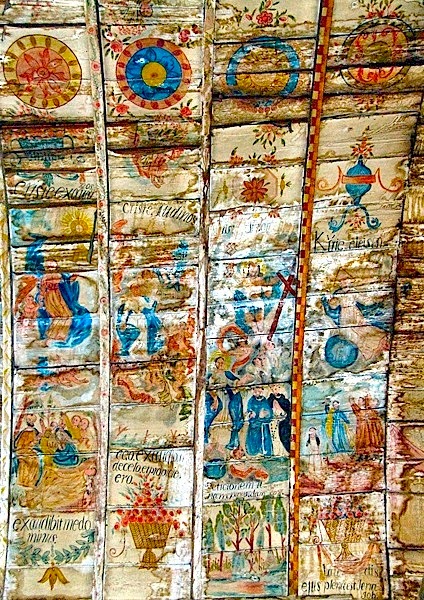 Loosely composed, but rendered in a broad and luminous range of red, blue, yellow and green, these folkloric painted panels are clearly the work of indigenous artists. They are strikingly similar in style to those at San Lorenzo and may well be by the same artist or artists.

The Apostles
The eight broader panels towards the west end are more sparely ornamented and devoted to portraits of the Apostles—St. James Major (Santiago); St. James Minor; St. Philip; St John the Evangelist; St. Matthew; St. Peter; St. Andrew; St. Simon—each inscribed with the saint’s name and showing his attributes.
Portraits of the Apostles in sequence, or apostolados, are a prominent feature in many of the painted ceilings of Michoacán, especially among the smaller chapels such as Corupo, Charapan, Zapateros, Uruapan and Santa Clara del Cobre, as we shall see.

An image of Mary Magdalene, the patron saint, dominates the apsidal fan, while the Archangel Michael stands guard above the choir at the west end.
Although often exhibiting uneven composition and awkward lettering, and having suffered much from extensive water damage as well as some later retouching, these murals nevertheless retain much of their freshness and color—classic examples of popular religious folk art in the Michoacán tradition.
It is hoped that resources can soon be found to protect and restore this rare ceiling before it decays further.
The Gloria
Another extraordinary feature of the ceiling is the large sunburst, or Gloria, with hinged golden rays affixed to the ceiling above the main altar.
It is reinforced and fitted with pulleys by which the “ascension” of an image of Christ of the Virgin through the “Gate of Heaven” is dramatized during the Easter ceremonies.


Text © 2014 Richard D. Perry.    Photography ©Niccolò Brooker except where noted
based in part on Los Artesanos michoacanos... by Gloria Angélica Álvarez Rodríguez
All rights reserved
English version of the Litany
Posted by Richard Perry at 2:13 PM