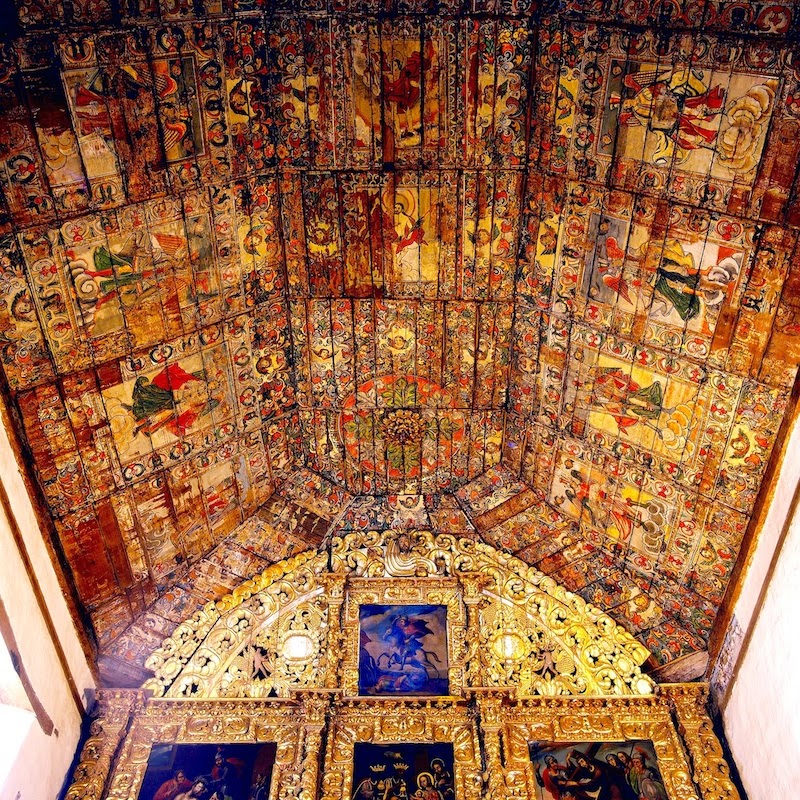 Tupátaro: the Ceiling
Aside from the gilded main altarpiece (see previous post) the principal treasure at Santiago Tupátaro is its painted ceiling, the best known, one of the earliest and perhaps the most spectacular of the Michoacán polychrome ceilings—a work of art that has been called with little exaggeration the "Sistine Chapel of the Americas."
Dated 1772 by an inscription on a crossbeam, the trapezoidal ceiling is suspended above the long nave. Painstakingly restored by the late artist Enrique Luft in the 1970s and again by INAH in the 1990s, the ceiling comprises 47 panels* painted in a luminous palette of reds, greens, blues and earth tones.
Compounding its grand scale, vivid color, graphic power and excellent state of preservation, the Tupátaro ceiling is considered one of the most coherent, both visually and iconographically, in the region. 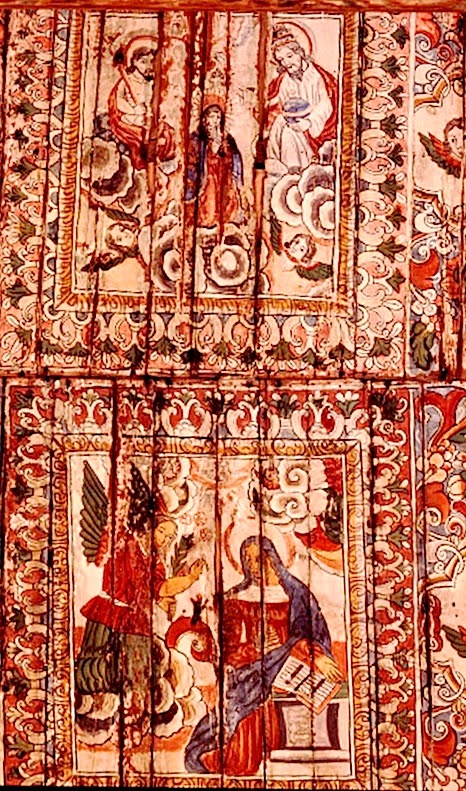 The sloping lateral sections display an extended sequence of splendidly costumed archangels with plumed headdresses. Known as ángeles pasionarios, each one bears one of the traditional symbols associated with Christ’s Passion.

Above the choir, two angels carry censers, and a charming smaller panel portrays St. Cecilia playing a pipe organ, underscoring the important role of music in the colonial liturgy.
All the panels are brilliantly framed with decorative clouds, cherubs, flowers, indigenous plants and fruits amid a profusion of ornamental baroque scrolls.
Created by an unknown local artist(s), this dazzling display of art in a humble rural chapel was designed to visually instruct and impress a congregation of largely illiterate villagers and pilgrims.
This ceiling testifies not only to the power of religious devotion in this remote corner of colonial Michoacán, but to the creative imagination that gave it such eloquent expression.


Text © 2014 Richard D. Perry.
Photography by the author and courtesy of Carolyn Brown and Niccolò Brooker

Note: much of the text and many of the images in this series of posts are taken from material accompanying related photographic exhibits by Carolyn Brown under the titles A Joyful Noise and Heavens Above: the Painted Ceilings of Michoacán
Posted by Richard Perry at 12:48 PM