In February 1943 the new volcano Paricutin burst forth from the earth, engulfing the town of San Juan Parangaricutiro—also known by its quaint colonial name of St. John of the Bedspreads—in a black tide of lava.
The townspeople hastily abandoned the settlement, pausing only to retrieve the crucifix that stood before the main altar of the parish church.
Fleeing to nearby Angahuan, the weary refugees celebrated Mass before the church door to give thanks for their deliverance and that of their beloved Cristo de los Milagros. Today, the santo is installed in the church of a new settlement, Nuevo San Juan Parangaricutiro, located west of Angahuan.
Although originally founded by the Franciscans in the 1530s, the church we see today at Parangaricutiro dates from the mid-1600s, built by the Augustinians to house the miracle working crucifix of El Señor de Los Milagros, an image which attracted adherents and pilgrims from across Mexico. Construction nevertheless proceeded slowly over the century and even beyond, remaining unfinished even at the time of the eruption—the south tower (torre mocha) was never completed.
In fact, the Sanctuary of Our Lord of the Miracles (El Santuario de San Juan) presents architectural features unlike any other church in the state of Michoacán.  In the first place the scale of this pilgrimage church is enormous for the relative size and remoteness of the community, both in its length and design.

Then there is its architectural boldness. Built of warm, pinkish gray cantera quarry stone, the Santuario is designed in classic basilican style with a lofty, extended nave divided by arcades from side aisles with their own entrances.
Today the shell of the church remains buried in lava; only its upper walls and front visible.
The church facade is framed in classical style with three bold but plain arched entries in basilican fashion, flanked by paired Doric columns in the center—a pattern repeated on the upper level.
A classical frieze with alternating triglyphs and ornamental oval reliefs divides the two tiers of the facade, and is repeated above.
A still intact broken triangular pediment with prominent dentils crowns the center section.

Triple tier towers anchor the front, of which only the northern one was completed. Although detailed like the facade, jutting cornices at each stage, supported by freestanding Doric columns on the corners, lend a more baroque feeling. 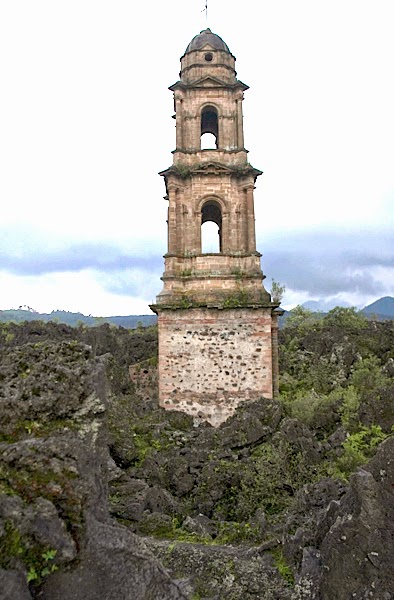 Again, Doric friezes and triangular pediments cap the arched openings of the two main tiers and a dome surmounts the shortened top tier.
Behind its broad front, rows of Corinthian columns once divided the nave from the side aisles, now infilled, which were also flanked by blind arcading in similar style.
Upper windows lit the long nave, illuminating the lavishly decorated, flat plaster ceiling, now also gone, that led the eye to the imposing main altar of masonry, built like a Roman temple in two tiers.
Today only accessible section of the church is its apse, where the colonnaded upper part of the altar which retains its striking fluted Corinthian columns, is still in use for local devotions.
text © 2015 Richard D. Perry.  color images by Niccolò Brooker
Posted by Richard Perry at 9:33 AM