Before leaving Chiapas, we take a last look at the venerable priory of Santo Domingo de Tecpatán, the major Dominican house in the northern Zoque region of the state.
The rain stained hulk of this grand, 16th century priory still broods over its grassy atrium in the center of this tropical hillside town,

Imposing and original, the 16th century building complex draws on the diverse architectural traditions favored by the Dominicans—late medieval, mudéjar, Plateresque and Renaissance.
While the brick and stone church front has lost much of its stucco veneer and original detail, its harmonious and inventive design continues to impress.  Giant Tuscan pilasters frame the entire center facade—plain, apart from shallow shell niches embedded at eye level.
The simple arched doorway retains only vestiges of its fluted surround. Three blank sculpture niches separate the doorway from the handsome, layered choir window above, in turn flanked by worn Corinthian pilasters. capped by dentilled cornices.
A shallow triangular pediment caps the center facade. The crumbling espadaña—a picturesque silhouette of looping arches capped with eroded baroque pediments and finials—is a later addition

The canyon-like interior of the church, now open to the sky, was originally spanned by a pitched artesonado roof supported on masonry arches, some of which still rest precariously in place. At the east end, a short flight of steps leads up to the narrow apse, which is framed by a classical archway and vaulted by a scalloped half dome. Typically Dominican, rounded, recessed windows open at intervals along the roofless nave. 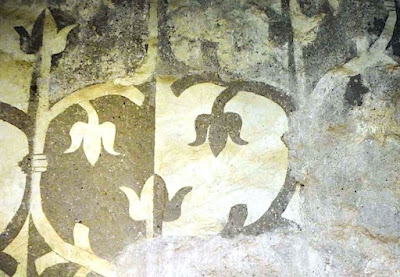 The cavernous sacristy beside the apse is roofed by a lofty Gothic vault in a ribbed cloverleaf pattern, still bearing traces of floral mural decoration.
Broad pilasters topped with plateresque finials frame the grand south porch, its "door-within-a-door" design related to the north entry at Yanhuitlan—the great Dominican priory in Oaxaca. The Dominican insignia are emblazoned on a crumbling stucco panel above. 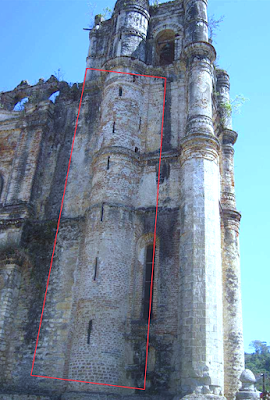 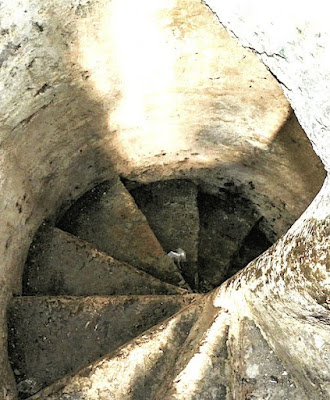 tower image by Ana María Parrilla Albuerne;  stairway © 2016 Robert Jackson
The fantastical, turreted tower is the most striking feature of this church, conjuring up the image of a medieval castle. Cylindrical and octagonal buttresses brace the corners, while the semi circular projection from the west face encloses a narrow, winding stairway of cut stone, illuminated by slit openings.
The recently restored cloister at Tecpatán, a grandiose two-story structure, is distinguished by elegant arcades of burnt-orange brick.
The renovated walkways are covered by lofty groin vaults and faced by arcades with paneled piers, further adorned along the upper arcade by plain and spiral colonnettes.
Altogether a magnificent but timeworn monument to faded Dominican hopes and missionary efforts among the Zoques.