This post initiates our series on the magnificent Dominican priory of  Santo Domingo Yanhuitlan, in the Mixteca Alta region of Oaxaca. The founding, subsequent building and furnishing of the church and convento, and their maintenance was a collaborative enterprise between the Dominicans, the local Spanish officials and the native Mixtec elite of Yanhuitlan.
Our focus will be on the imposing architecture as well as the rich variety of colonial works of art housed within its walls. We look first at the imposing exterior of the venerable church.

Isolated atop a pre hispanic temple platform, Yanhuitlan was singled out by art historian John McAndrew as “the handsomest sixteenth century church in Mexico.”
The choice of a former temple site for the monastery served to dramatize the triumph of the Christian religion and, not incidentally, take advantage of existing foundations and building stone.
As might be expected in a building that took almost a century to complete, the architecture of the monastery is a fascinating stylistic mix of elements shared by other Dominican houses in Oaxaca. The main influence is that of the Spanish Plateresque, a fusion of Renaissance forms with late Gothic and Moorish elements, leavened here with baroque additions. 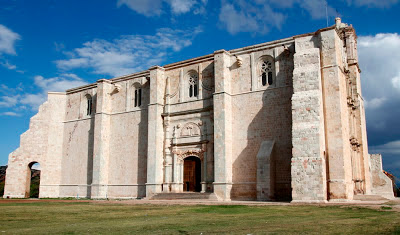 The formidable exterior has the look of a medieval citadel, fortified against the ever present risk of earthquake. Stepped, pierced buttresses brace the rugged walls and the great rounded apse.

Arched windows with Gothic tracery are cut into the lofty nave, which is covered by handsome ribbed vaults. The mercurial stonework seems to change color with the weather and the time of day: sometimes chocolate brown or pinkish white, at other times greenish gold.
The West Front
The sober baroque facade we see today is not the original one. It was superimposed on an earlier Plateresque front, probably after an earthquake in the early 1600s.
In fact, remnants of the original facade including its coffered diamante doorframe are still in place, masked by the present one; two arched upper openings, similar to those of the unfinished west facade at Cuilapan—another grand Oaxacan priory—are now visible from the choir. 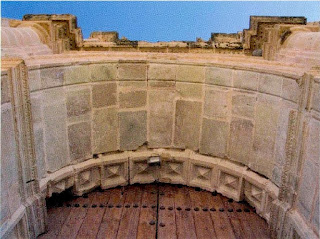 The present "retablo" style facade follows the pattern established by the west front of Santo Domingo de Oaxaca. Confined between plain tower bases, its three tiers are cleanly outlined by classical orders of columns and pilasters. In each tier, the center section is emphasized, flanked by sculpture niches in the outer compartments.

A diamond paneled arch with fleurs-de-lis outlines the main doorway, its ornate shell like keystone carved with a book symbolizing the Gospel. Dominican dogs with curly ears and tails hold up torches on the pedestals of the flanking Tuscan columns, and statues of St. Francis and St. Catherine of Siena occupy the lower niches. Intervening spaces are carved with shells and intricate scrolls and tendrils in a popular style, reminiscent of those adorning Oaxaca Cathedral—another replaced facade.

Above the doorway, a boldly carved relief in a cruciform frame depicts the Virgin of Mercy with the Christ Child sheltering St. Dominic and St. Catherine beneath her ample cloak. Chubby cherubs add to its naive charm. The upper facade terminates in an ornate, curved pediment—an 18th century addition, as is the recently strengthened bell tower.

The North Doorway
Now handsomely restored, the elegant north portal is the most sophisticated Plateresque facade in Oaxaca, closely related to the unfinished north doorway at Cuilapan. Although conceived on a grander scale, it may well be the work of the same designer, the Portuguese sculptor Antonio de Barbosa.
The design skilfully manipulates the door-within-a-door motif. Giant candelabra columns, with bulbous, urn-like sections piled one upon another and headed by rosette-studded capitals, frame the portal and continue above the upper cornice to embrace the Gothic tracery of the nave window.

The inner doorway echoes the outer pattern. Fluted Corinthian columns rise on either side, while rows of coffered panels radiate around its basket handle arch—a classic Dominican motif. The scalloped pediment above is also flanked by candelabra pinnacles.
Although the medallions in the spandrels are blank—probably intended to bear the Dominican cross—the escutcheons beside the pediment are intricately carved with armorial plumed helmets, possibly the crest of the Las Casas family—the encomenderos of Yanhuitlan.

text and drawings © Richard D. Perry.
Photography by the author, Felipe Falcón and others
For more on Yanhuitlan, Cuilapan and the arts of colonial Oaxaca order our guidebook

Posted by Richard Perry at 5:14 PM