In an earlier post we described the altarpieces inside the church. Here we consider some of its other treasures: 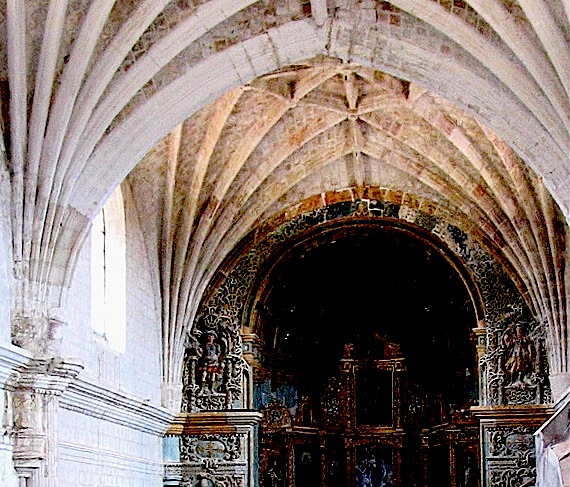 The dimensions of the Yanhuitlan nave are audacious for earthquake country—over 200 feet long, almost 60 feet wide, and a breathtaking 100 feet in height.
Majestic Gothic vaults cover the three main bays of the nave and the choir, reinforced by clusters of ribs which spring from huge drum corbels embedded in a layered running cornice that encircles the nave.

A vast raised choir dominates the west end of the church. Beneath the choir is an exquisitely crafted alfarje, or wooden artesonado ceiling. Recently restored, it is one of a handful of surviving 16th century examples in Mexico.
Carved entirely of cedar, the complex mudéjar pattern is composed of alternating hexagonal and diamond-shaped modules, or casetones. Each recessed module is built up from richly carved and painted moldings, creating a densely textured tapestry.
A pendant carved in the form of a delicate rosette hangs from the center of each hexagon.

The baptistry is also rib-vaulted and contains a monolithic font of striking design.
While its stone basin is conventionally carved with foliage and Dominican rosettes, it stands on a fluted shaft supported by four corner legs in the form of plumed serpents devouring each other—a pre-hispanic motif referring to the four cardinal directions. 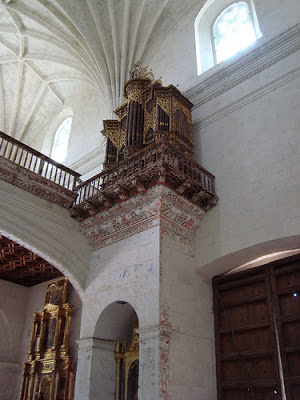 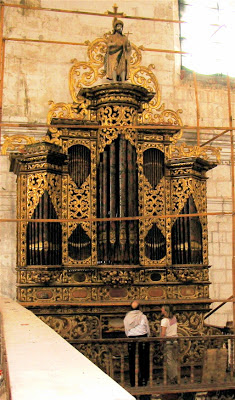 A magnificent baroque organ stands on a giant pillar beside the choir. This ornate 18th century instrument has recently been restored to playable condition and during recitals, the church is filled with music not heard here for over 200 years. 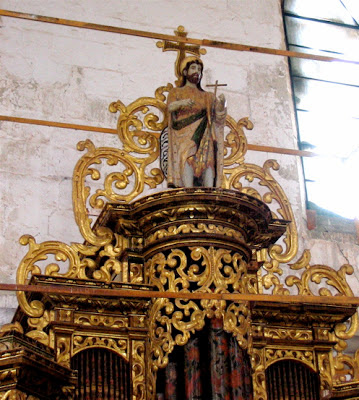 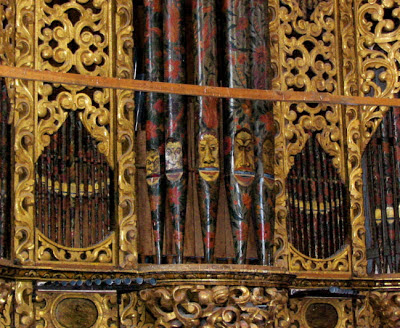 text and images © Richard D. Perry, except where noted

for more on Yanhuitlan and the colonial churches of Oaxaca, consult our illustrated guide book
Posted by Richard Perry at 10:55 PM