We journey south beyond the city of Oaxaca to the remote Zapotec village of Ozolotepec in the rugged Sierra Sur of Oaxaca.
At the heart of the community stands the 17th century church of Santa Maria Ozolotepec. 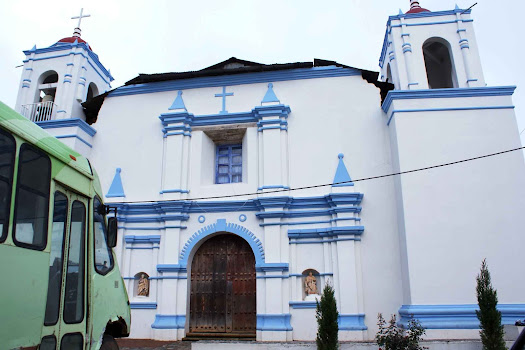 The broad, much rebuilt church front presents a modified retablo facade flanked by stubby single tier bell towers. Statues of Sts Peter and Paul occupy niches on either side of the arched west doorway. 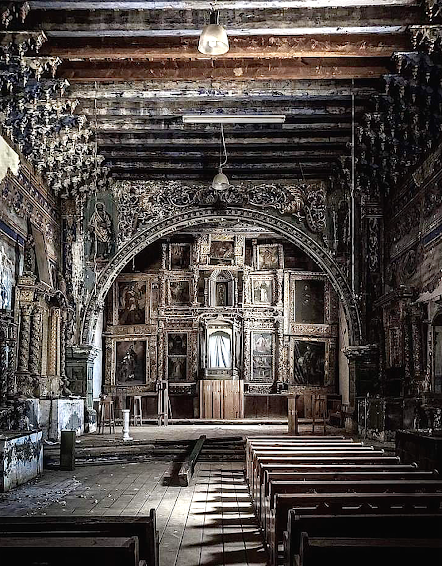 Ozolotepec. The nave after the 2017 earthquake.
Inside, the expansive single nave is covered by a spectacular, painted, beamed ceiling hung with spindles. Several baroque altarpieces line the nave, most notably the main retablo and the side altarpiece of St Antony. 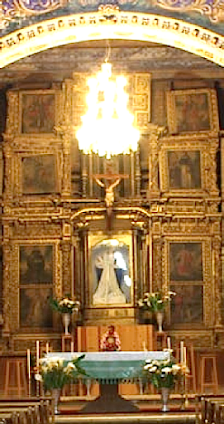 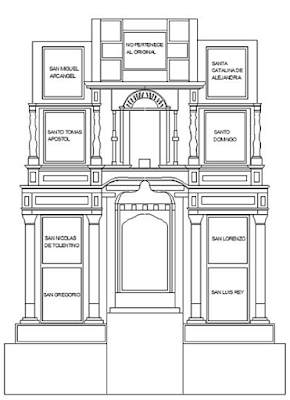 The retablo mayor
The Main Retablo
Bankrolled, like the church as a whole, by the eminent cleric Pedro de Otálora Carbajal, who also funded the building of the famous Sanctuary of La Soledad in the city of Oaxaca, the main altarpiece showcases a number of paintings. These include portraits of  St Dominic, St Lawrence and St Gregory as well as Catherine of Alexandria and the Archangel Michael. 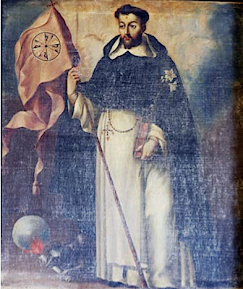 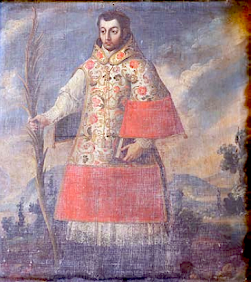 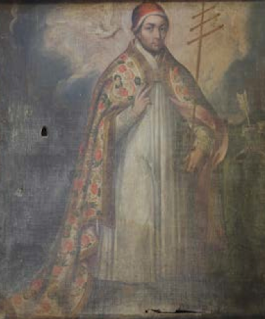 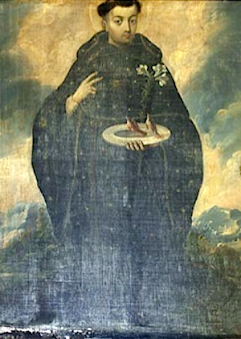 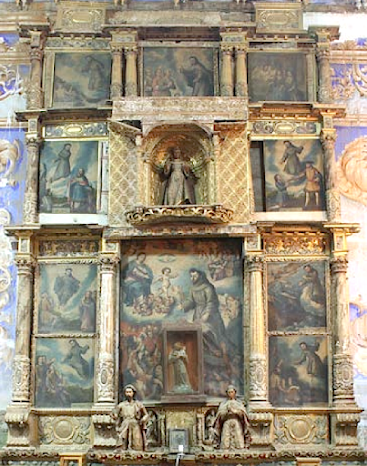 The side retablo of San Antonio is of perhaps greater historical interest. 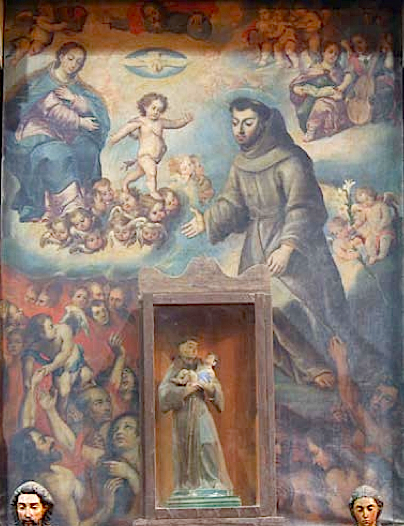 In the center panel, cast in the form of a scene of Purgatory, the commanding figure of St Anthony stands above the struggling souls (animas) , among whom is, on the left, a bearded figure being rescued by an angel, thought to represent the church patron Otálora, and on the right an indigenous man assumed to be a prominent native figure and possible donor of the altarpiece, touching the cord of the saint's robe. 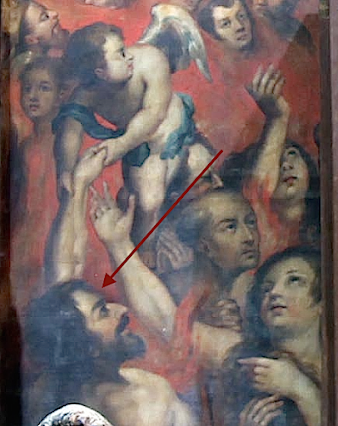 For the last in our current series on the lesser known churches of the city of Oaxaca, we visit La Defensa.
The simple baroque exterior of this little chapel, located close to San Francisco and dedicated to the rarely honored Virgin of La Defensa, is another minor Oaxacan classic. 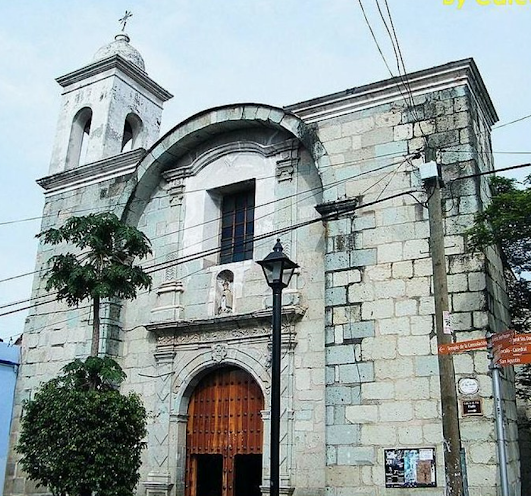 Rebuilt between 1786 and 1792 after an earthquake in 1795, the cruciform church features sober portals, rebuilt more than once following further quakes—west and north facing—with attractive baroque accents. 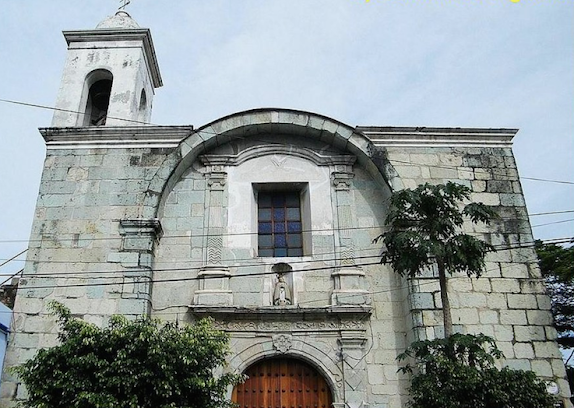 The west facade, faced with local greenstone, is neatly framed by an recessed arch linking the flanking tower bases. A diminutive painted statue of the Virgin occupies a niche above the doorway. 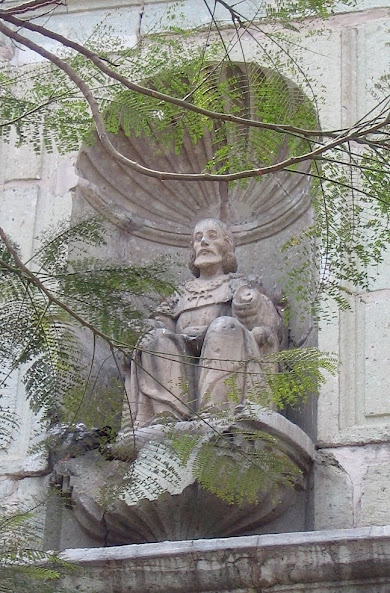 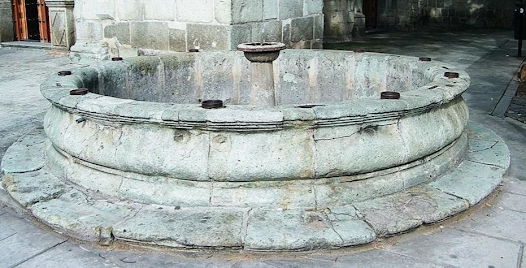 As at Las Nieves, a circular fountain, part of the old city water system, stands in front of the church. 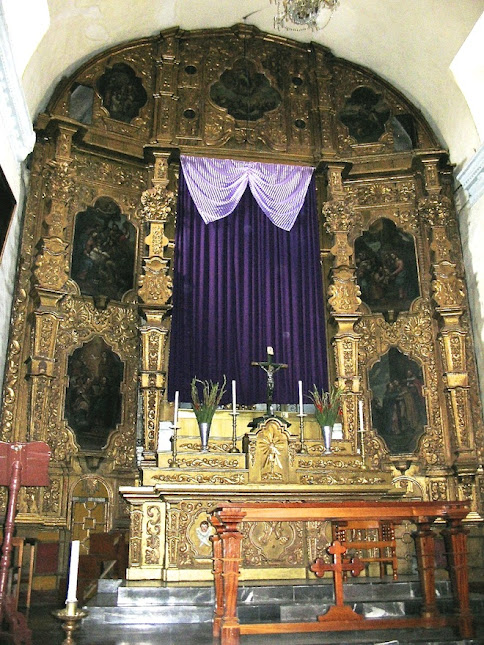 La Defensa is also worth a visit for its Churrigueresque main retablo. As glimpsed from the west entry, the altarpiece radiates a golden glow at the dim far end of the chapel. Two tiers of elongated estípites bracket several dark 18th century paintings portraying the Life of the Virgin, each enclosed by a complex mixtilinear frame. Swirling, shell-like forms fill the intervening spaces and cover the finely worked, gilded altar table in front. In the central niche rests the image of the Virgin known as The Sweet Name of Maria. 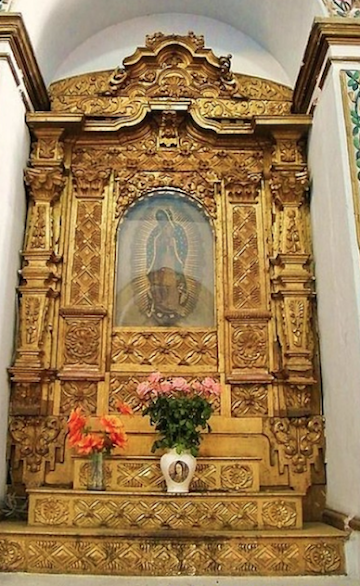 A second gilded altarpiece in similar style, dedicated to the Virgin of Guadalupe, stands in a painted niche along the nave. 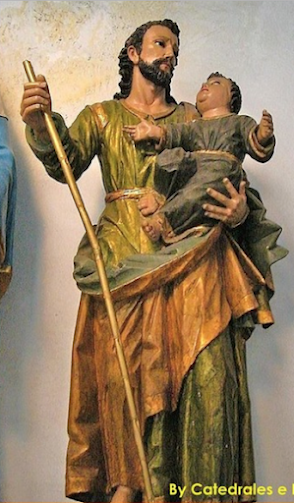 Also of note is another colonial art work, that of St Joseph with the Christ Child
text 2005/2022 Richard D. Perry
pictures by the author and from online sources
* Aficionados may be interested in a beautiful modern house currently for rent in a select suburb of Oaxaca City. For longer term rental only.
Contact the owner at: cwinteroax@gmail.com
Posted by Richard Perry at 1:12 PM No comments:

In another of our posts on lesser known churches in the city of Oaxaca, we turn to the exquisite chapel of Las Nieves.
Originally the chapel attached to the Jesuit seminary of San Juan, this gem of a church is now dedicated to Our Lady of the Snows, the popular patron saint of Rome. Founded in the late 16th century, the church suffered repeated earthquake damage, but was rebuilt in the early 1700s and again in the 1770s, after the Jesuits were expelled from Mexico. 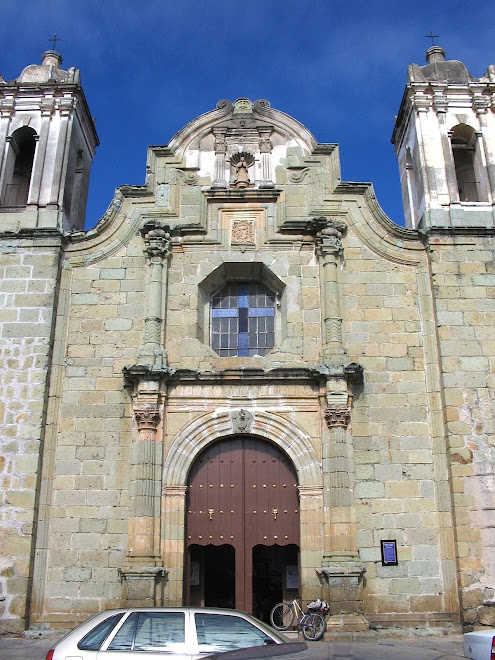 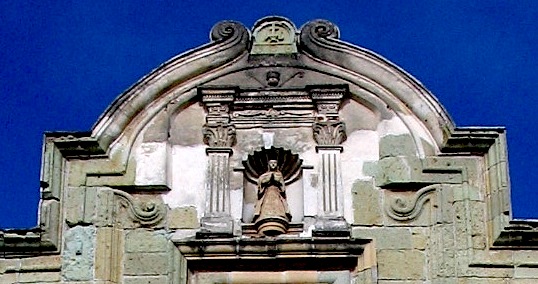 A striking stepped gable crowns the facade, accented by discreet volutes and outlined by a multi-layered cornice.
A monogram of the Virgin with crossed keys is carved in the keystone of the doorway, a reference to the statue of the Virgin of the Nativity housed in the upper shell niche. The monogram of Christ is emblazoned above the choir window. A nice touch is the fluted molding outlining the entire facade.
The Altarpieces
Despite its modest scale, Las Nieves is distinguished by the high quality and variety of its altarpieces. Although the main retablo is designed in the later neoclassical style, the gilded retablos in the transepts and side chapels are refined baroque works, reflecting both the traditional Oaxacan and more cosmopolitan Churrigueresque styles. 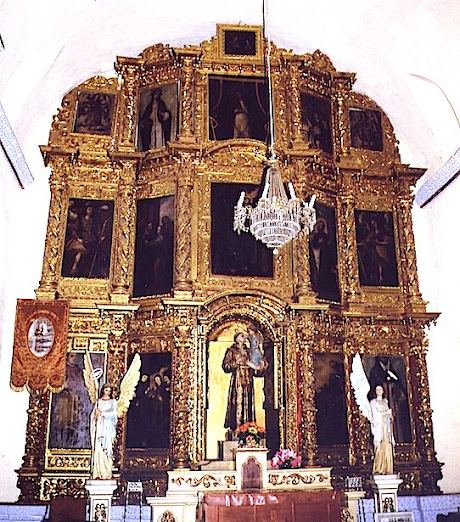 The graceful retablo of St. Anthony of Padua—possibly the former main retablo—is now installed in a side chapel. Its projecting center pavilion features intricate spiral columns of interwoven ornament and sharply projecting capitals hung with spindles. The altarpiece is a showcase for 18th century paintings of archangels and episodes from the life of this popular Franciscan saint. 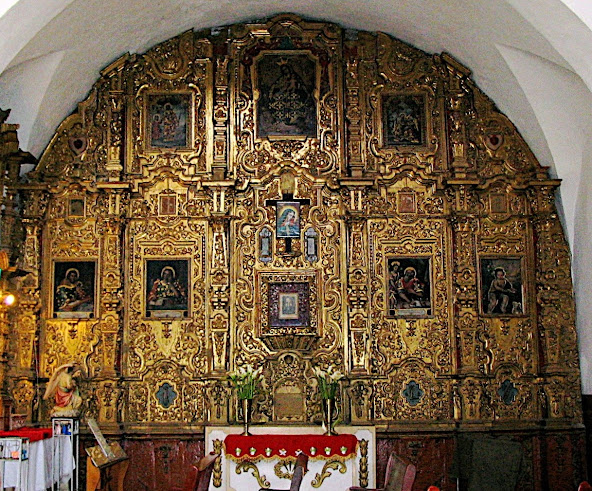 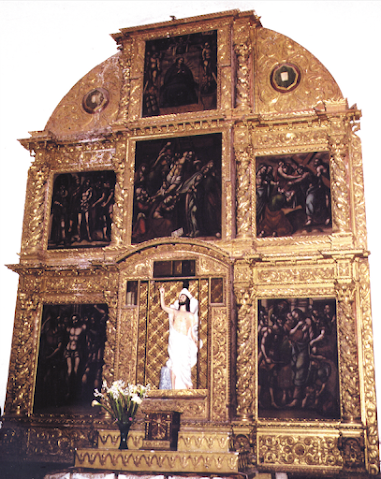 The figure of Christ occupies the retablo opposite, surrounded by muscular paintings of Passion scenes. A simple but affecting statue of St. Anne with the young Virgin also stands in the south transept. 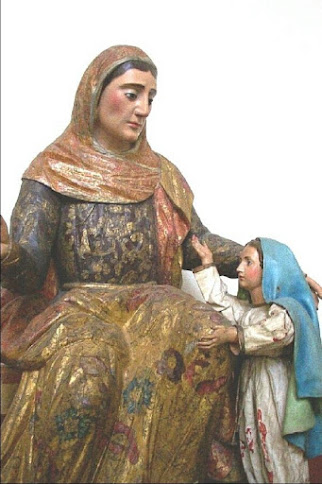 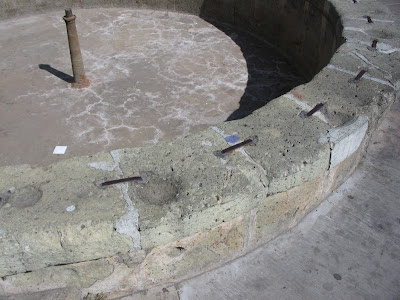 In colonial times, the venerable circular fountain outside the church was the focus of the eastern barrios of the city. Weary water carriers rested their jars in the saucer-like indentations around the rim as they exchanged local news and gossip.
text 2005/2022 Richard D. Perry
pictures by the author and from online sources
* Aficionados may be interested in a beautiful modern house currently for rent in a select suburb of Oaxaca City. For longer term rental only.
Contact the owner at: cwinteroax@gmail.com
Posted by Richard Perry at 4:55 PM No comments: