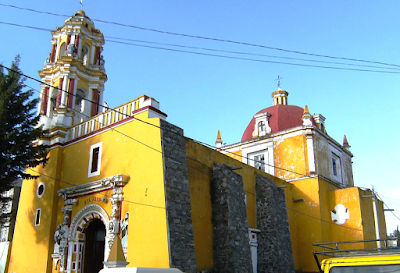 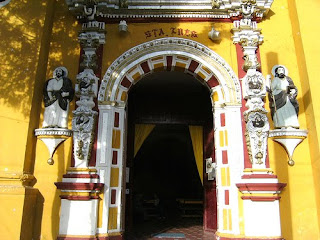 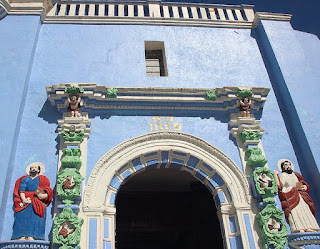 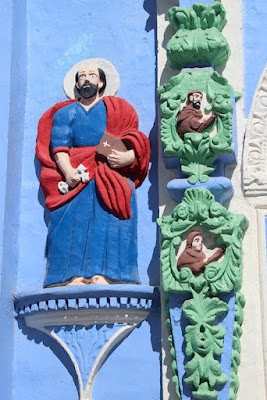 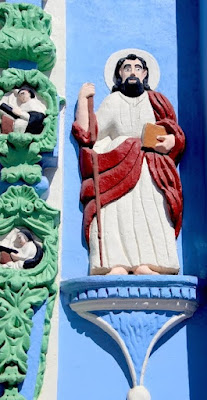 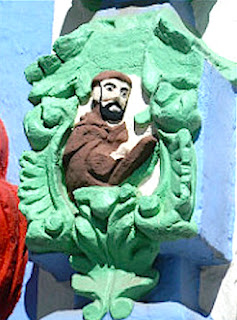 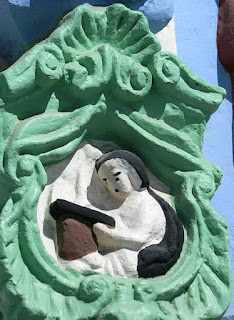 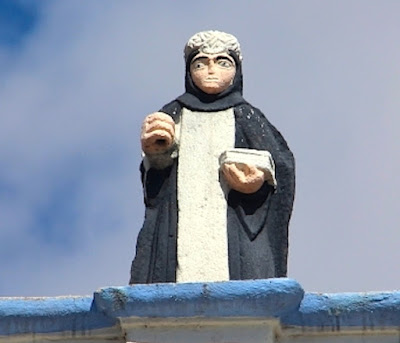 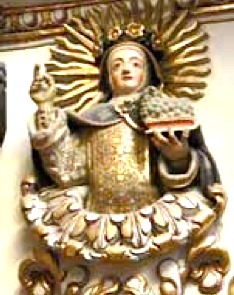 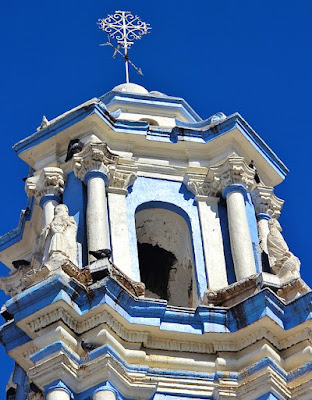 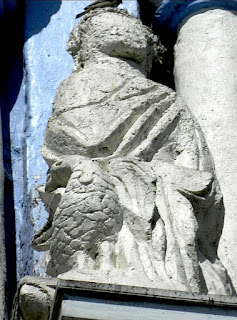 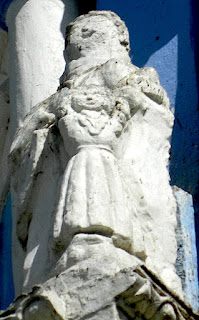 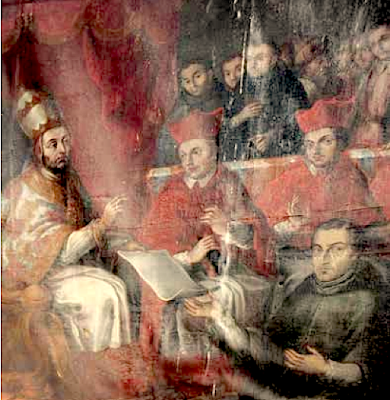 In the next of our series on the notable altarpieces of Northern Mexico, we visit the rebuilt/reassembled parish church/cathedral of Nuestra Señora del Rosario, a historic mining town in the state of Sinaloa, to view its newly restored main retablo. 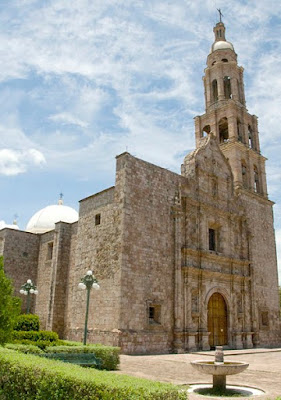 In 2014 restoration was completed of this magnificent, gilded baroque altarpiece in the baroque church of El Rosario—the finest of three such retablos in the state of Sinaloa. Conservation measures involved cleaning, fumigation, repair of carved details including the original statuary, and re-gilding the entire altarpiece. 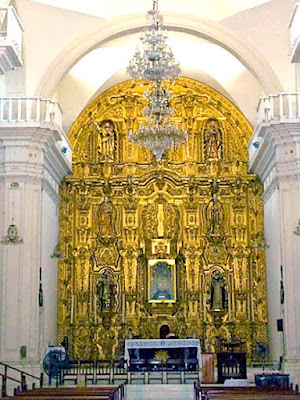 Funded by the riches from the local mines, which provided the gold with which it is sheathed, the 30 foot high altarpiece dates from the 1770s and is designed in the sinuous, late baroque manner called the Churrigueresque, or barroco estípite style.
It was moved in the 1950s together with the 18th century church after reassemblage on its present site (the church was on the point of collapse due to subsidence from mine workings.) 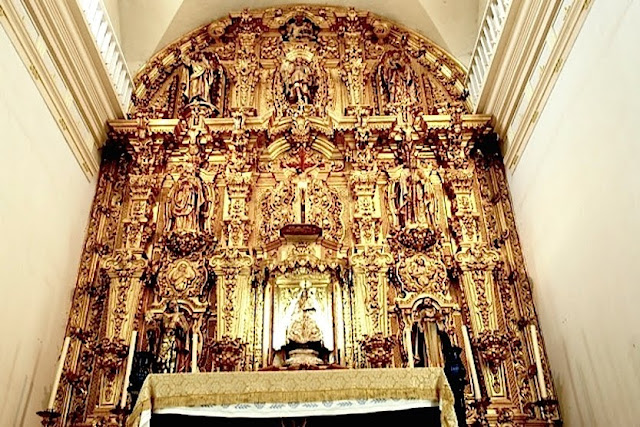 Carved from cedar, the retablo is framed by four prominent, be scrolled, estípite pilasters that enclose equally bold, serpentine interestípites or niche-pilasters.

The niches support rather than enclose statues of saints, that comprise saints Paul and Joseph with the Christ Child on the lower tier, and Anne and Joachim, the parents of the Virgin, above them. The Archangel Gabriel dominates the curved top tier accompanied by St. Dominic and St. Peter. 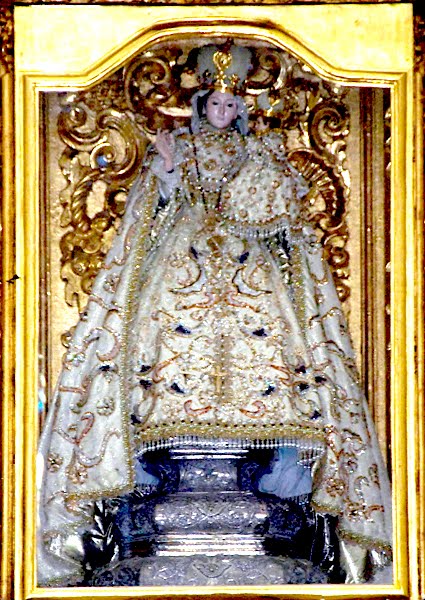 The richly costumed figure of the patron, the Virgin of the Rosary, occupies the curtained niche on the lower tier.
See our earlier posts in this series: the Ureña altarpiece of Saltillo/Monclova; Parras de La Fuente; Sabinas Hidalgo;

We thought our readers would be interested in this new exhibit of striking photographic images, mostly drawn from colonial Mexico, by our friend and colleague, the eminent Dallas photographer Carolyn Brown.
To view selected images from the show go to Carolyn's website 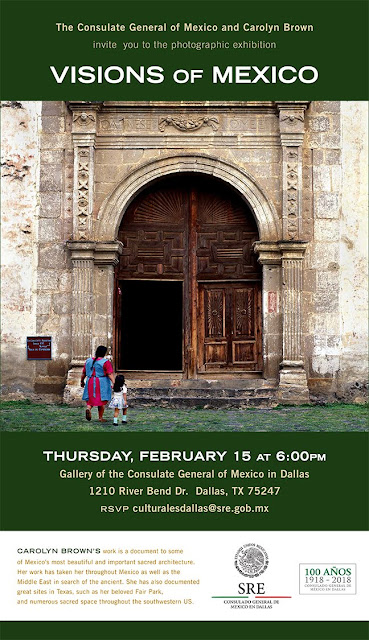 Posted by Richard Perry at 10:43 AM No comments: 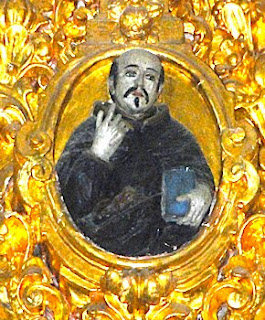 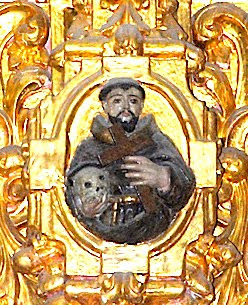 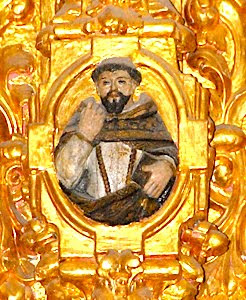 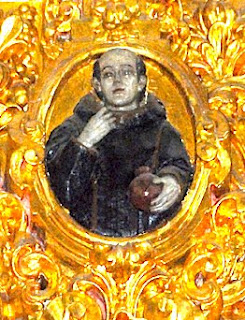 Restored in the 1990s and recently undergoing further conservation, this is the finest altarpiece in the state of Nuevo León and its immediate region.
Although the designer of the altarpiece is so far undocumented, its reputed fabrication in Zacatecas, where the Ureña workshop was then finishing up its retablo commission for the church of Santo Domingo, together with its striking similarity to the Saltillo/Monclova altarpiece, make it quite plausible that it was also a product of the prodigious Ureña taller.
*Known as El maestro transhumante, the "peripatetic master", Felipe de Ureña was the most influential of the Mexican born architect /designers to introduce and expand the Churrigueresque or barroco estípite style into New Spain. During the second half of the 18th century, together with family members, he was primarily responsible for the spread and subsequent evolution of this ornate late baroque style into cities across Mexico, especially along the silver routes north of Mexico City. Primarily an innovative designer and fabricator of altarpieces, he later adapted the barroco estípite style as it was called, for church facades. His elegant and distinctive designs are recognized as the  "felipense" style.
* The winged circle is a signature motif in many Ureña altarpieces.
Other Ureña altarpieces: Rayas Chapel; Aguascalientes; Cata; La Valenciana; Saltillo/Monclova;
text © 2018 Richard D. Perry
images by Niccolò Brooker except where noted
Posted by Richard Perry at 12:43 PM No comments: 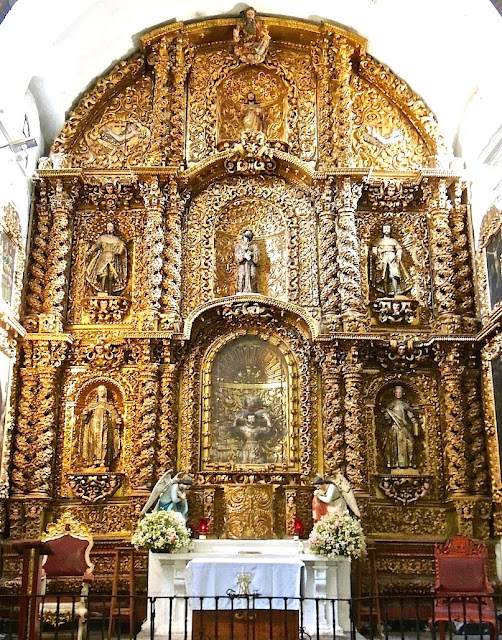 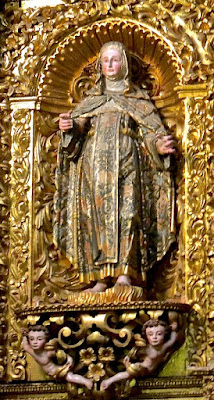 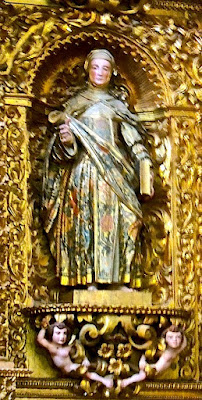 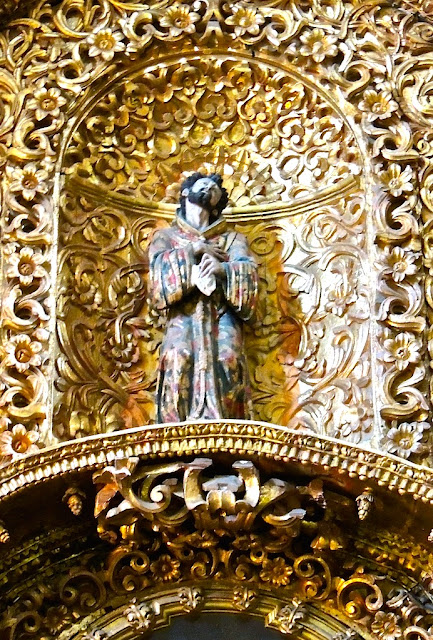 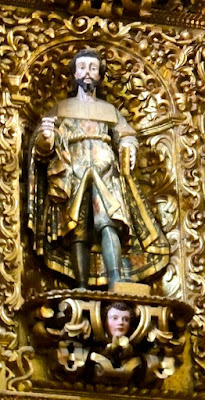 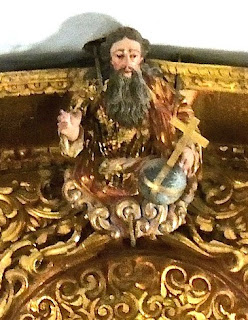