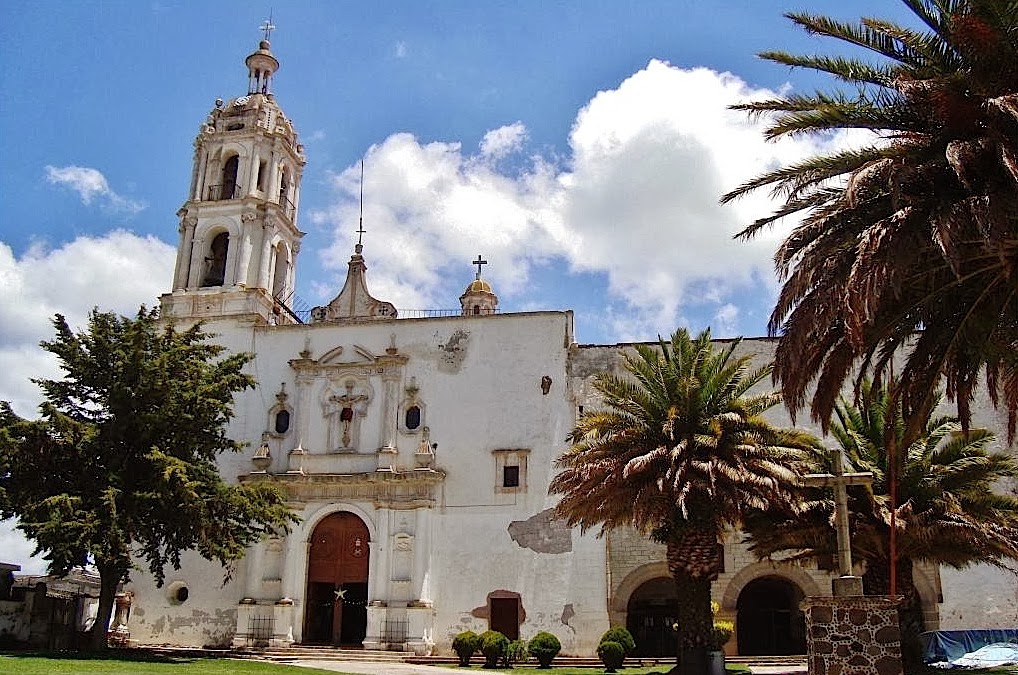 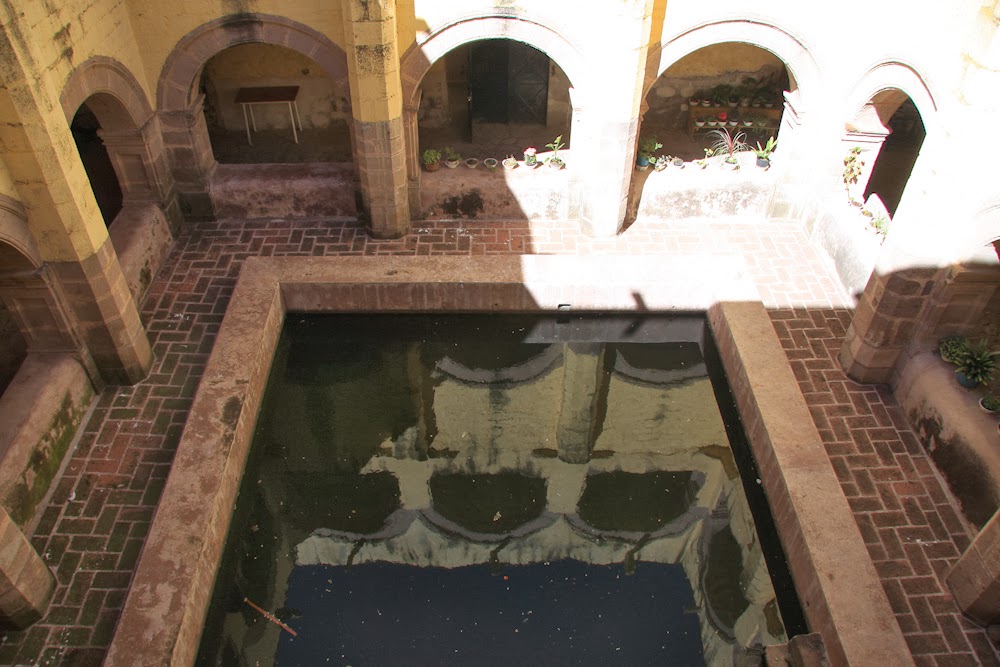 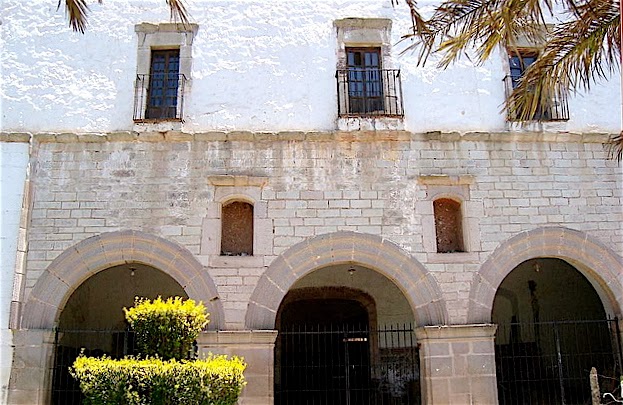 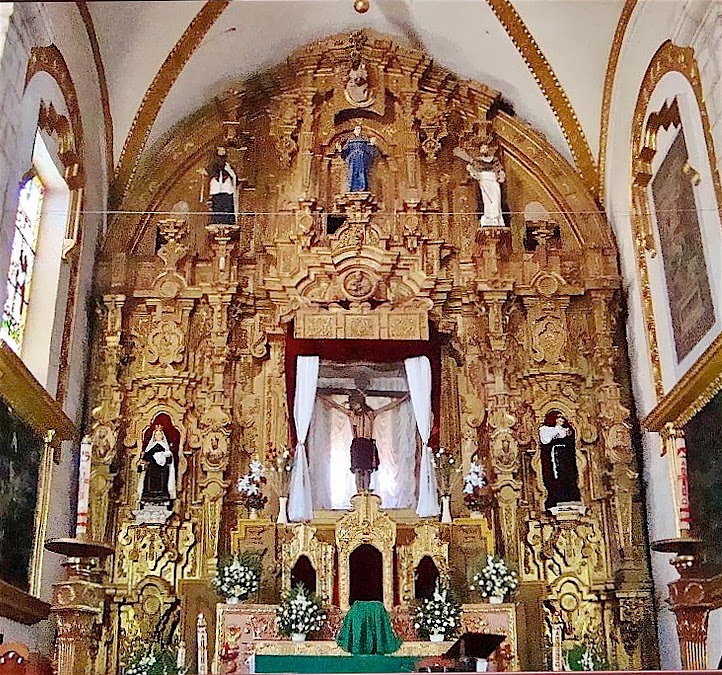 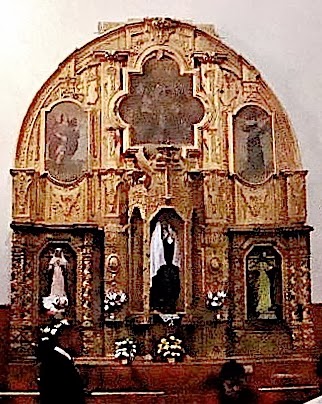 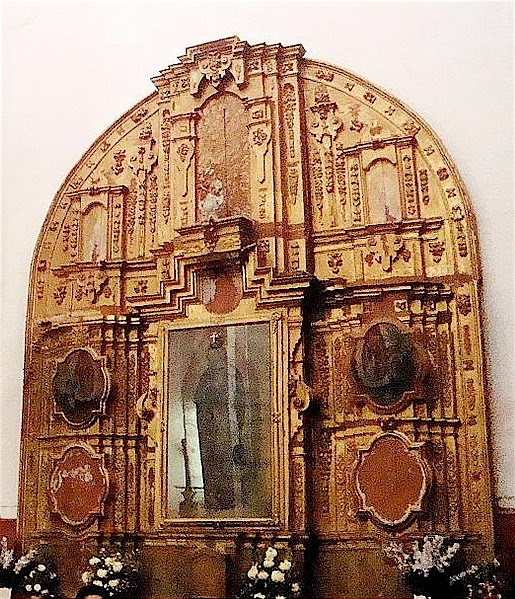 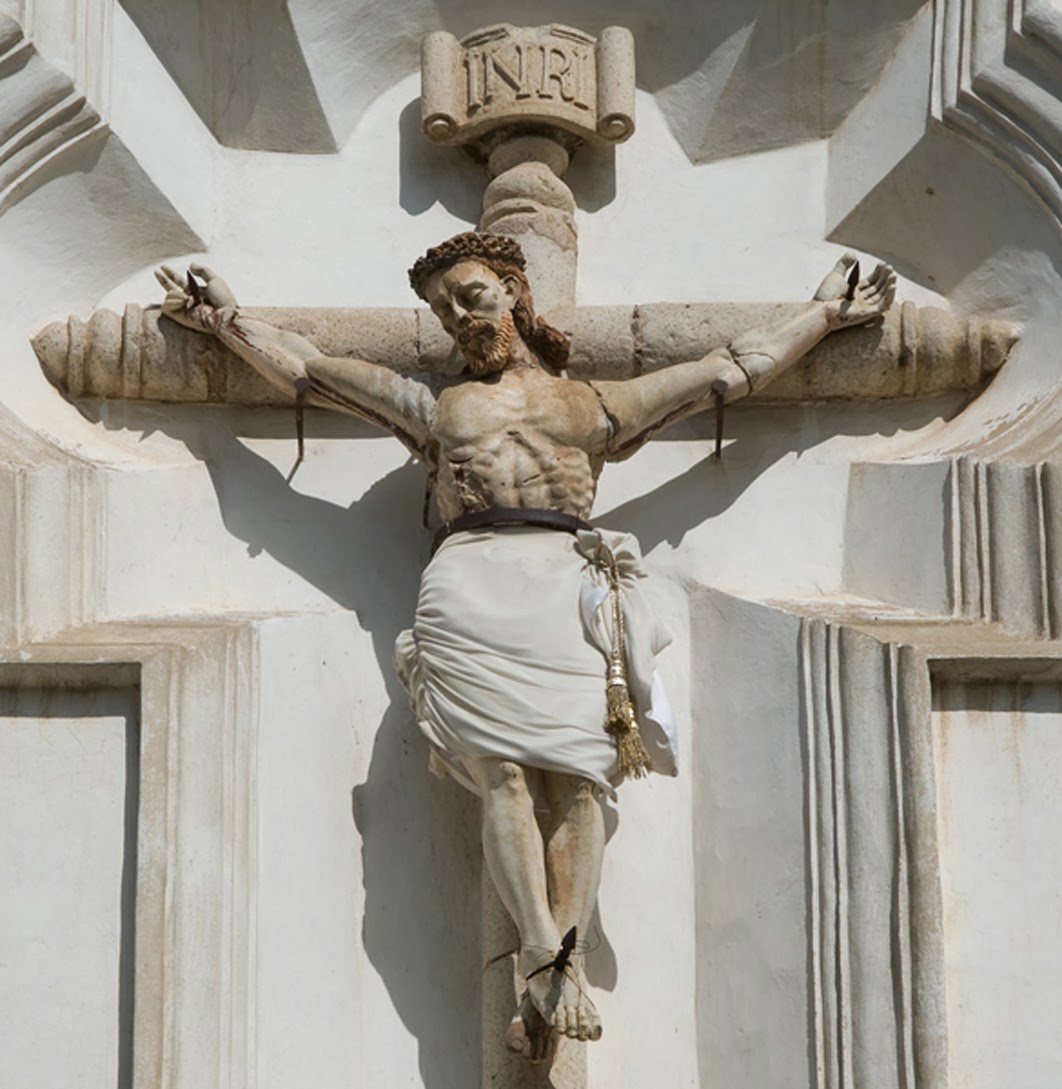 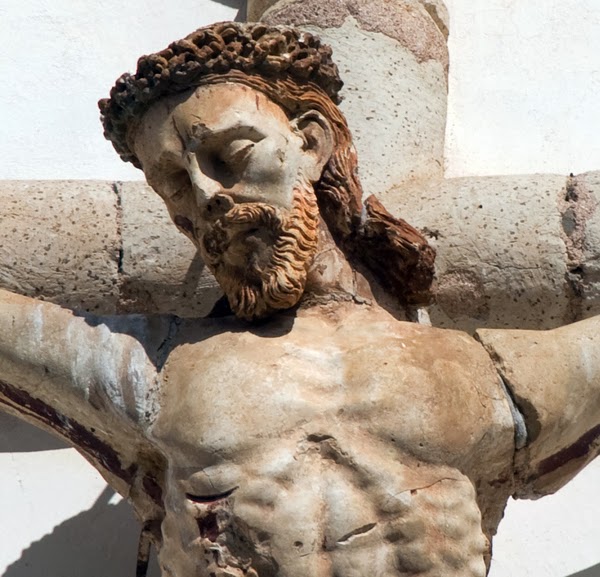 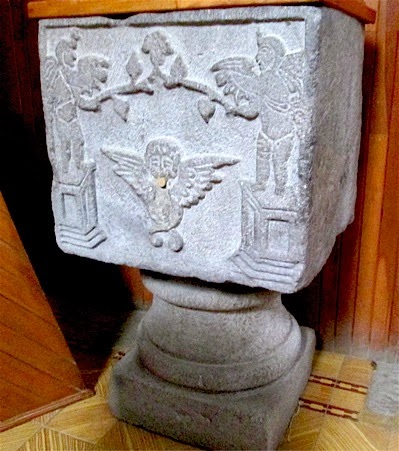 We accept no ads. If you enjoy our posts you may support our efforts
by acquiring our guidebooks on colonial Mexico
Posted by Richard Perry at 5:32 PM No comments:

On Tuesday February 25th, after breakfast, the party split into two groups; one returning to the Tlaxiaco church to hear the organists in the party play selected short pieces on the organ, the other visiting the nearby archeological site of San Martín Huemelulpan.

We reunited at San Pedro Martir Yucuxaco and then continued on to the Dominican church at Santiago Tejupan (of which more to come).

Finally we all headed back to the town of Santa Maria Tiltepec, where we explored the sculpted and painted colonial church, and then enjoyed a farewell feast as guests of the Cruz Garcia family, where local musicians played, people danced and the mescal flowed.


Once again, in the company of other aficionados of Mexican art, music and life, we enjoyed the always memorable cavalcade of sounds, sights and tastes that is the Oaxaca Historic Organ Festival. Viva!

We are going to take a break for a few days to get used to our new computer, then we will look at some of the Oaxaca churches we visited in greater detail. Stay tuned!

Posted by Richard Perry at 11:40 AM No comments:

We have already reported on the festival events at Tlacolula on Sunday February 23.  On the following Monday participants headed north once again for two day trip to the Mixteca Alta, to view several as yet unrestored organs and enjoy a final concert in the magnificent early church of Asunción Tlaxiaco (which we will look at in more detail in a forthcoming post).

First, the group visited San Mateo Yucucui, and journeyed to remote San Juan Ixtaltepec, located more than hour east of Yanhuitlan on a camino blanco from Nochistlán (more on these two churches later)

Following a late meal in Teposcolula, we all toured the Dominican priory church of Saints Peter and Paul, viewing the old organ and enjoying the play of the afternoon sun on the golden stonework of the church front and its grand, newly restored open chapel.

The highlight of the day came when we attended an evening concert in the Tlaxiaco church by organist José Francisco Álvarez  accompanied by the baroque violinist Vladislav Badiarov, who electrified the audience with his brilliant solo performance of a Bach fugue.

Posted by Richard Perry at 5:03 PM No comments:

On Saturday we traveled north to the Mixteca Alta region to hear two concerts, the first at the folk baroque church of Tamazulapan. Here the musical program was supplemented by a marimba and the guitar trio Terceto Cuicalli.
We also visited the grand organ case at Santiago Teotongo (more on Teotongo to come)
In the afternoon we converged on the Santo Domingo Yanhuitlan, newly restored and the grandest of the 16th century Dominican priories in the region
Here we were entertained by the organist Jesús López Moreno with the vigorous assistance of the trumpeter Juan Luís González, in a varied program of baroque music. 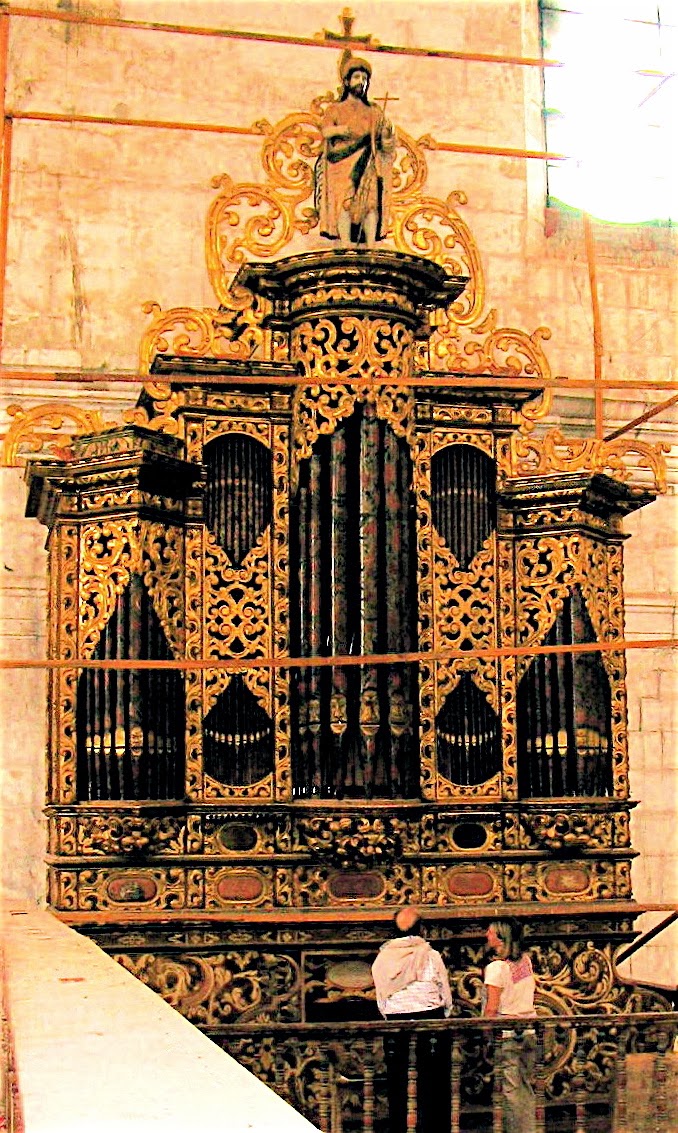 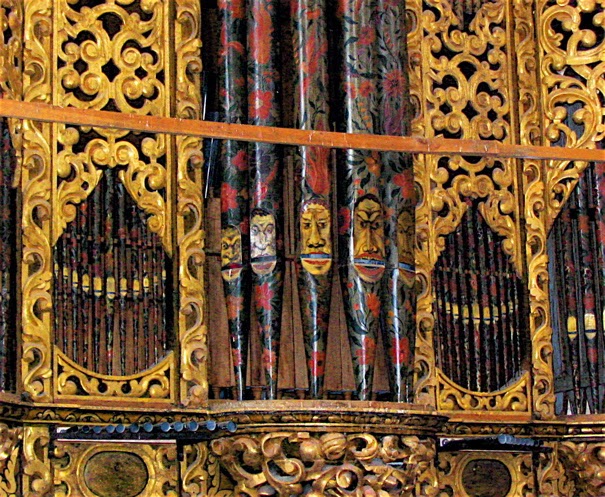 The grand organ at Yanhuitlan, resplendant with restored gilding and painted pipes, sits on its own pillar beside the choir loft.


Our last stop of the day was at San Andrés Zautla where we were entertained with music, dancing and dinner by the villagers, followed by an organ concert accompanied once again by marimba player Gabriela Edith Perez Diaz and the guitar trio Terceto Cuicalli.

text ©2014 Richard D. Perry.  photographs by the author except where noted.

Posted by Richard Perry at 2:19 PM No comments:

Following our report of the events at Tlacolula (we will have more to say about the church and its treasures in later posts) we now report on other highlights of the Historic Organ Festival:
The Spanish organist Roberto Fresco began the festivities on Thursday evening (February 20) with a public concert in Oaxaca cathedral. The large audience enjoyed a varied program emphasizing baroque music from the 17th and 18th centuries.

On Friday morning the group set off to view unrestored organs in communities in the valley south of the city including San Andrés Huayapam, where the villagers welcomed us with a bounteous lunch including mescal, the local alcoholic beverage.
En route we made stops to see unrestored organs in the churches of San Matias Jalatlaco and San Miguel Tlalixtac (more on Tlalixtac later) and briefly enjoyed the shade of the famous Tule tree.

In the evening, in contrast to the earlier Cathedral concert, the program at the city Basilica of La Soledad was free to the public and featured traditional musical favorities from different regions of Oaxaca, adapted by Cecily Winter, the organist and IOHIO director, with the help of the energetic percussionist Valentín Hernández.

text © 2014 Richard D. Perry photography by the author except where noted.

Posted by Richard Perry at 3:53 PM No comments:

At the end of February 2014 your authors had the pleasure of attending the Tenth Historic Organ Festival in the southern Mexican state of Oaxaca.
In the past we have participated in several of these festivals, organized every two years or so by the Instituto de Órganos Históricos de Oaxaca (IOHIO) a wonderful organization that seeks to document and restore—whenever possible to playable condition—the numerous old colonial pipe organs, large and small, found in churches across the region.

During the 2014 festival we visited a number of unrestored organs and enjoyed several concerts on restored instruments, both in the city of Oaxaca as well as in smaller towns where the local community always extended us a warm welcome, often including special regional meals and even serenades by the village brass band!
The landmark Tenth Festival was officially recognized by the issuance of a set of new postage stamps illustrating six of the Oaxacan organs, together with the opening of a special exhibit of historic documents relating to the organs that was mounted in the impressive Burgoa Library of the Santo Domingo Priory and Cultural Center in Oaxaca city.

Organ concerts featuring prominent musicians from Europe, Mexico and the US were held in Oaxaca Cathedral and the great basilica of La Soledad in the city. Other concert locations across the region included the imposing colonial Dominican churches of Tlaxiaco, Tlacochahuaya, Tamazulapan and Yanhuitlan.

We begin our report with an account of the newly restored organ at the popular market town of Tlacolula, whose inauguration was the highlight of the festival.


As noted, the main event of the Tenth Historic Organ festival was the inauguration of the beautiful 18th century organ in ornate 16th century church of Santa María de la Asunción Tlacolula, a popular market town in the eastern Valley of Oaxaca.

This magnificent colonial pipe organ, accompanied by a pair of hand bellows, stands in the choir loft, accessible via narrow caracol stairway.  Documents in the church archives indicate that the organ was built in 1791 by the organ builder Manuel Neri y Carmona for $700 pesos, with an additional $200 pesos for the gilding.

However, one of the tallest interior trumpet pipes is incised with the date “1666,” and stylized square crosses appear on several other interior pipes. Since the last Oaxacan organs with Dominican crosses incised on their pipes date from the 1740s, we can assume that the pipework of the Tlacolula organ was built before the case of 1791. Based on this, the Tlacolula organ may have the oldest complete pipe work of any organ in Oaxaca, which may have been first heard as far back as the 17th century.

The 1791 case of the organ was painted and gilded in an ornate baroque manner at a time when such decoration was going out of style. The finely rendered, expressive faces on the façade pipes are similarly out of historical context, in contrast to the ferocious masks typical of other organs of the period.

Restoration of this superb early organ is now complete. During the first phase of the project, the organ’s stunning red, black and gold case was restored together with the decorated façade pipes under the supervision of the Oaxacan restorer Eric González Castellanos.  The second phase, completed only weeks before the festival date, was the restoration of the organ interior itself, including the pipes, keyboards and mechanical components, directed by the Spanish organ builder Gerhard Grenzing.
The instrument was unveiled on February 23rd 2014 in a memorable presentation ceremony, in which we were present, under the auspices of IOHIO. This was followed by a dedicatory mass and blessing by the archbishop of Oaxaca, and a memorable inaugural concert with the Oaxaca City Chorus, soprano Lourdes Ambriz, and maestros Rafael Cardenas and Robert Fresco playing the organ, whose mellow sound filled the church for the first time in more than a century.

This event drew an overflow crowd of local townspeople and area visitors who filled the church as well as a large marquee set up in the church atrium. Colorful local dancers and musicians welcomed visitors that included numerous regional religious and civic dignitaries.

Support for this project came from the Tlacolula community and the Fundación Alfredo Harp Helú of Oaxaca (FAHHO) as well as several other organizations  and private subscribers.  And as a representative of the US group Los Amigos de Arte Popular (LADAP) I was privileged to present IOHIO with $1000 to assist in meeting the considerable restoration expenses.
text © 2014 Richard D. Perry photography by Rosalind Perry and courtesy of IOHIO

Posted by Richard Perry at 4:40 PM No comments: