This is the third in a series on the architecture and sculpture of three traditional villages, of Los Reyes, San Lucas and San Juan Evangelista, on the shores of Lake Cajititlan, south of Guadalajara.
Each community boasts a colonial church or chapel, ornamented in classic Jaliscan popular baroque style by talented local stonecarvers. 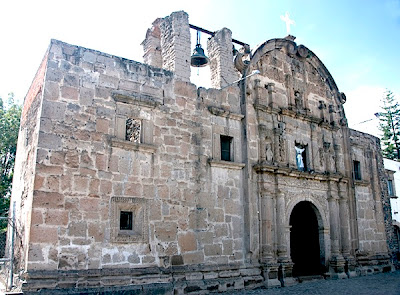 The 18th century lakeside mission of St. John the Evangelist is somewhat grander than neighboring San Lucás (see earlier post.) Occupying its own atrium and cemetery a few kilometers to the east, it offers a feast of colonial stonework to intrigue the visitor. 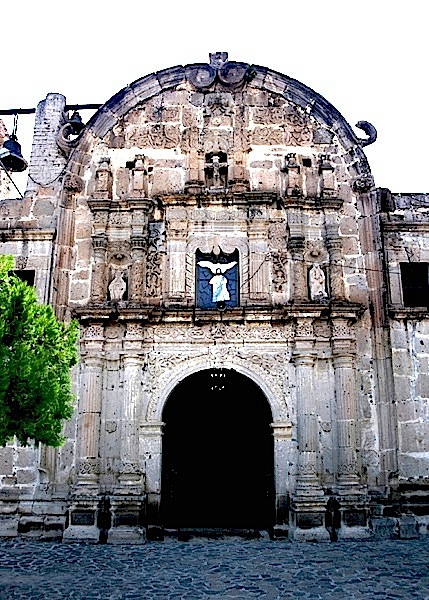 As at San Lucás, the broad church front boasts a sculpted retablo facade in the regional, folk baroque style. 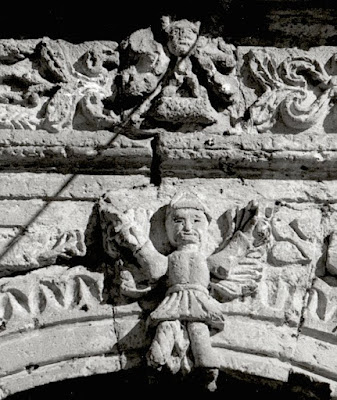 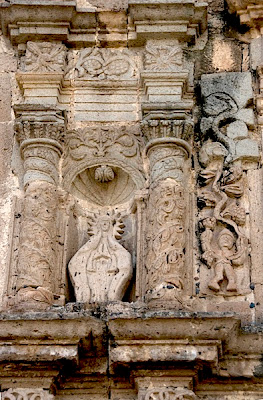 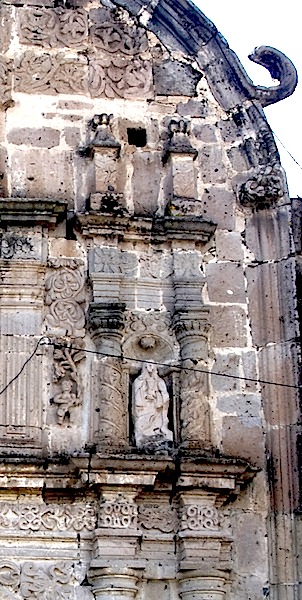 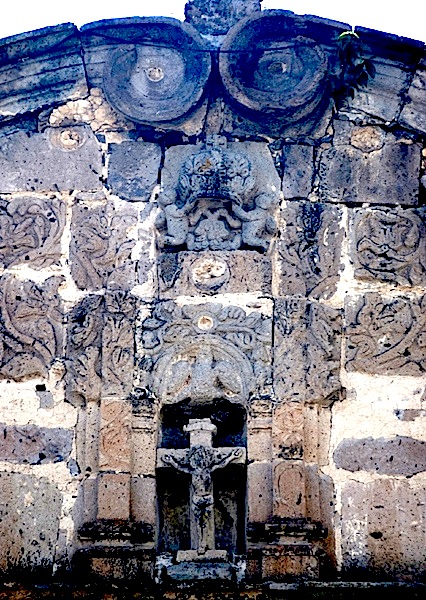 An impressive baroque gable with outsize, projecting volutes caps the facade, enclosing a niche with a carved stone crucifix that is surmounted by a dove symbolizing the Holy Spirit. At the apex of the gable, cherubs hold a crown over the Marian monogram.

The lateral doorway is also richly ornamented, with layered jambs and an ogee arch with another primitive angel in flight at the center. A sinuous vine relief snakes along the foliated upper frieze sprouting fruit and tendrils.
Narrow double arcades divide the basilican interior, propelling the eye towards the polygonal apse which frames a handsome, gilded altarpiece in provincial baroque style. The keystones along the arcades are imaginatively carved with the Instruments of the Passion, and other reliefs appear between the arches. 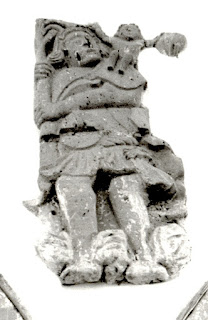 Although there are no known inscriptions at San Juan Evangelista, it seems certain that the stone carving here is by a member, or members of the Sebastián family of skilled masons whose work we saw at San Lucás and the Guadalupe chapel at Los Reyes.
text © 2012 Richard D. Perry;  photographic images ©Niccolo Brooker.  All rights reserved
For more information on the colonial arts and architecture of Jalisco, consult our guidebook, Blue Lakes & Silver Cities, available from Espadaña Press
Posted by Richard Perry at 4:35 PM No comments:

This post is the second in a series on the architecture and sculpture of three traditional villages, of Los Reyes, San Lucas and San Juan Evangelista, on the shores of Lake Cajititlan, south of Guadalajara.
Each community boasts a colonial church or chapel, ornamented in exquisite Jaliscan popular baroque style. 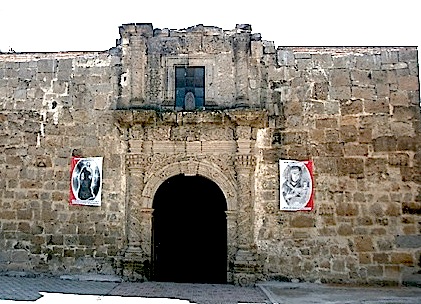 Here we look at the chapel of San Lucas (St. Luke) on the southern side of the lake, nestled in a churchyard of old crosses, gravestones and acacia trees. 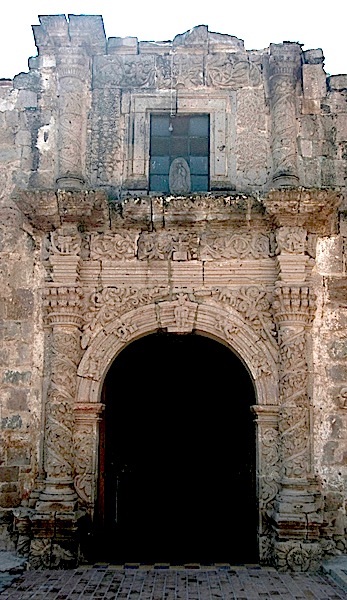 Most of the intricately carved portal has survived, its surfaces enlivened with naive reliefs of angels and assorted animals, including a two-headed eagle and several oxen—the emblem of St. Luke—that peer out from the whorls and tendrils of sculpted foliage. 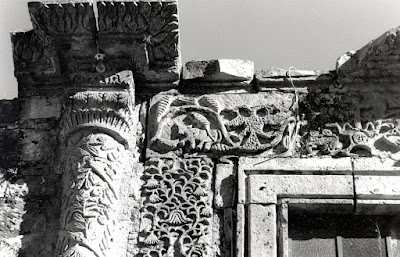 Spiral columns wreathed with vines frame the arched entry and choir window overhead, while densely carved foliage fills the intervening spaces.
An effigy of Luke the Evangelist with his Gospel is carved on the keystone while cherubs hurry around the archway, carrying books, Instruments of the Passion  or playing antique musical instruments (a design almost identical to that at nearby Santa Anita Atlixtac)

Angels also appear in medallions at each end of the frieze above playing the violin and guitar.  Other examples of architectural sculpture adorn archways in the church and adjacent patio, featuring densely carved effigies of eagles and archangels.
A statue of the Virgin of Guadalupe is perched precariously in the choir window.
An inscription with the date 1786 above the sacristy doorway includes the name of master mason Martín Sebastián, one of a family of local stone carvers responsible for the architectural decoration of this delightful church as well as others around Lake Cajititlan. 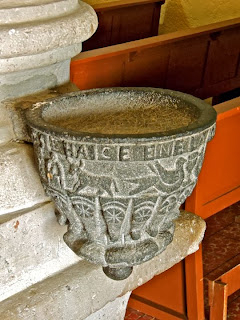 And inside the church an old stone font bears the effigy of a running bull
text © 2012 Richard D. Perry;
photographic images by the author and ©Niccolo Brooker and Jim Cook.  All rights reserved
For more information on the colonial arts and architecture of Jalisco, consult our guidebook, Blue Lakes & Silver Cities,
available from Espadaña Press 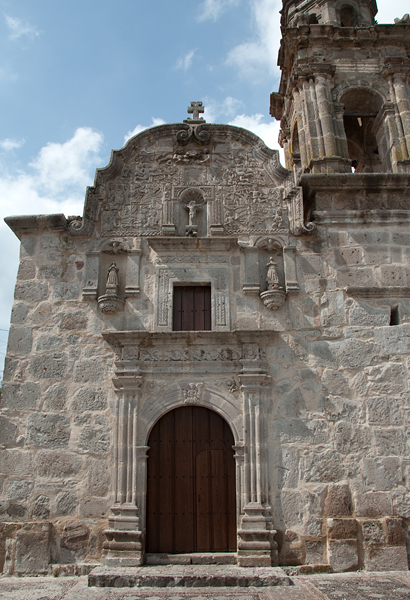 This inaugural post is the first in a series on the architecture and sculpture of three traditional villages of Los Reyes, San Lucas and San Juan Evangelista, that line the shores of secluded Lake Cajititlan, precariously close to the expanding metropolis of Guadalajara, Jalisco.
For our initial page, we look at the Santuario de Guadalupe, located across the plaza from the principal lakeside church of Los Reyes Cajititlan.
Formerly the centerpiece of the old Indian hospital here, the chapel was rebuilt in the mid 18th century and has been partly restored. Its more intimate scale, exuberant folk baroque detailing and unmistakable indigenous flavor provide a contrast to the more imposing, but sparely ornamented facade of the basilica opposite.

Above the elegant baroque doorway, ornate shell niches project from the facade, surmounted by eagles. Statues of the Virgin of Sorrows and St. John the Evangelist, traditional mourners of Christ at Calvary, occupy the lower niches. The stocky figure of Christ hangs from the cross in the upper niche. 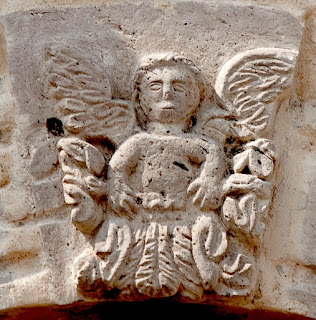 Below a delicate frieze of sunflowers and fleurs-de-lis, a chubby angel emerges from a flower in the carved relief over the doorway. 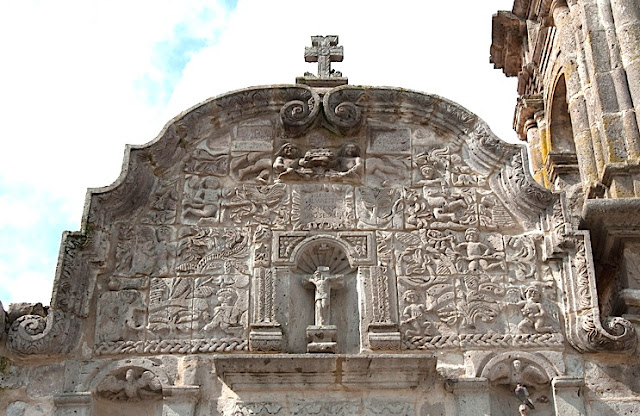 The facade terminates in sculpted gable crowned by a foliated stone cross. The gable is a virtual stone tapestry of coronets and smiling cherubs entwined in a tangle of rampant relief foliage, framed by the sinuous lines of a projecting scrolled cornice.
Almost lost in the whirl are plaques bearing the names of the local officials, the alcalde and regidor, and even more importantly, that of the sculptor, Miguel Sebastián, dated 1767—a member  of a talented family of native stonecarvers whose work can also be seen across the Lake at San Lucas and San Juan Evangelista. 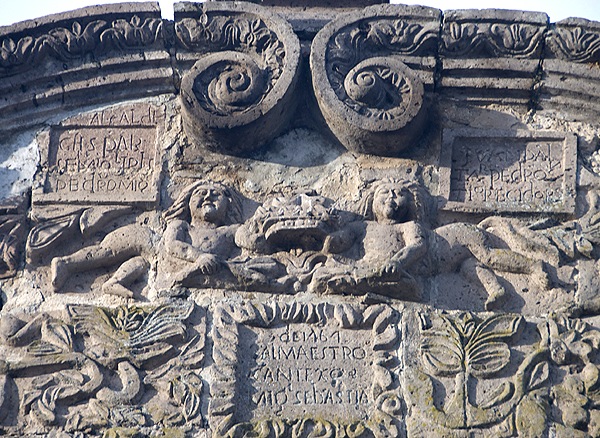 For more information on the colonial arts and architecture of Jalisco, consult our guidebook, Blue Lakes & Silver Cities, available from Espadaña Press

Posted by Richard Perry at 12:09 PM No comments: