We continue our series on Mexican crosses of note with a description of the atrium cross at Ucareo.
The rugged region east of Lake Cuitzeo in Michoacán is home to an extraordinary variety of elaborately carved atrium crosses. In addition to that of Ucareo, they include those at San Matías El Grande, Jácuaro and Ciudad Hidalgo.
Founded in 1555, the hilltop priory of San Agustín Ucareo was one of earliest Augustinian houses to be established in eastern Michoacán. Although the church was later remodeled with an austere classical front, the magnificent 16th century atrium cross still stands before the church door.
Brilliantly sculpted on all sides, the Ucareo cross is, in our view, one of the finest in Michoacán. Enclosed by a projecting border, the extraordinary variety of reliefs that distinguish the cross are picked out with clarity in an especially harmonious composition. 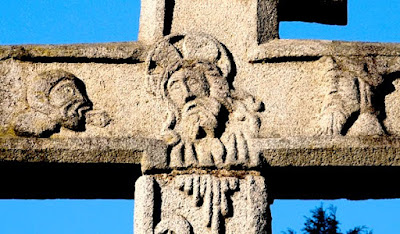 On the front, the haloed Face of Christ at the crossing inclines with anguish, apparently gushing blood. Christ is flanked by a turbaned head, probably representing Caifas, and another onlooker spitting an epithet. Disembodied nailed hands point outwards from the arms.
The Instruments of the Crucifixion are arranged in a column along the shaft. Half way down, blood streams from a Wound, apparently held by two hands, into the Chalice. A Jug and Ewer appear at the foot.  A simian-like skull projects from the cubed pedestal supporting the cross with the crossbones of Calvary carved below.


The Reverse Side
The back side of the cross is more densely, if less conventionally, carved than the front. One unusual element is the triangular sunburst at the crossing. Radiating enormous rays, it features a large eye at its center, a motif that may symbolize the Trinity or more likely, the Eye of God, who watches over all things—a unique representation on an atrium cross to our knowledge.
A writing Hand on the left and a solitary Malchus’ Ear on the right are the only reliefs on the arms, while the Augustinian emblem of the pierced heart is carved above the eye. 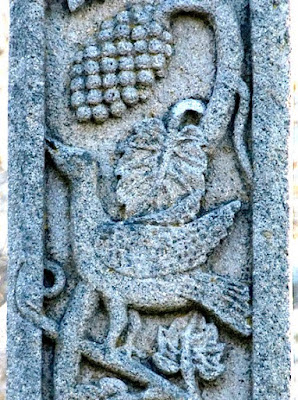 Laden with grapes and inhabited by small birds, a sinuous and skilfully carved Eucharistic vine snakes up the shaft. At the foot, incongruously, is a beautifully realized relief head of Christ; sculpted in a more refined, detailed manner than the boldly outlined Instruments above, it suggests a different hand and possibly a later date.

Even more Passion symbols line the two remaining sides of the cross: on one side a Corn plant winds between a Lance and a Ladder, atop the woven monogram of Christ on the pedestal below.
A column of Dice cascades down the other side flanked by a Spear and a Reed with an odd looking Sponge. A Hand holding a tress of hair and a Sword and another Ear are squeezed in at the top, while a Lantern is outlined at the foot.
In our view one of the most intriguing and beautifully sculpted crosses in Mexico.

The sumptuous baroque temple at Panotla, dedicated to St. Nicholas of Bari, is located a few kilometers west of the city of Tlaxcala. It displays an opulent stone and stucco facade reminiscent of the nearby shrine to the Virgin of Ocotlán.


The Atrium Cross
In 1908, the American antiquarian Frederick Starr visited Panotla, noting in his book, In Indian Mexico, “Before the churchyard stands a quaint old cross of stone, dated 1728, upon which are represented all the symbols of Christ’s passion; a long inscription in Aztec is cut into the base.”
Today this handsome colonial cross is missing. Only the inscribed base is still in place. Based on early photographs, this archaic stone cross, with its stubby arms and neck, was quite unlike others in the Tlaxcala region.
The primitive Face of Christ at the crossing resembled that of a Pharoah, with spreading locks and a zigzag Crown. In part because of their odd shape and position as well as their eroded state, several of the numerous Passion reliefs on the arms and long shaft were ambiguous. Two relief Nails with four pierced rosettes flanked the Face. Above Christ’s head, a band of wavy lines, possibly indicating Coins, crosses the neck below a more complex, sunburst style rosette set with outlying buds or points—perhaps also intended as a Crown. However, another stylized, wreathlike Crown was juxtaposed beside a Chalice atop the shaft, below which an enigmatic figure appeared apparently bearing a cross—a unique in- stance of this motif, if our interpretion is correct.
Further down, a fan of three Nails, a Hammer, a Scourge and diminutive crossed Spear and Reed led to an open Hand beside a Column and Rooster, ending with a Ewer at the foot.
Alhough the whereabouts of the missing cross is unknown, the pedestal upon which it stood still remains, inscribed with the date of 1728, as noted by Starr. 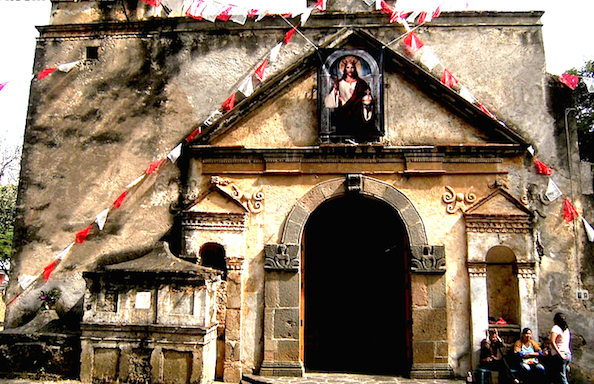 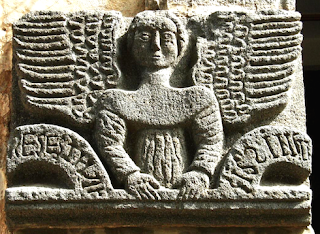 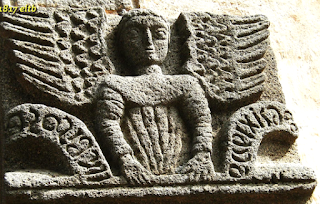 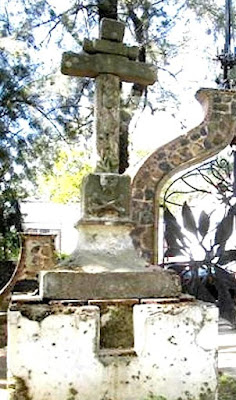 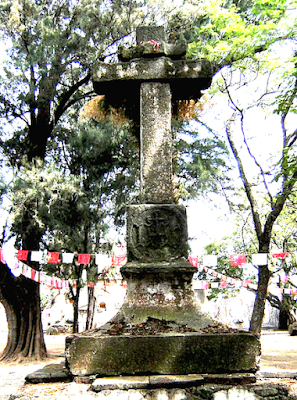 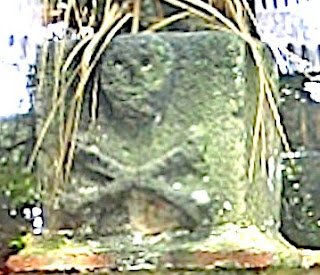 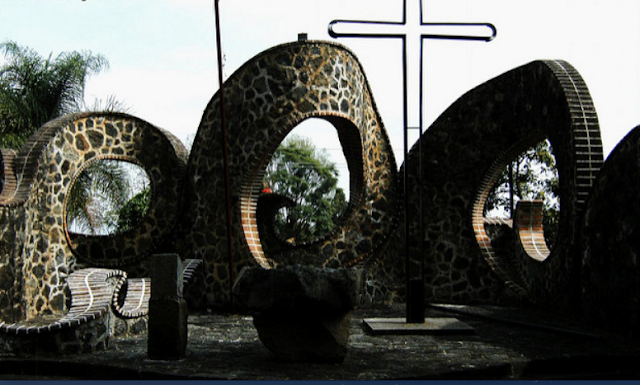 For a new wrinkle in our recent series on colonial stonework, we pay another visit to the Pueblan convento of San Juan Cuauhtinchan.    In a previous post on the murals there, we drew attention to the famous cloister mural of an Annunciation flanked by an eagle and jaguar drawn and colored in pre hispanic style (Cuauhtinchan = House of the Eagles) 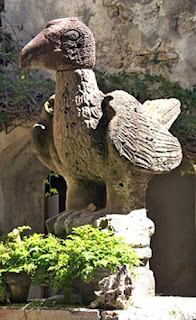 We also noted the large eagle statue atop the cloister fountain.

Sculptures of an eagle and jaguar reappear atop the parapet above the cloister. The eagle spreads his wings while jaguar shows his teeth and roars. 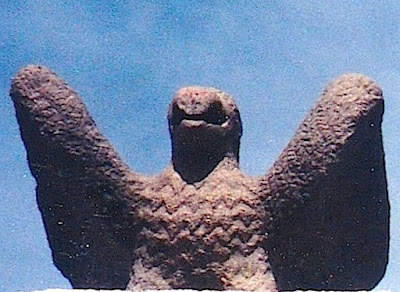 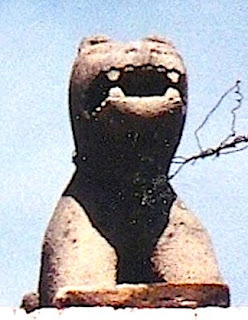 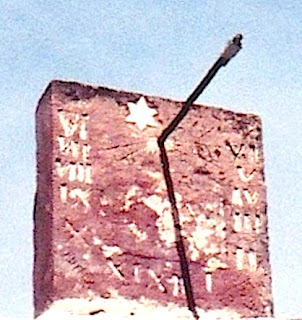 This time they flank a colonial sundial, which seems to still be functioning!
text © 2018 Richard D. Perry.  color images by Robert Jackson
Posted by Richard Perry at 12:42 PM 1 comment: 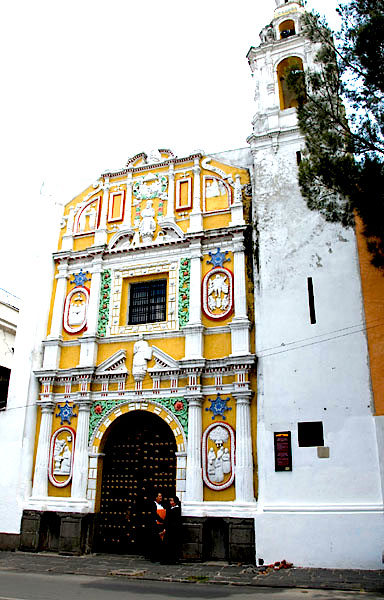 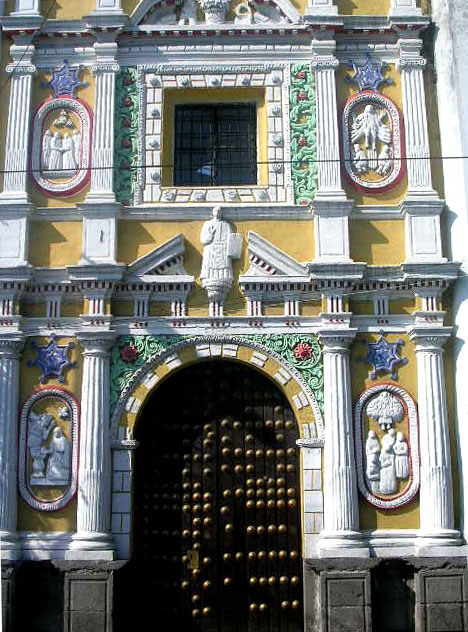 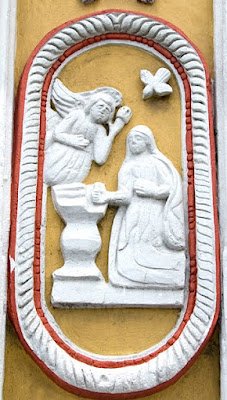 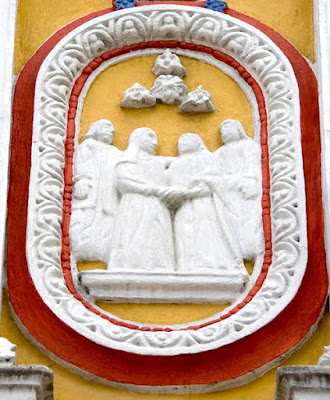 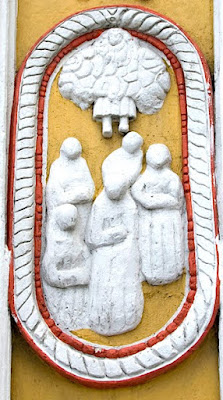 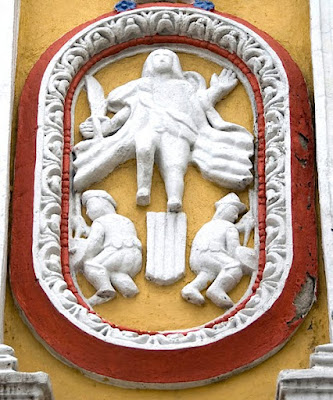 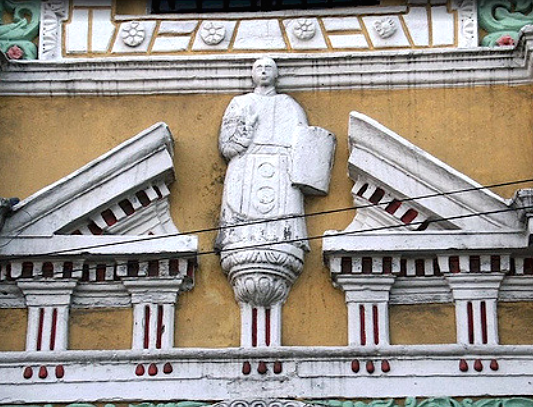