The variety and persistence of the Pueblan popular baroque tradition seems unending. Situated on the scenic western slopes of the snow clad Pico de Orizaba, Mexico's highest volcanic peak, the lakeside town of Aljojuca (Aljojuca = Sky Blue Waters), boasts one of the most sightly "folk baroque" churches in the Pueblan highlands.
The Facade
The elegant "retablo" facade rises through two stages to a scalloped gable. It was recently repainted a brilliant white, with the architectural elements boldly outlined in scarlet and ocher trim. Crisply carved estípite pilasters faced in stucco frame the ornate sculpture niches on either side.
The niches retain their statuary: carved figures of the archangels, or Seven Princes, which are accented in ocher shades as with other sculptural reliefs across the facade.
Although we may describe this church front as "folk" baroque, because of the popular flavor of its statuary and ornamental reliefs, its overall design is in fact harmoniously proportioned and quite sophisticated in its detailing—the stylistic equal of many classic urban church fronts configured in the late 18th century barroco estípite style. Inside the church, the nave is lined with wooden retablos, all framed in a late baroque style similar to the church facade. Painted brilliant white with blue and gold accents, most display a variety of late colonial devotional paintings in popular style. 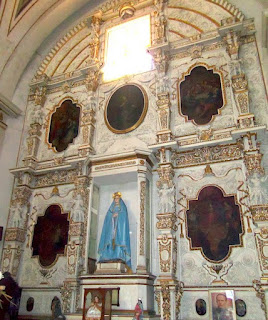 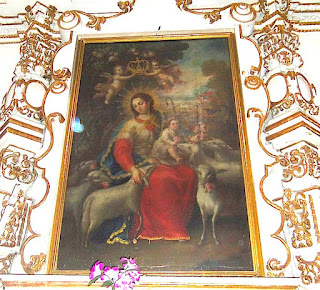 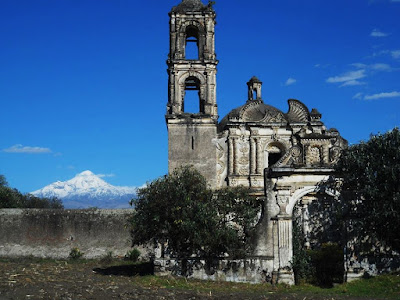 Another local monument of interest in view of the volcano, also fashioned in ornate, late baroque style, is the grand, now abandoned and reputedly haunted chapel of the Hacienda de Caxcantla.
Posted by Richard Perry at 12:46 PM