As a pre-eminent regional Spanish center, the colonial city of Puebla played an innovative role in the development of the Mexican baroque.  The city boasts some of the finest examples in Mexico of 17th century baroque architecture, most notably the austere, Mannerist style cathedral, built of dark gray stone and a monument to 17th century sobriety.
However, the cathedral and other 17th century city churches were only the precursors to the ornate and colorful city buildings of the later, popular inspired, baroque edifices that captured the imagination of later colonial designers and the public alike, sparking imitation across the Puebla region, to the rest of Mexico and even beyond.
In fact Puebla can claim to be the cradle of the popular baroque in architectural ornament. In the 1700s, a new vernacular style bloomed that made innovative use of colorful tile and carved, painted stucco—distinctive local specialties that Pueblan designers and artisans had already mastered and exported to neighboring regions. Together, these two decorative modes—tile and stuccowork—define el barroco poblano.


Tile work is a tradition unique to colonial Puebla developed from the long established brick, tile  and pottery industries of the city, especially the manufacture of azulejos, or glazed earthenware tiles decorated in the Spanish talavera style, named after the Spanish city of Talavera de la Reina, a major ceramic center.
By the 18th century Pueblan glazed azulejo and unglazed red ladrillo tiles blossomed in patterns of red, yellow, green and earth tones—hues that created the dazzling, color filled facades and domes of churches and mansions alike.


In this series we look at the tiled fronts of selected churches in the city of Puebla starting with the monumental Franciscan monastic church of the Five Wounds located just south of the historic center.

San Francisco de Las Cinco Llagas
(5 de Mayo/ 14 Oriente)
This great Franciscan monastery was founded in the 1550s beside the Rio San Francisco—which today runs beneath the sinuous Blvd 5 de Mayo—across from the early Spanish settlement on the other bank.

Intended to minister to the indigenous and mestizo population, who had settled there to build and service the Spanish city, the monastery was linked with the various barrios in which they lived.
The towering lateral (west) facade of San Francisco, dating from the 1760s, is the archetype for tiled city churches of the time. The multi-tiered center pavilion, carved from the somber gray quarry stone of the region, is an imposing example of the ornate Mexican Churrigueresque style. The principal reliefs is that of St. Francis receiving the Stigmata.
The surrounding tiled facade features large panels of colorful reflective azulejo tile set against a simply laid but effectively contrasting background of matt ladrillo—a pattern repeated and elaborated upon in numerous other city church fronts. 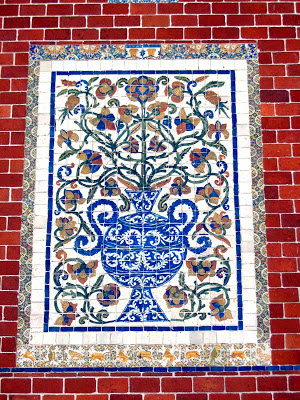 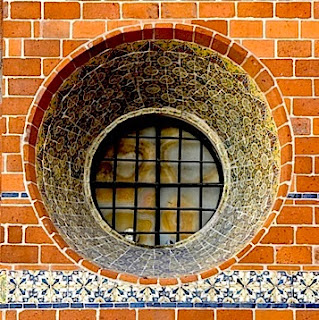 The most interesting panels are the decorative crosses are set on either side of the porch—all reusing earlier tilework, often indiscriminately. Below them are inlaid portraits of St. Andrew, on the right, and of La Purísima on the left, the latter showing some of the traditional attributes of the Virgin Mary—sun, moon, star, fountain, etc. 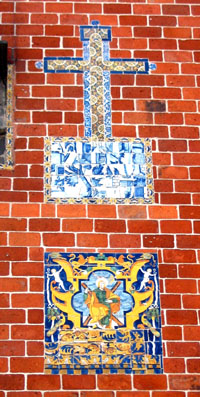 
We accept no ads. If you enjoy our posts you may support our efforts
by buying our guidebooks on colonial Mexico
Posted by Richard Perry at 5:02 PM No comments: