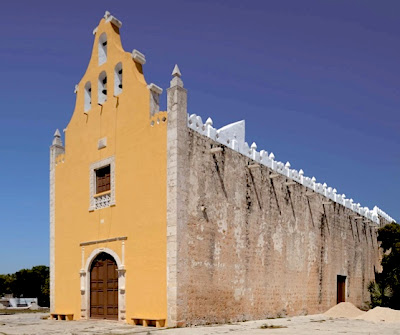 Tetiz
Second only to the Virgin of Izamal, the Virgin of Tetiz today enjoys the greatest devotion of any marian santo in Yucatan. Thereby hangs a tale:
Early in 1746 the newly appointed Spanish bishop of Yucatan, Francisco Martínez de Tejada had occasion to pass through Tetiz, then an impoverished visita of the main regional mission at Hunucmá. The church, such as it was, was described as, "... made of sticks and straw, and in the final stages of decay."
As he approached the simple wooden image of the Virgin on the altar, the bishop recognised her features as those of a pious but poor woman he had once known in Seville, who, on receiving alms of a silver peso, had promised to rebuild "a ruined house for herself and her son."
When the astonished prelate raised the hem of the Virgin's robe to kiss it, he saw the same peso coin resting underneath. Amazed and inspired by this seemingly miraculous sign, the bishop immediately undertook to build a new church on the same spot - the present church - and dedicate it to the Virgin of The Assumption.
Raised on a platform built with stones from a demolished Maya pyramid nearby, the single nave of the church extends westward from the remains of a 16th century chapel, terminating in a facade with a lofty espadaña bordered by baroque scrolls.
This distinctive church front is strikingly similar to several other Yucatecan facades of the mid-1700s rebuilt during the stewardship of Bishop Martínez de Tejada. All feature rectangular fronts capped by elegant espadañas in the form of rising concave curves bookended by prominent carved scrolls, and pierced by tiers of arched bell openings. 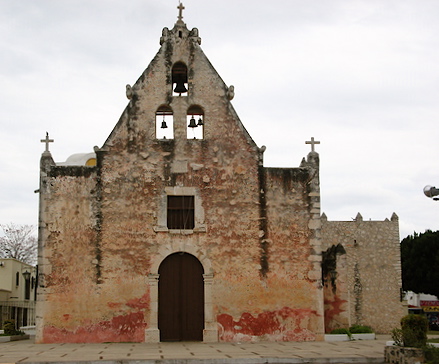 Itzimná
The first colonial building in this former Maya village on the outskirts of Mérida—originally named for Itzamná, the ancient Mayan reptilian sky deity—was an arched Indian chapel, part of which may form the fabric of the raised sanctuary of the present church. Usually painted red and crowned by a lofty, scrolled espadaña, the facade of this attractive 18th century church is a prominent landmark in this now fashionable suburb. 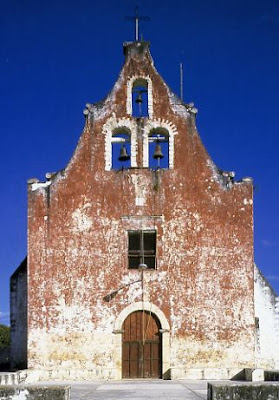 Cacalchén
Cacalchén is close to the Maya site of Aké. Behind its walled forecourt, the 18th century church is also graced by an espadaña with projecting scrolls strikingly similar to those at Itzimná and Tetiz.
At the rear stand the remnants of an earlier mission, complete with portería, carved convento doorway, and what may be an original posa chapel—now the domed Chapel of St. Francis. The entire structure is raised on a platform, probably of ancient Maya origin. 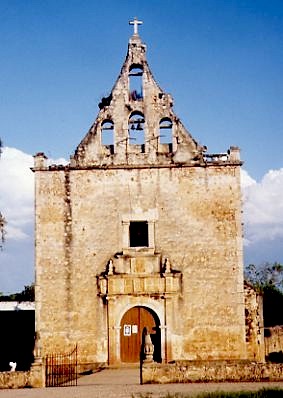 Like those at Cacalchén, Itzimná and Tetiz, the church was rebuilt under the auspices of  bishop Francisco Martínez de Tejada, whose inscribed escutcheon is displayed over the frieze above the doorway. Unfortunately, the fine gilded retablos he reportedly installed inside the church are no longer in evidence. 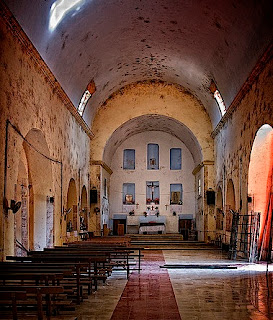 for itineraries and full details on the colonial churches of Yucatán, order our classic guide
Posted by Richard Perry at 5:03 PM 2 comments:

Water, Water: the Pilas of Oaxaca

As a follow up to our post on the city of Oaxaca, we look at a selection of colonial baptismal and holy water fonts found in regional churches across Oaxaca.

One of our favorite fonts in Oaxaca is this carved and painted example, with shell motifs, relief foliage and Mixtec style serpentine legs from Tiltepec in the Mixteca Alta region.  It is a close copy, or perhaps the model for the very similar pila at the great priory of nearby Yanhuitlan * of which Tiltepec was an early tributary.

One of the more dramatic examples is this composite "angel" font at Santa Ana Zegache, one of a pair of holy water basins near the entrance incorporating serpentine foliated pedestals.
The true baptismal font in the body of the church is older, boldly carved with foliage and winged angel heads.

* look for our forthcoming posts on Yanhuitlan

Our guide to colonial Oaxaca
Posted by Richard Perry at 10:04 PM No comments: 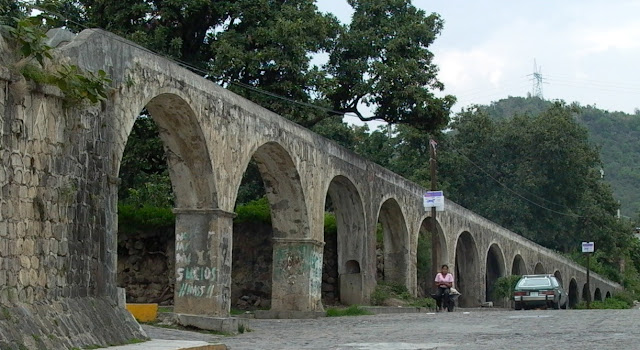 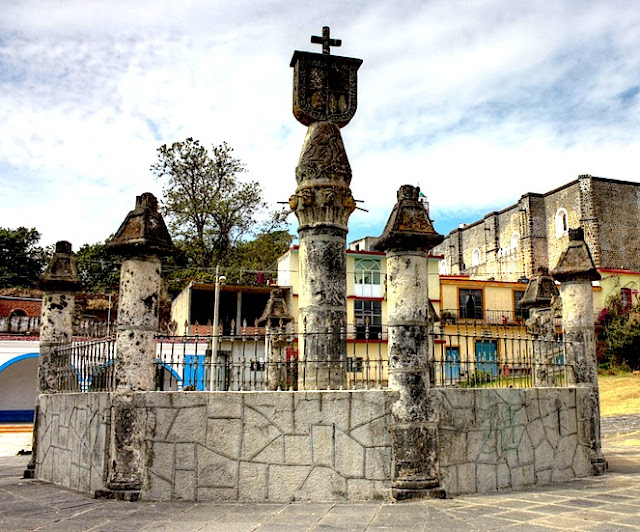 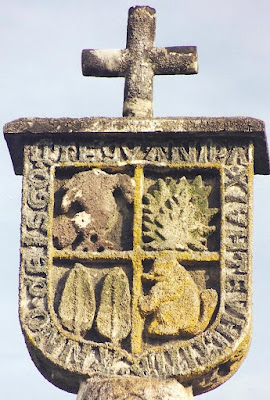 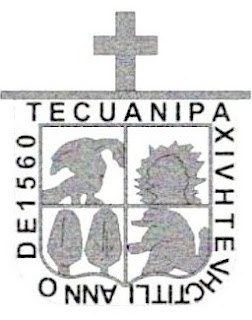 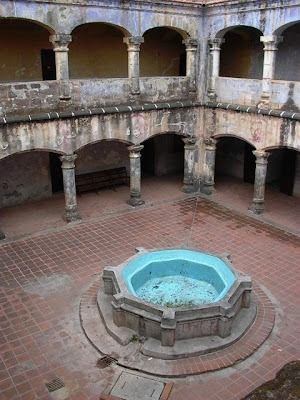 Water, Water: The Pilas of Tlaxcala

We resume our series on water with a look at selected fonts and fountains in colonial Mexico:
As we saw in our previous posts, some of the finest 16th century colonial stonework is found in the state of Tlaxcala. Much of the earliest stonework however, consisted of baptismal fonts, the indispensable vessel for the initial rite of religious conversion.

Here we show a varied group of four fonts from the city of Tlaxcala and two more from the region.
For more on the early colonial monuments of Tlaxcala and Puebla,
consult our guidebook Mexico's Fortress Monasteries 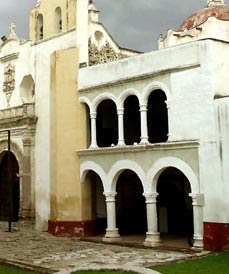 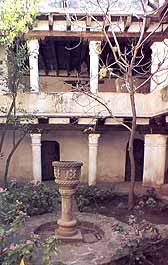 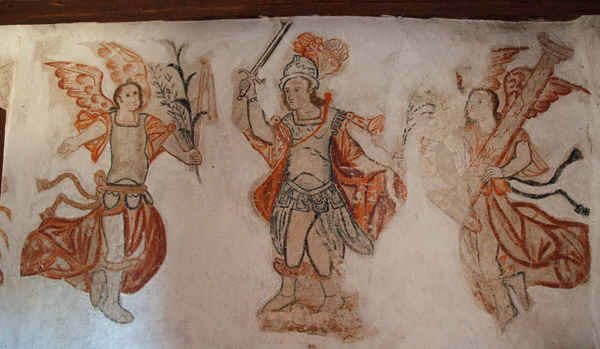 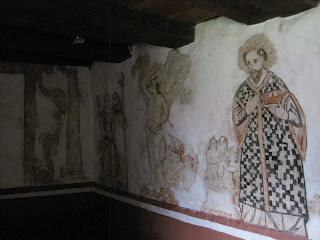 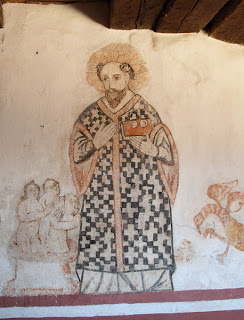 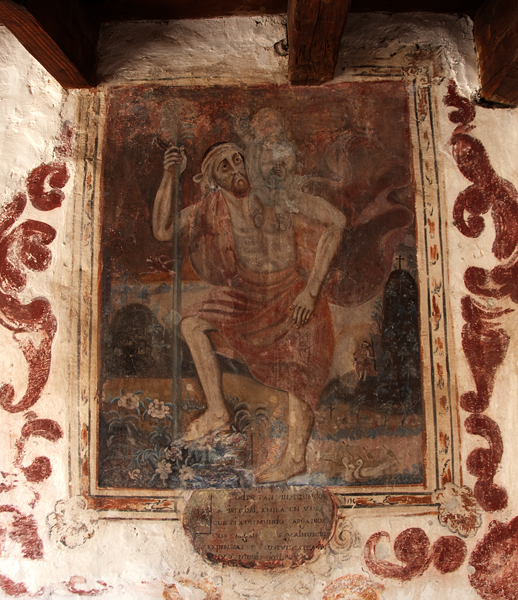 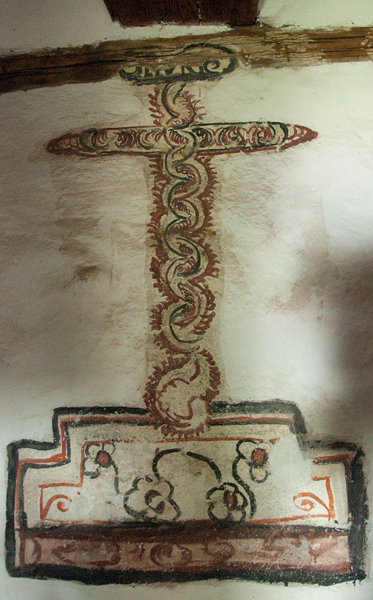 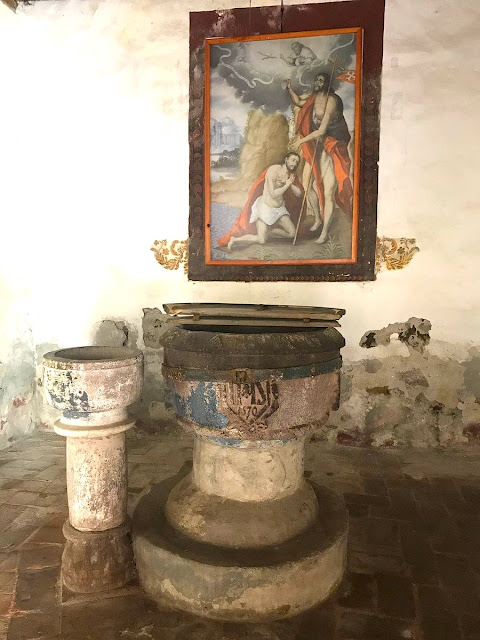 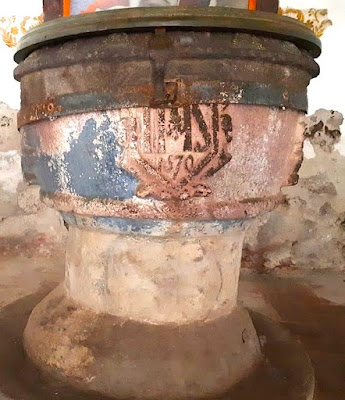 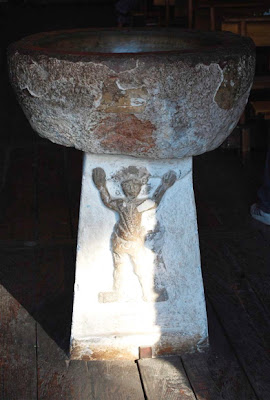 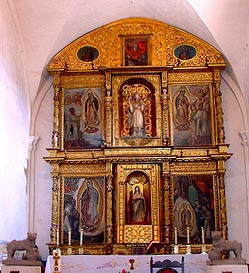 The Retablos
Completed in the late 1600s, the gilded main altarpiece of San Nicolás was designed in Renaissance style with the addition of Baroque spiral columns. A profusion of ornament includes carved eagles and angels in addition to floral and "grotesque" motifs.
The upper niche showcases a statue of the saint in his bishop's robes and regalia. The Virgin of Guadalupe also appears in the lower niche, flanked by four large canvases depicting her Apparitions on the hill of Tepeyac.
A second ornamental altarpiece, of intricate anástilo design from the 18th century, also survives in the nave.
text © 2013 Richard D. Perry. photography courtesy of Niccolo Brooker and Marina Heyman
Posted by Richard Perry at 7:24 PM 1 comment: 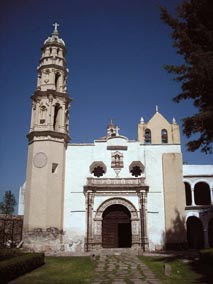 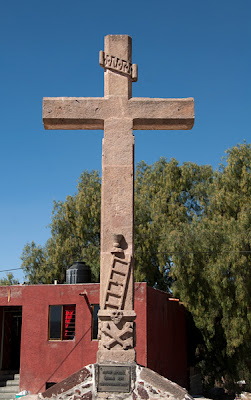