Tree murals
One widespread pictorial device in colonial Mexican art, both in murals, reliefs and easel painting, is that of the tree. Although employed in several variations of complexity and scale, the fundamental theme is that of genealogy, primarily of the religious orders and their founders.
The origin of the motif is the Tree of Jesse, by tradition a depiction of the ancestors of Christ, shown in a tree which rises from Jesse of Bethlehem, the father of king David. This was based on a passage from the Book of Isaiah: ” … And there shall come forth a rod out of the stem of Jesse, and a Branch shall grow out of his roots"
From medieval times, this genealogical device was adopted by religious and secular leaders alike to visually represent and legitimize their ancestral claims to power and authority.
Mexican pictorial representations usually show a symbolic tree or vine with spreading branches rooted, often literally, in the founding figure. While some portrayals are truly treelike, like the painted relief in Santo Domingo de Oaxaca, and the murals at Copándaro and Zinacantepec, which are complete with birds, flowers, leaves and hanging fruit, others are stylized to the point of resembling a map or chart, which was often an underlying intent, as at Cuilapan or Cuernavaca.
Often even more sweeping are the giant painted panels adorning later colonial churches, vastly more complex and challenging to read or even take in: for example the Franciscan genealogies at San Francisco in Puebla and the church of San Fernando in the capital.
text © 2015 Richard D. Perry
Posted by Richard Perry at 1:29 PM 1 comment:

We present another in our occasional series on the depiction of catholic saints, both well known and obscure, in Mexican art.
Blessed Peter González, referred to in Spanish as Pedro González Telmo or simply San Telmo, was a Castilian Dominican friar and priest, born in 1190.  Educated by his uncle, the Bishop of Astorga, he became a celebrated preacher, accompanying King Ferdinand III of Castile and Leon (St. Ferdinand) on his expeditions against the Moors.
Thereafter he devoted his life to the evangelization of, among others, mariners along the coast of Spain. González died in 1246, and was beatified in 1254 by Pope Innocent IV.
Although never formally canonized, he is popularly called San Telmo in Spanish speaking countries. He was revered as the patron and protector of sailors, especially during the hazardous early years of exploration, and transatlantic voyages during the colonial period.

He is best known for his association with St. Elmo's fire, a phenomenon that appears on ships at sea during thunderstorms and is regarded by sailors with awe for its glowing points of bluish light atop the masts.
Although not portrayed as frequently as other popular saints in Mexico, he does appear in a handful of early colonial murals, invariably shown holding a ship or galleon, his principal attribute.  On occasion he also holds up a candle or flaming torch—a Dominican symbol as well as one of fire.
Here are portraits of San Telmo from three early Dominican missions in Mexico:
text and color images © Richard D. Perry
See our earlier posts in this series:
San Nicolás de Tolentino; San Antonio Abad, Duns Scotus, San Charbel Maklouf, St Rose of Lima, St Peter Martyr, San Dionisio, St Ursula.

Posted by Richard Perry at 2:01 PM No comments: 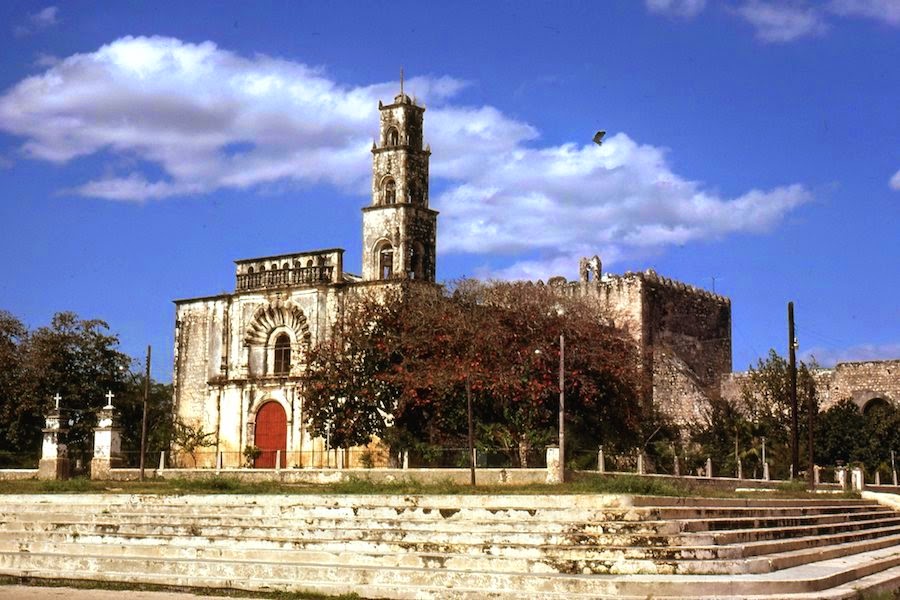 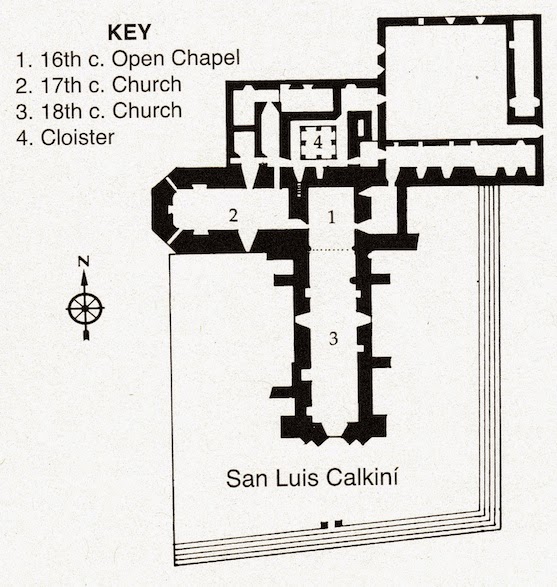 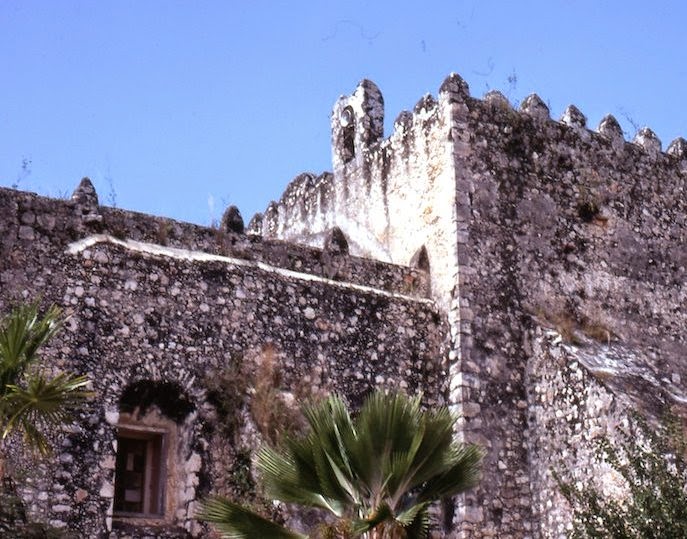 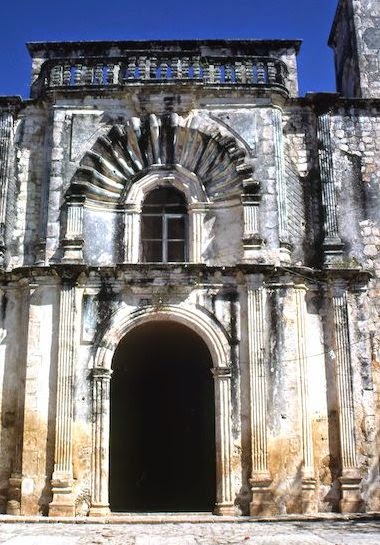 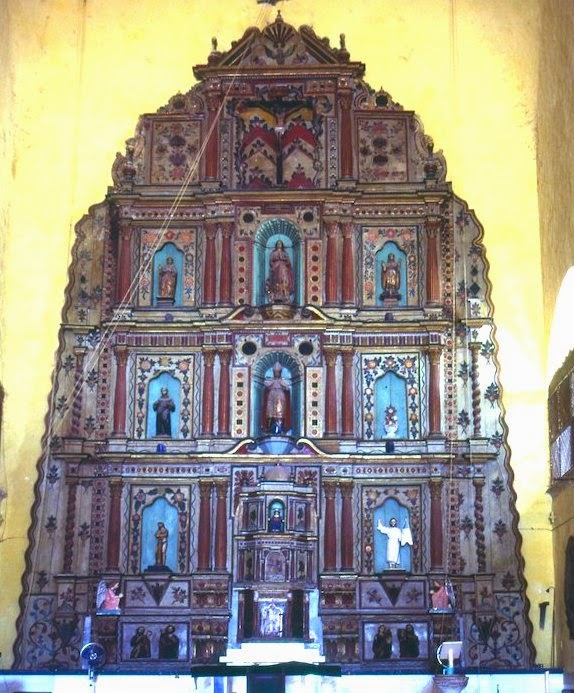 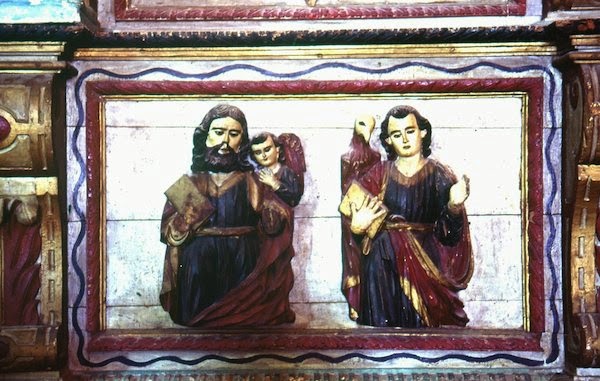 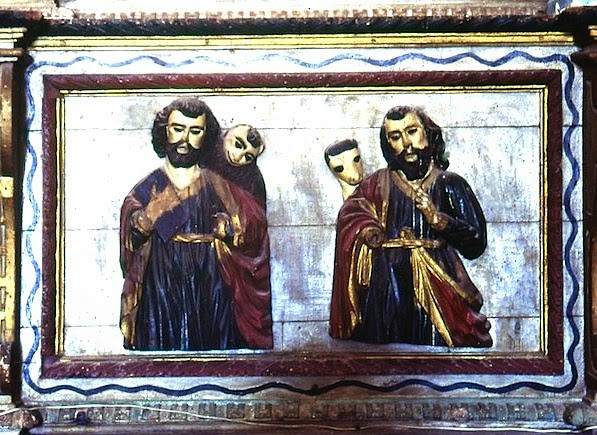 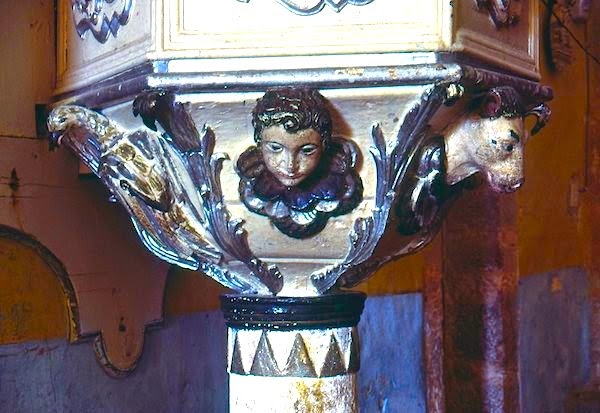 Posted by Richard Perry at 11:32 PM No comments:

In our last post on the Dominican mission of San Pablo Huitzo we included an image of a frescoed Gothic niche in the convento.
Here we take a closer look at the details, especially the broad, painted, monochrome frame around the now partly effaced centerpiece (originally the backdrop to a piece of statuary).
This is a classic example of how a traditional "grotesque" foliated border, taken from an Italian or Flemish book illustration of the period, has been enlarged and "Mexicanized" by 16th century indigenous artists, to include native birds, fruits, flowers and foliage in a dramatic, more stylized composition.
Traces of other painted grotesque friezes and ornament are found elsewhere in the Huitzo convento and in early churches and convents throughout Mexico.*
Similar, often even more fantastic and imaginative designs survive in painted as well as sculpted frames and friezes throughout the missions of 16th century Mexico, monuments to native ingenuity in the adaptation of European pictorial motifs.

*Look for our forthcoming guide to Mexico's early colonial murals.
Posted by Richard Perry at 8:52 AM No comments: