This is the first in our series of posts featuring unusual or colorful saints, as portrayed in images found in the churches of Mexico and, in particular, Oaxaca. 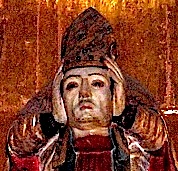 San Dionisio, or Saint Denis (also called Dionysus, Dennis, or Denys) was an early Christian martyr, a saint and a "cephalophore"—one who is generally depicted carrying his or her own head, signifying that the subject in question had been beheaded.
In the third century, Saint Denis was made Bishop of Paris, but his relentless Christian proselytizing upset the local pagans, so he was arrested by the Roman authorities, tortured and finally beheaded.
Undeterred, Denis reputedly picked up his head and continued walking, preaching a sermon as he went.
He is venerated in the Roman Catholic Church as the patron of Paris, France. Ironically, the name of this severe saint derives from Dionysius, the sensuous Roman deity of wine and riotous pagan revelry.  Denis' headless (heedless?) preaching after martyrdom has led to his being usually shown as a Bishop, holding up his severed, mitered head before him.

In this post we look at four depictions of the saint in different media from several areas in Mexico: 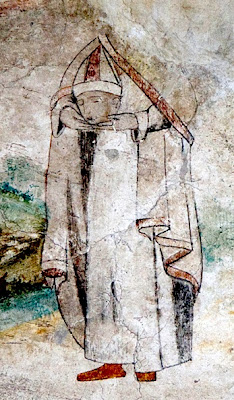 Cut from coarse black basalt, the brooding convento at Culhuacan is brightened by a series of extraordinary colorful frescoes. These illustrate classic Augustinian themes such as the Earthly Paradise and a Ship of Friars as well as numerous portrayals of Augustinian and early Christian martyrs.

Among the latter, located along a corridor on the upper cloister, is a portrait of San Dionisio. The saint, wearing red trimmed episcopal robes and red papal slippers, gingerly holds his mitered head in front of him, with the eyes closed. This simple but direct 16th century mural is among his earliest portrayals in Mexico. 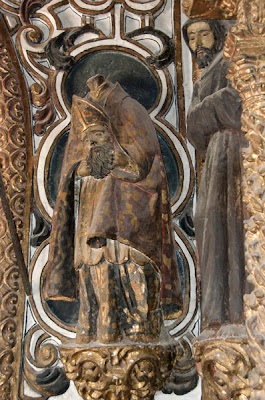 The 18th century Capilla de La Plata, an adjunct to the Dominican cult church of Tlacolula, is celebrated for its colorful stucco reliefs and popular sculpture.  Among the numerous statues are not one but two intentionally headless figures: primarily John the Baptist (right)—a popular and important saint who, despite famously losing his head, is rarely shown in this pose.

On the opposite side of the chapel entry (left), similarly posed, stands the figure of San Dionisio, clad in somber episcopal vestments, clutching his mitered and luxuriantly bearded head.

His apparently pairing with John the Baptist, may indicate his importance to the guild of silversmiths who sponsored and funded this opulent folk baroque chapel.

Also a Dominican mission, this folk baroque church is dedicated to San Dionisio, although, curiously, he does not appear among the saints in the colorful facade. 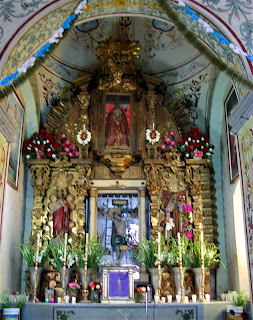 He is however the star of an opulent gilded baroque altarpiece filling the decorated apse.

The substantial gray stone front of San Dionisio Yauhquemehcan is enlivened by its whimsical spiral and zigzag columns as well as reliefs and angular statuary that includes Saints Peter, Paul and several assertive archangels with plumed helmets.
However, the stylized statue of the patron saint is barely visible, lodged high in a niche at the apex of the gable.  Like the other depictions the saint is accoutered as a bishop with heavy cape and vestments and, here, a prominent crozier.  An embossed miter sits atop the saint's disembodied head, held like the others,  with both hands over the chest.


San Dionisio also appears on the sumptuous main altarpiece, which is densely carved, gilded and replete with painted statuary. As at Ocotepec, the richly robed statue of the saint occupies a prominent location in a lighted vitrine at its center but here, unlike in the other portraits, he retains his head on his shoulders leaving his hands free to hold his crozier and gesture in benediction.

For more on the colonial churches of Oaxaca, consult our regional guidebook.

Posted by Richard Perry at 8:26 PM