Eagle warriors, or  cuacuautzin, along with the Jaguar warriors (ocelomeh) were the two leading military orders in Aztec society.  As special castes, these were made up of the bravest soldiers of noble birth as well as those who had taken the greatest number of prisoners in battle.
The "Eagle warriors were called "soldiers of the sun," for the eagle was the symbol of the sun, but their lives were one of constant battle, as increasingly the primary purpose for this continual warfare was to take prisoners to be sacrificed to their gods.
A few depictions of Eagle warriors survived the Spanish conquest: 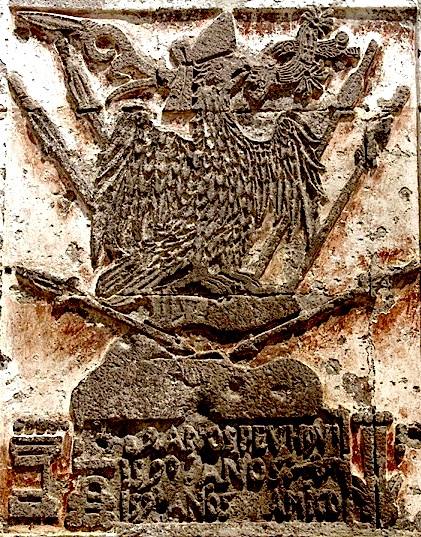 This 16th century relief sculpture of an Aztec eagle warrior is set into the tower of the great Franciscan church of Asunción Tecamachalco, in Puebla.
The eagle wears a tlatoani (ruler) headdress, or copilli, which indicates that this place was an ancient royal seat.  A complex speech scroll issuing from the eagle's beak incorporates the Aztec atl-tlachinolli glyph (fire and water = burnt water) signifying war.
In addition, a second speech scroll extending behind the eagle's head appears to have a flint on it, which, together with the surrounding panoply of spears and other weapons, further reinforces the warlike message of the relief.
Beneath the relief is an inscription in Spanish and Nahuatl bearing the dates 1589, 1590 and 1591— probably referring to the construction of the tower. 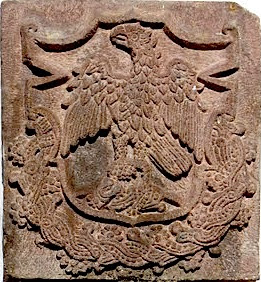 A second eagle relief is mounted in the nave wall at nearby Tepeaca, another early Franciscan foundation. Posed like the Aztec eagle, with spread wings, the bird perches atop a cactus on a stylized mound or island.
Cupped below the heraldic frame is a chain like variant of the atl-tlachinolli motif, in which the twin rivers of fire and water intertwine.

This "escudo" is one of a pair of heraldic shields adorning the facade of the Augustinian priory church of Ixmiquilpan, in the state of Hidalgo.
Aside from the heraldic frames, their content is entirely pre hispanic, without overt Spanish or Christian references.
The intricately carved relief portrays the classic features of the Aztec eagle—perched on a cactus sprouting from the rock above a lake. Again the eagle wears a plumed tlauhquechol or war bonnet and brandishes a lance or war banner.
Jaguar warriors, the counterparts of the Eagle warriors, crouch on either side with chimalli, or native war shields.
text and drawing © Richard D. Perry.  Photography Niccolo Brooker

for more on the early monasteries of Puebla and Tlaxcala see our guidebook  Mexico's Fortress Monasteries
Posted by Richard Perry at 12:32 PM