For our final post on this thread we look at some complex colonial coats of arms associated with the conquistador Hernán Cortés. 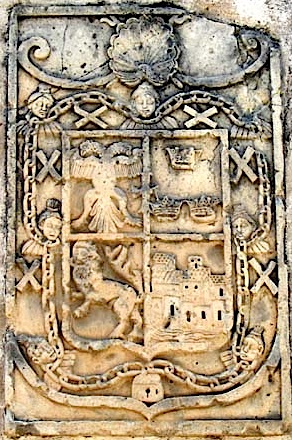 Hernán Cortés, the Spanish conqueror of Mexico has many monuments. As Lord of the Marquesado— the estate granted to him by the Spanish Crown—he established señorial residences across this vast tract that stretched from Mexico City to Oaxaca.
Powerful though he was, however, Cortés was unable to extend his domain into present day city of Oaxaca, although a mansion there popularly, but mistakenly, bears his name (see below)

The town of Cuilapan, however, located just beyond the eastern city limits near Monte Albán and famous for its rambling Dominican priory, became one of his favorite outposts.
Sections still remain of an imposing early colonial secular building facing the main plaza there. Known locally as the Casa de Cortés, it is reliably believed to be an authentic occasional residence of the conquistador rather than a native palace or tecpan. The structure is noted for its richly sculpted detail including two heraldic plaques of great interest.

The one shown above displays a unique variant of an aristocratic coat of arms.  In this escutcheon, the two-headed Hapsburg imperial eagle is reduced to a single quarter above the royal lion on the left.  Reliefs on the right represent Tenochtitlan, the ancient Aztec island capital, and above, three crowns, probably symbolizing the defeated Aztec tlatoani Montezuma, Cuauhtemoc and Cuitlahuac.
The chained heads of dead captives surrounding the inner shield are thought to symbolize the vanquished native lords of the lakeside cities around Tenochtitlan.
If this relief in fact dates from the time of Cortés, it is a unique historic and artistic monument and represents one of the earliest and most detailed sculptured escutcheons from the early colonial era.

Erroneously named for the famous conquistador of two centuries earlier, this early 18th century urban palace in the historic center is one of the few private residences from Oaxaca’s colonial era to survive largely intact.
This restored mansion is now the home of the Museum of Contemporary Art (MACO) but was originally built to house a newly married couple who united two prominent regional families.

Dramatically set against a plain green stone front, the decorative, triple tier facade reflects many of the stylistic traits familiar from Oaxaca’s baroque churches.
On the upper tier of the facade an elegant statue of the Archangel Michael gazes out from an ornate shell niche. Prominently emblazoned on either side and flanked by classical fluted columns are the armorial shields of the Pinelo and Lazo de la Vega families. Baroque flourishes adorn these family coats-of-arms, capped by the plumed helmets that traditionally signify nobility.

In the Pinelo family escudo on the left, fleurs-de-lis are quartered with pineapple or pomegranate pinnacles.  The Lazo de La Vega escutcheon on the right opposes the Five Wounds, in the form of Augustinian hearts, to the chain of the aristocratic order of the Golden Fleece.

Question:  The latter escudo features X's, or heraldic saltires, on the shield like those on the Cuilapan coat of arms. I am not sure of the meaning of these in either case, and would welcome suggestions.

For details on the colonial churches of Oaxaca consult our regional guidebook: