This dismal outlying barrio, just north east of Tultitlan, in northern Mexico City nevertheless boasts a pretty church dedicated to Saints Peter and Paul. It is also home to a number of notable carved stone crosses. 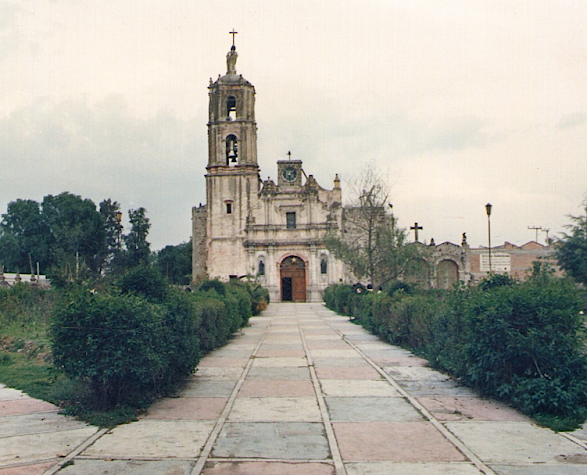 The single nave church with added south aisle dates from the mid 1600s. It is fitted with a modest retablo style facade that houses statues of the patrons Sts Peter and Paul. 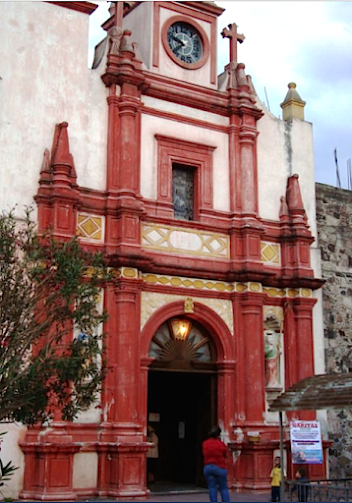 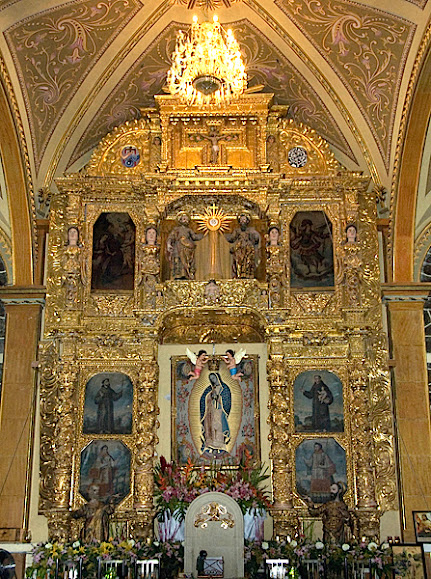 Fashioned in ornate baroque style with gilded spiral columns and estípites headed by angels' heads, the retablo showcases paintings of Franciscan saints and martyrs together with, again, statues of Peter and Paul, here flanking a monstrance in the upper section. 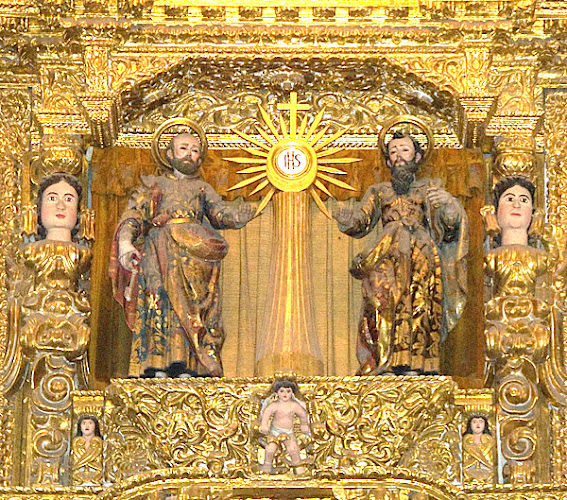 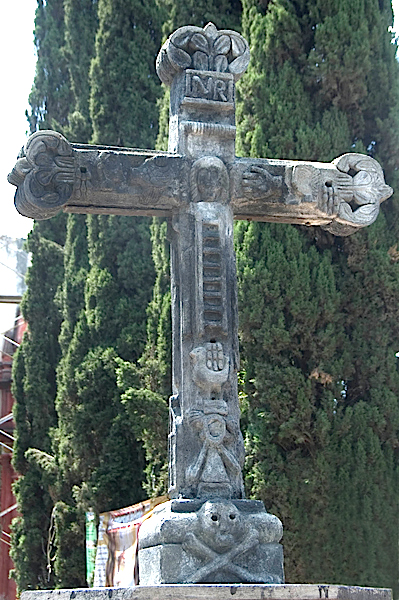 Of uncertain date, this large cross is crowded on all four sides with symbols of the Passion carved in soft relief. The dejected, puffy Face of Christ at the axis trails long locks of hair but wears no visible Crown. 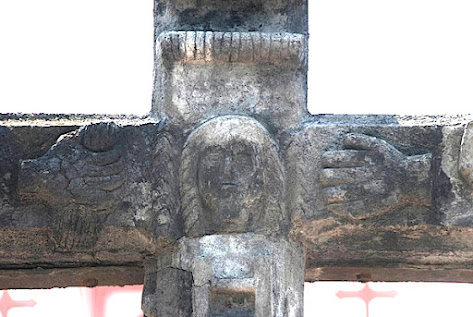 Following the pattern of many others in the area, profile heads and hands on the arms point inwards to the Face. Wounds with pierced holes and droplets of blood are squeezed in beside the finials on either side; a third Wound is inserted below the Lad- der on the main shaft. 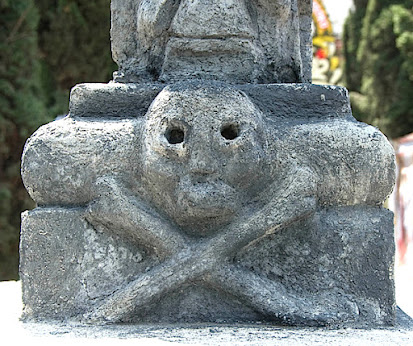 Other objects include the Rooster atop a conical Column emblazoned with Lance, Reed and a superimposed Host. A ridge of stacked Coins transects the neck below the INRI placard, and a goggle eyed Skull and Bones jut from the pedestal at the foot of the cross. 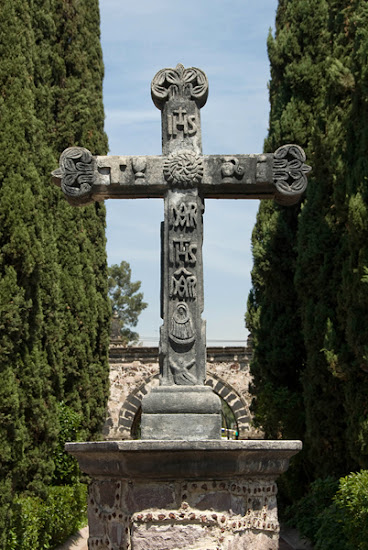 On the reverse side, a Crown at the axis stands in a column of religious monograms. Unusual reliefs include that of the Virgin, reminiscent of the Dolorosa at Acolman, above a ghost like flying angel. Bold fleur-de-lis finials with lozenge like leaves cap the arms and head. 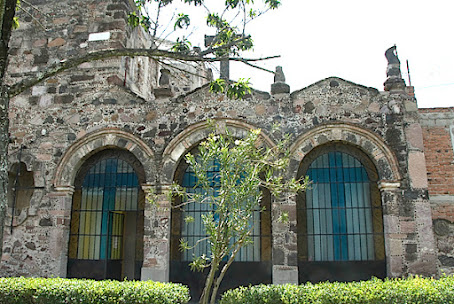 A former porteria fronts the convento. A sculpted cross, also carved with Passion symbols, stands atop its triple arcade. 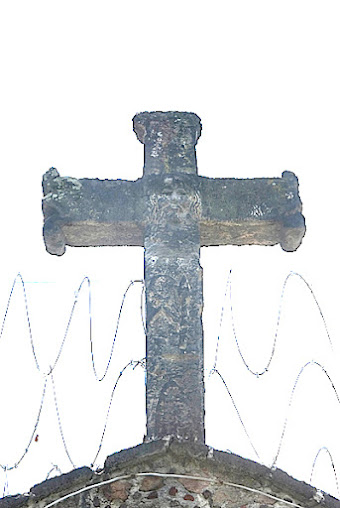 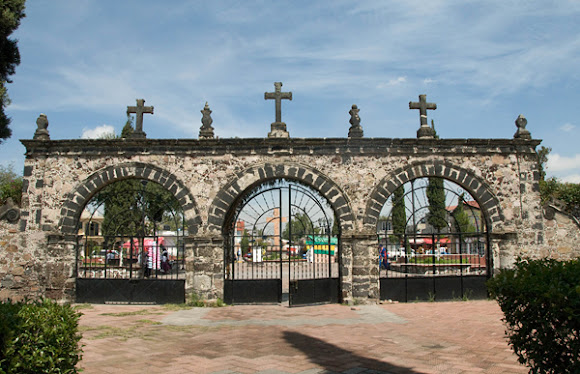 text © 2022 Richard D. Perry
images courtesy of Niccolo Brooker and ELTB
Posted by Richard Perry at 11:27 AM No comments:

Resting on the southern slopes of the volcano Popocatepetl, the former convento of Santiago Ayapango was founded by the eminent Franciscan Fr. Martín de Valencia in the mid 1500s as a visita of Tlalmanalco. 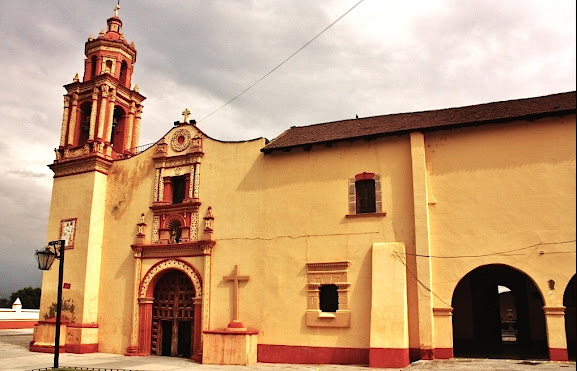 The present cruciform church rests atop the foundations of the 16th century mission here, and the front is fashioned in baroque style with construction dates from the mid 1600s to the early 1700s. 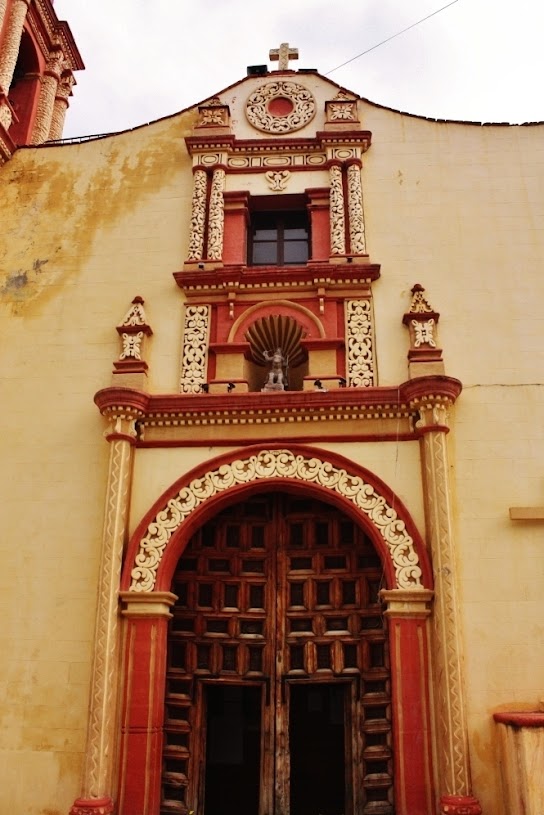 Half columns with wavy fluting frame the doorway whose arch is adorned with scrolled vegetal reliefs.
Similar reliefs in grotesque style patterns accent the features of the upper facade—the paired columns beside the choir window, a round opening in the gable and the pilasters to either side of the sculpture niche above the doorway, which contains an archaic stone statue of the patron Santiago Matamoros which may date from the early years of the mission. 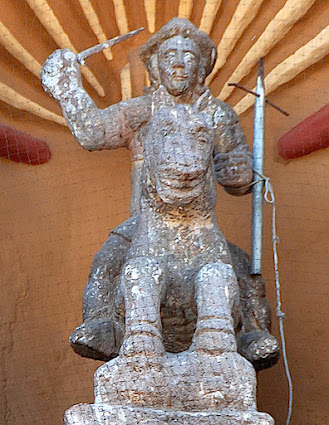 Similar reliefs also adorn the spiral Corinthian columns framing the openings of the bell tower, which is oddly emblazoned with a folkloric relief of St Barbara?: 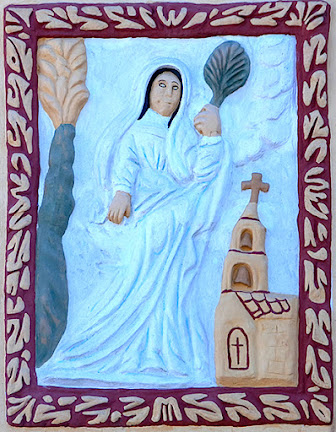 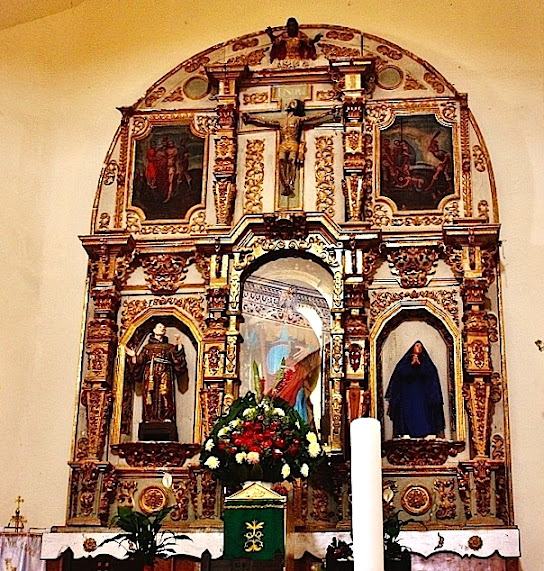 Inside the church, the main altarpiece is executed in late baroque fashion with estípite pilasters, paintings and statuary that include St Francis, Our Lady of Sorrows and the image of St James as a pilgrim (Santiago Apostol). 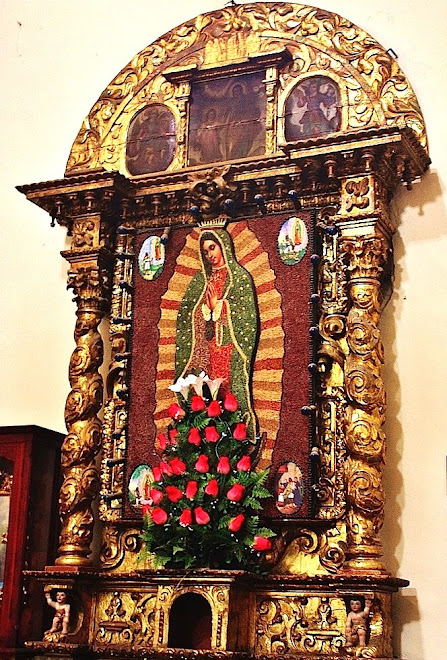 Other colonial art treasures of note inside the church include a small but gem like retablo of Guadalupe framed by gilded spiral columns; and a densely composed early18th century painting of the Redemption or Animas/Last Judgment signed by the artist Diego de Rojas. 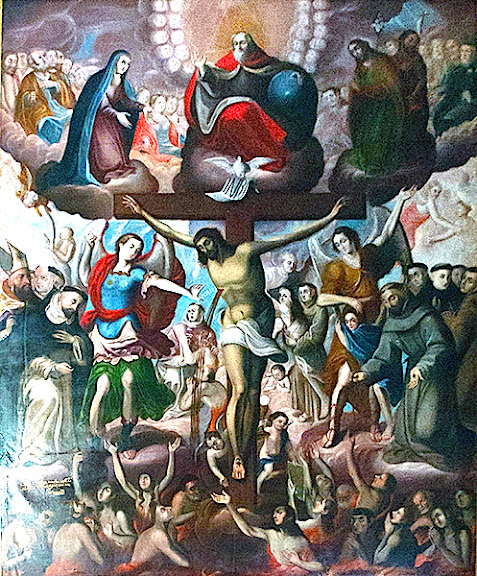 A dashing equestrian figure of Santiago Matamoros rests in the nave, to be taken out in Procession on his feast day in July. 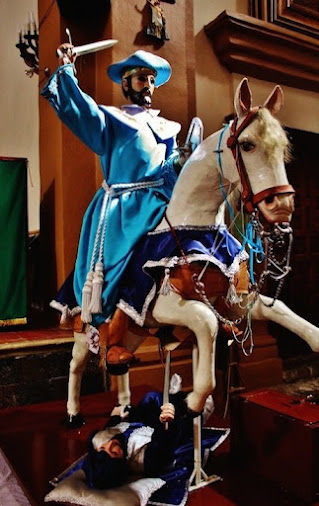 The former convento, with its well kept cloister, adjoins the south side of the church. 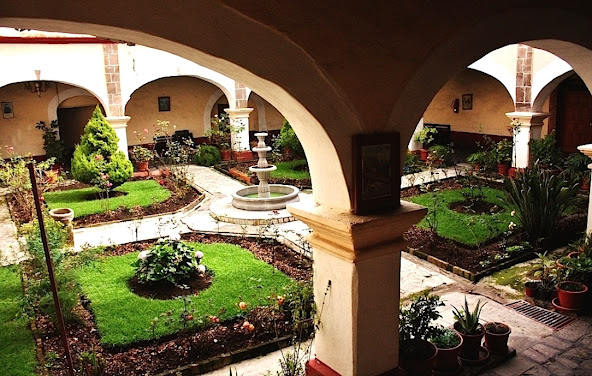 Among those canonized by Pope Francis in October 2017, were a trio of Mexican saints known as Los Niños Martires.
One of the best known episodes of the Spiritual Conquest of Mexico is that of the Niños Martires.
The story goes that shortly after the conquest, in 1527, Axotécatl, one of the Four Lords of Tlaxcala—allies of Cortés in the defeat of the Aztecs—sent his three sons to be educated in the Franciscan monastery of Tlaxcala.
On their return, the young men set about smashing idols and reproaching their father for his polygamy and excessive drinking. The enraged lord beat his son Cristóbal and had him burned him to death. The other two boys, Antonio and Juan, fled but continued their preaching and iconoclastic ways, until they too soon suffered a martyr's fate. 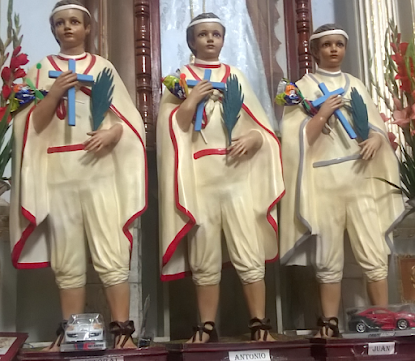 Although popular figures of the trio appear in a few Mexican churches, the martyrdom of the three only appears in two colonial era murals; initially in the porteria of the Franciscan monastery of Ozumba east of Mexico City and later in the church of Santa Maria Atlihuetzia, in the state of Tlaxcala, the location of some of the events portrayed.

At Ozumba, the boy martyrs are identified by inscriptions and are shown in a rural landscape being killed by the villagers by different methods in graphic detail. Churches in the background portray the nearby towns of Tlaxcala (l) and Tecali (r). Note the broken idol on the lower right. 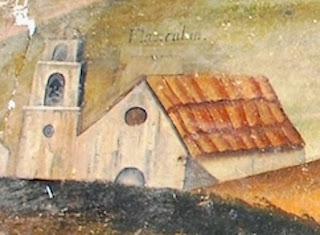 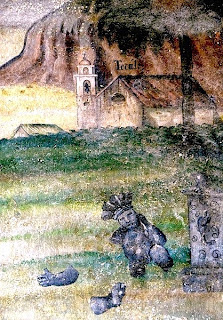 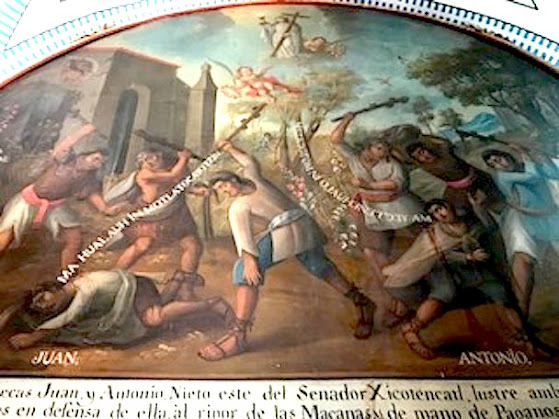 The parish church of Santa Maria Atlihuetzia is a shrine to the memory of Los Ninos Martires, as the boys are known in the pantheon of the Mexican church; their fate is recorded in a pair of dramatic, late colonial paintings with Nahuatl speech inscriptions. 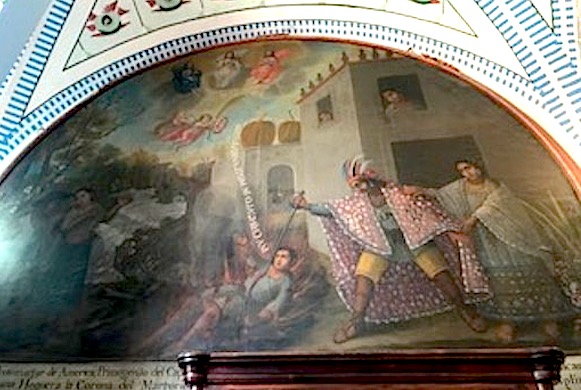