Following the depredations of the Reform and its aftermath, renewal of the interior of San Felipe Neri finally began under Archbishop Gillow in the early 1900s, at which time the church walls were given a new look in the then fashionable but now rather incongruous Art Nouveau style.
Apart from the brilliant facade, the principal attraction of the church is its collection of late baroque altarpieces, considered to be the finest in the city. Unlike many other city retablos, these were never dismantled and retain their iconographic integrity.
Currently under restoration, the screenlike "Churrigueresque" main retablo, closely fitted into the apse beneath a giant shell arch, is a virtuoso work of art. Its center section and lateral “wings” reach out to embrace the viewer, while exuberant estípite columns rise through three tiers, their ornate shafts carved with sculpted figures.
Apostles and Evangelists lean forward from sumptuous, curtained niches. Every line in the altarpiece seems multi-layered and every surface encrusted with rich ornament, adding to its depth and substance.

By contrast, the retablo of the Virgin of Guadalupe in the left transept has relatively little relief, although displaying a filigree like surface of gilded rococo forms.


Luminous paintings of the Apparitions of the Virgin of Guadalupe, recently restored and mounted in eared oval frames, are signed by the noted baroque artist José de Páez, with dates in the 1750s and 1760s. 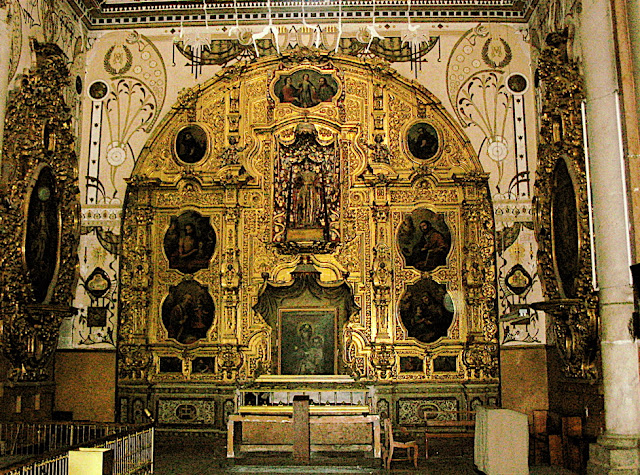 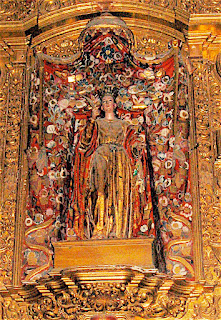 Its almost semicircular sister retablo of La Virgén del Pópolo, opposite, displays a majestic statue of the Virgin in the canopied principal niche. The lateral portraits of John the Baptist and the Holy Family—also reputedly by Páez—suggest a homely domesticity. 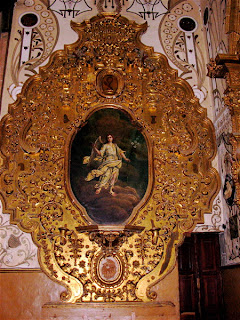 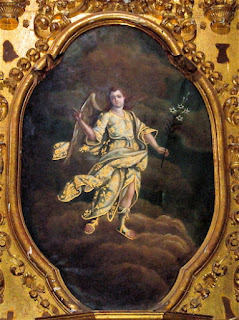 These are also attributed to Páez, an accomplished painter of archangels, whose closely related examples can be seen in the priory church of Santo Domingo de Oaxaca.
A second pair of retablos in the nave are dedicated to St. Joseph and the Immaculate Conception (La Purísima). Dating from the 1740s, they feature paintings by the Oaxacan artist Marcial de Santaella, whose work is also in the cathedral* 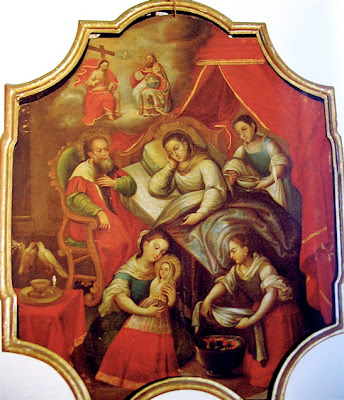 Here he favors sentimental scenes of conventionally posed figures with sweet expressions; the naive scene of the Birth of the Virgin is especially appealing.

*look for our forthcoming post on Marcial de Santaella in Oaxaca
text and photography © 2005 & 2013 Richard D. Perry (except where noted)

for more on the colonial arts of Oaxaca, consult our guidebook
Posted by Richard Perry at 3:58 PM