Arts of Oaxaca: The slave retablo of San Nicolás Ayotla

Continuing our posts on Oaxaca, today we look at a unique and historic work of art in the extreme north of the state near Teotitlan del Camino close to the Puebla border.
Some time in the 1740s, the Jesuits established the sugar hacienda of San Nicolás Ayotla in this tropical region, using slave labor.
Shortly afterwards they built a small chapel dedicated to the Virgin of the Rosary and employed one Victorino Antonio Sánchez, a carpenter and a black slave, to construct the main altarpiece for the chapel, which mostly served the mulatto community of the hacienda.
According to the agreement, Sánchez was paid between 300 and 500 pesos for his work, of which 100 pesos was returned to the Jesuits to buy the freedom of his son. 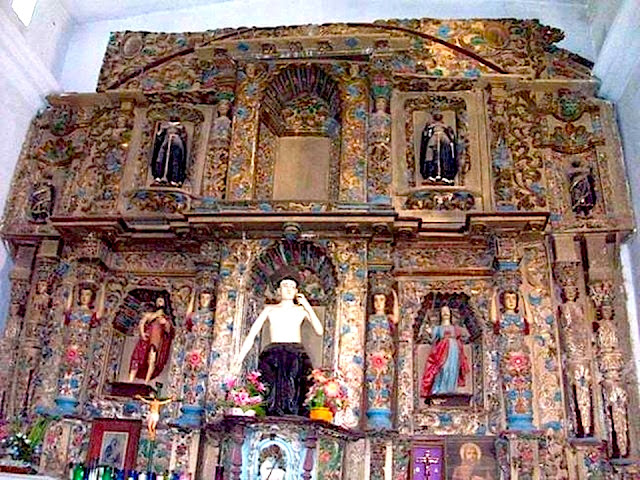 The Altarpiece
The compartmented retablo is fashioned in popular 18th century style and owes many details to the Oaxacan baroque, with decorative sculpture niches, projecting cornices with pendants and dense filigree ornament.
Instead of the gilded spiral columns more common in the region, Sánchez opted for painted ornamental atlantes and caryatids as framing supports.*
However, it is the iconography of the altarpiece that is of special significance. The principal image, in the center niche, is a kneeling, penitential statue of Nicholas of Tolentino, the patron saint of the hacienda and a commonly portrayed saint in Oaxaca. (the flanking figures of Saints John the Baptist and John the Evangelist are later additions.) 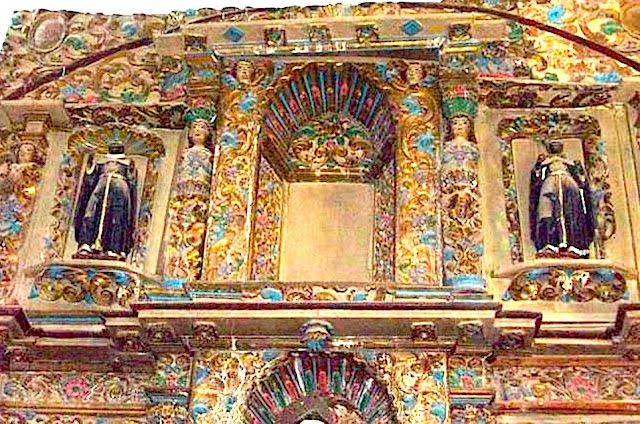 But it is the four statues in the upper level that are of unusual interest, portraying saints of special meaning to the black community.
The two principal figures flanking the empty center niche, both dressed in Franciscan habits and with arms crossed on their breasts,  represent San Martín de Porres and San Benito de Palermo, aka Benedict the Moor, both well known saints of African origin and the patrons of black cofradías.
Although the identity of the smaller, outer figures is less certain, one is believed to portray San Pedro Claver (Peter Claver), a Jesuit who evangelized and ministered to various African enclaves in the New World. Alternatively they might represent the more traditional Ethiopian saints, Ephigenia and Elesban.
Sadly for Sánchez, the Jesuits were summarily expelled from Mexico in 1767 and the promise of freedom for his son was delayed until after his death. But the altarpiece is his memorial, the only major work of art known to have been created by a black slave in Mexico—a forbidden practice in colonial times. 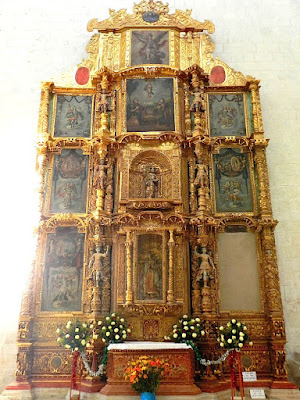 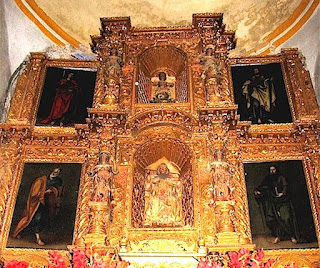 * Other examples of this style of framing in the Mixteca Alta are found in the altarpiece of the archangels at Yanhuitlan and the main altarpiece of San Mateo Yucucui, near Yanhuitlan.
There are variants in retablos at Capulalpan and San Miguel del Valle elsewhere in Oaxaca (below). 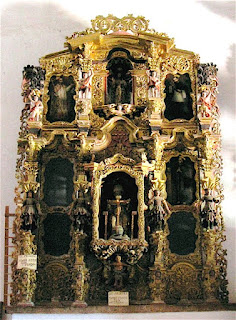 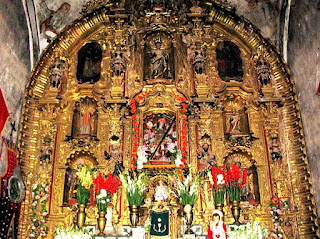 text © 2016 Richard D. Perry
based on information and images from researcher José Arturo Motta and Luis Huidobro, the restorer of this altarpiece and others in the Mixteca Alta region of Oaxaca.
.............

Planning a trip to Oaxaca? Take our guidebook along.
Posted by Richard Perry at 1:13 PM