Don Manuel Fernández Fiallo Boralla was a native of the town of Serpa located in the Kingdom of Portugal.  His parents, Francisco Fernández Fiallo and Mary Boralla, were wealthy landowners who acquired titles of nobility in Portugal as well as from the King of Spain which passed on to their son.
Manuel attained the rank of Captain in the Army of the Crown, in whose service he was captured by Saracens and spent time imprisoned in north Africa, where he provided guidance and moral support to other prisoners.
In 1665, Fiallo arrive in Oaxaca where he invested in the booming cochineal trade and greatly increased his fortune.  No stranger to suffering, he was struck by the poverty in the Valley of Oaxaca and undertook to provide support and sustenance for the destitute orphans of the region.
In the city of Oaxaca, Antequera as it was then known, he supported the construction of public markets and granaries, communal workshops and even improved prison facilities as well as rebuilding the palacio municipal.
A profoundly religious man, he also participated in a numerous charitable activities through the Catholic church, most notably in funding the construction of several important city churches including San Agustín, La Merced, the first Temple of San Francisco, the convent of El Carmen and the Belem Hospital as well as the church of San Juan de Dios.
In addition he founded and reputedly aided in the design and construction of the chapel of El Marquesado where his statue now rests.

Despite his great wealth and property, Fiallo lived modestly, eschewing luxuries and unnecessary expenses. He dressed without ostentation and it is said that for over thirty years he slept on a bed of rough cowhide with a log for a pillow. He lived in a modest house on Eighth Street and Hidalgo and passed away on May 28, 1708.  His biographers claimed he had a gentle and even naive character, but his first interest in helping others was to look to their most basic needs.
With the death of Don Manuel, the poor and indigenous people of the city and Valley of Oaxaca lost a great benefactor, many of whom participated in his funeral at the Jesuit church of La Compañía where his body was buried. 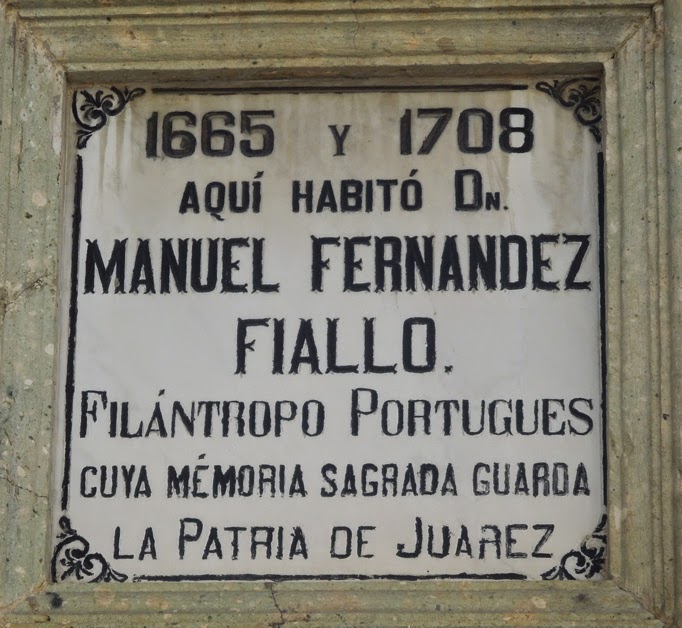 176 years after his death, on August 31, 1884 , the Municipal Council of the city of Oaxaca agreed to name one of the main city streets in honor of this distinguished citizen.
A marble plaque has been placed on the wall of his house, number 49 Hidalgo St, inscribed with the following, "Between 1665 and 1708, here dwelt Don Manuel Fernández Fiallo, Portuguese philanthropist, whose sacred memory is preserved in the homeland of Juarez."

Posted by Richard Perry at 8:56 AM