In an earlier post we looked at the folk baroque church front of Santa Maria Jolalpan.  Here we show its less well known sister church of Santa Ana Jolalpan.

Santa Ana Jolalpan
Recently under repair and restoration after many years of neglect and deterioration, the ornate, polychrome front of this barrio church, although obviously much influenced by nearby Santa Maria Jolalpan, offers several original aspects. 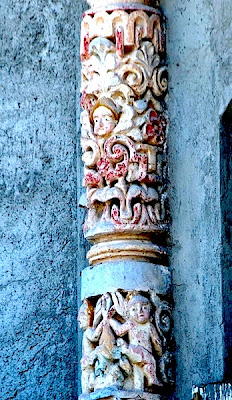 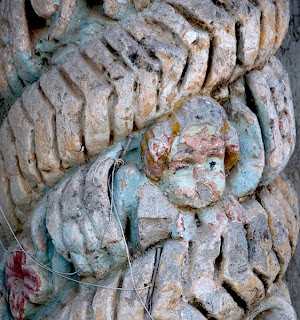 Spiral and baluster columns frame the triple stage "retablo" facade, some woven with grapevines and others encrusted with painted foliage and angels' heads.
Most of the sculpture niches are empty, except for the draped statues of Saints Peter and Paul on either side of the doorway. But several other less common figures appear on the church front; these include the life size reliefs of David and Solomon flanking the choir window, and atlantean statues of Adam and Eve holding cornucopias on the upper level.
Reliefs depicting angels bearing a crown surround a statue of the Virgin of Guadalupe in the top niche, while the Holy Trinity is portrayed in the serpentine surmounting gable, flanked by two squat statues of bearded saints.
The sculptural artistry evident in the stucco work of the facade also extend to the stone baptismal font inside the church.