In the extreme western part of the state of Puebla and extending north into present day Morelos we find an extraordinary cluster of ornate "folk baroque" churches, whose dazzling facades are exuberantly ornamented with a riot of sculpted and painted stucco relief.
The most southerly of the group is Santa Maria Jolalpan and its lesser known sister church of Santa Ana—both in Puebla. Their "retablo" facades display an inspired variety of richly decorated pilasters and columns: neo-Plateresque with basketweave decoration; bulbous estípites with caryatids; entwined Solomonic shafts—even neo-Egyptian!.   In this first post I look at the better known of the two: the principal church of Santa María Jolalpan. 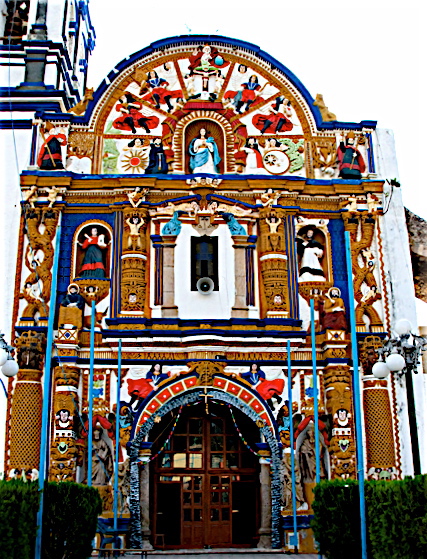 Santa Maria Jolalpan
The Santa Maria church front is brilliantly colored, its stucco reliefs sparkling in eye-catching shades of blue, burgundy and yellow ocher, although the hues often change with periodic repainting. Divided "retablo" style into horizontal and vertical tiers, the facade is capped by an overarching, semicircular pediment. 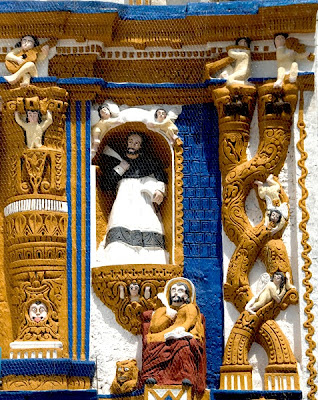 One striking element is the use of twisted pilasters on the middle tier, adorned with cherubs and sinuous relief foliage.
Abundant statuary and carved stucco figures relate biblical events to the history and hierarchy of the Catholic Church, its founding fathers and saints: Adam and Eve are found here, together with the Doctors of the Church, the Four Evangelists, and other leading Apostles as well as the founders of the religious Orders.

The wheel like, crowning pediment is busily carved with a complex iconography. The blue-robed image of the Virgin Mary is displayed in the center niche, framed by rays of the sun and drapes held aside by a kneeling St. Francis and St. Dominic, the founders of the missionary orders. 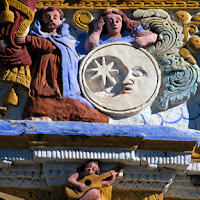 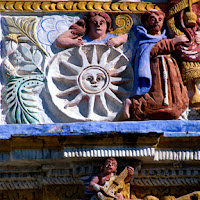 The two saints are flanked by  busts of Adam, with the sun, and Eve, with the moon/star, accompanied by prominent speech or song scrolls.  A joyous orchestra of musical angels processes along the cornice below the pediment, playing trumpets, guitars and viols. 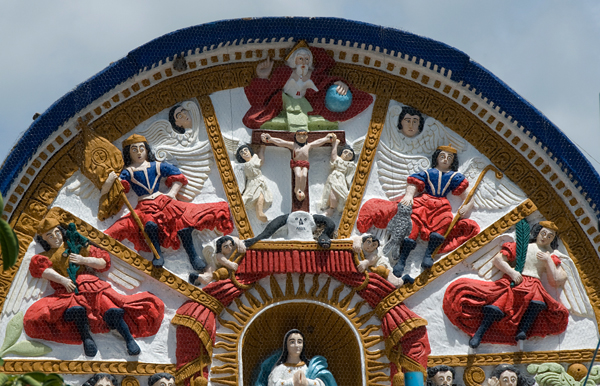 Radiating around the gable are four outsize archangels with windblown skirts, bearing their traditional attributes. At the apex is an unusual tableau of the Trinity that features a relief of Christ Crucified with serpent and snowman like skull.
The colors of the facade change from time to time during repainting—adding an element of local creative imagination.