Angahuan lies at the heart of the Tarascan hill country and, like the surrounding lava fields, is predominantly charcoal-colored, looking more like a Welsh mining town than a village in Mexico.
The streets are cobbled with basalt blocks and the distinctive local houses, known as trojes, are built of stout pine logs with steeply-pitched shingle roofs and covered verandas.

In contrast to these gray surroundings, the women of the village wear brightly colored satins, usually with woollen rebozos or shawls to keep out the highland chill.

The mission town was founded in the 1540s by the aristocratic Dane Fray Jácobo Daciano, who is buried in nearby Tarecuato. Construction of the mission, with its adjacent hospital and chapel, followed soon afterwards. 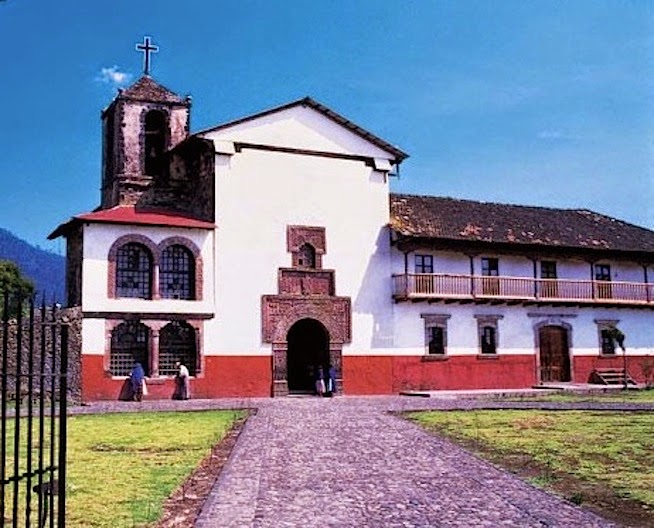 The church faces a large atrium in which stands an old stone cross, and the 16th century guatápera hospital and chapel still stand near the church, across a street that now bisects the atrium. 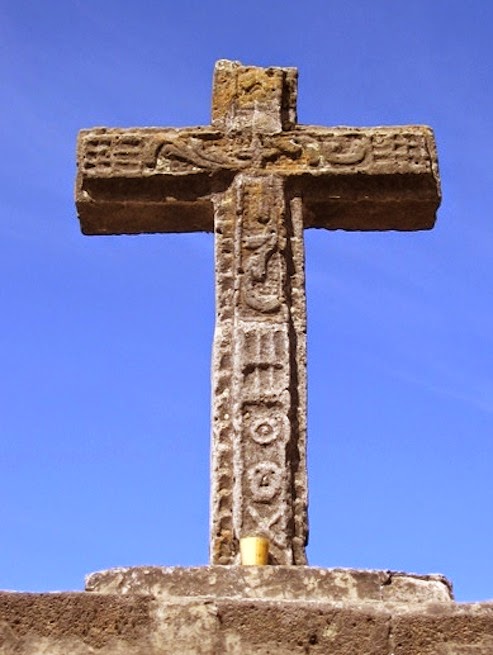 Probably dating from the 16th century, this unique, battered cross, elevated on a high masonry base in front of the church, features a unique combination of not fully decipherable reliefs, strikingly reminiscent of ancient Tarascan glyphs and undoubtedly carved by a native artisan.
Rectangular in section, the cross has a broken off head and lacks finials. However, what remains features an unusual, projecting “cross within a cross” design, whose notched outer borders may represent corn plants.
From the four-petaled cross motif at the axis, stylized, almost geometrical reliefs of grape vines extend propeller like in all four directions. Curious checkerboard panels at the ends of the arms and in mid-shaft may signify highly abstracted Christ's wounds.
The simplified skull and bones on the lower shaft are arranged in a tic-tac-toe pattern between circles.
The Church of Santiago
Flanked by an open chapel and convento, the church of Santiago is distinguished by its extraordinary mudéjar facade—one of the most archaic in Mexico.
Hewn from reddish black basalt and dramatically set against the whitewashed west front, the geometrical facade rises in three stages, each framed by a projecting alfiz. It is densely sculpted with reliefs similar to those of the Guatapera chapel doorway in Uruapan, and although it may lack the sculptural finesse of Uruapan, the Angahuan facade is vigorously detailed in sharply undercut tequitqui relief.
Foliated grotesques, gripped by several angels, swirl about the tasseled Franciscan cord carved on the doorjambs. The medallions on the bases and capitals are also framed by twisted cords with penitential knouts, while others with cherubs and floral motifs fill the beaded alfiz overhead.

An archaic Latin inscription above the densely carved archway proclaims St. James the Apostle (Santiago Apostol) as the patron of the church, probably in honor of his namesake, Fray Jácobo (James) Daciano:  "SANCTO JACOVO APOSTOL MAYOR"
Perhaps because of this connection, the primitive attic relief depicts the saint as a humble, barefoot pilgrim instead of the sword-wielding horseman of his more common alter ego, Santiago Matamoros (St. James the Moor-slayer).
Paradoxically, especially for a church dedicated to St. James the Apostle, whose principal attribute was the pilgrim's scallop or cockleshell, the Angahuan facade displays none of the scallop shell reliefs so common among other 16th century churches in Michoacán. The triangular crowning pediment is a later addition.
The Interior
The interior of the church looks as archaic as the exterior. Although a modern, wooden barrel vault has replaced the old hipped roof, most of the 16th century wooden frieze is still in place along the roofline.

A long, partially deciphered inscription, in a condensed style like that of the facade and marked with the date 1557, runs along the entire roofline, again invoking St. James as protector of the village.
Although it features no narrative images like other Michoacán ceilings, the artesonado ceiling above the main altar is another intriguing mudéjar survival.
Shaped like a truncated pyramid, its four sloping sides (faldones) are divided by carved ribbon cornices, cords and ornamental scrolled beam ends. Each panel contains Franciscan insignia or religious monograms composed of intricate strapwork painted red, brown and gold.
Framed by winged cherubs in each corner, the complex center panel, or almizate, features the papal tiara linked by banderoles
to four spiky crowns of thorns—evoking the theme of Christ's Passion as well as the Franciscan emblem of the Stigmata.

A baroque retablo in provincial style stands in the apse, framed by estípite columns and a scrolled pediment, upon which rest several modern santos, notably an equestrian figure of the more militant Santiago Matamoros. 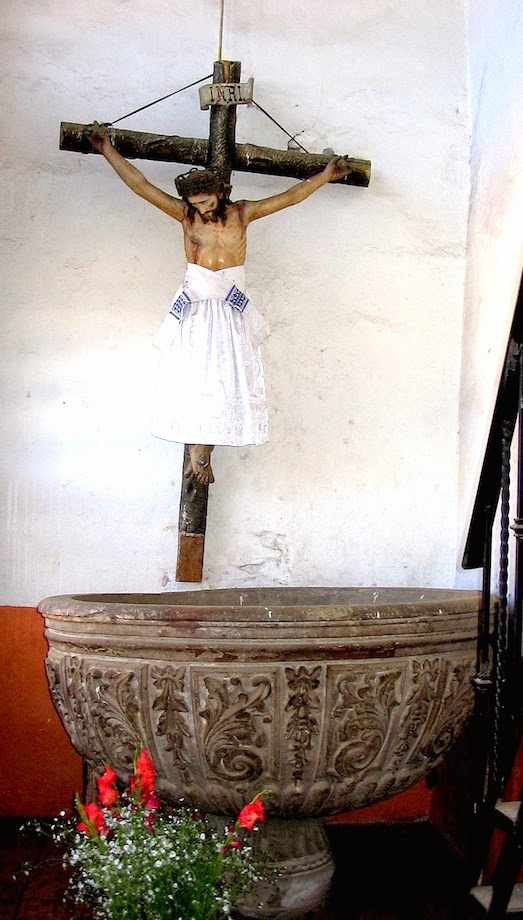 A striking group of wooden cristos de caña in the naturalistic Patzcuaro style creates a powerful impression on the visitor.
The most expressive of these scarred figures hangs above a great carved stone font in the baptistry, which may have functioned as the open chapel in former times.

The Open Chapel
An integral part of the original mission, the raised open chapel was attached to the north side of the church. The ornamental upper colonnade, originally used as a preaching gallery, is divided by a bulbous column, and the similarly divided lower opening is now spanned by stone corbels.  The squat bell tower is a later addition.
The two story convento on the south side of the church features an exterior balcony with Tarascan style wooden balustrades and
overhanging eaves. Similar rustic galleries face three sides of the interior patio.

For a recent compilation of images of the people and churches of the region, including several mentioned in our posts, check out the video by Quin Matthews, who accompanied the author on one of his journeys through Michoacán.

text © 2015 Richard D. Perry.  images by the author except where noted
Posted by Richard Perry at 5:22 PM