Missions of Michoacán. Zacán: the Church

From Quinceo we turn to the remarkable mission of Zacán,  a classic, early Augustinian mission/hospital complex, located in the shadow of the Paricutín volcano in the western highlands, or sierra tarasca of western Michoacán (extreme left on the map).
This is the first of two posts: the first deals with the main church of San Pedro, the second with the painted guatápera chapel.


San Pedro Zacán
An imposing building with a sculpted facade, the venerable main church of San Pedro stands in the center of the village, facing a large walled atrium with a carved stone cross. 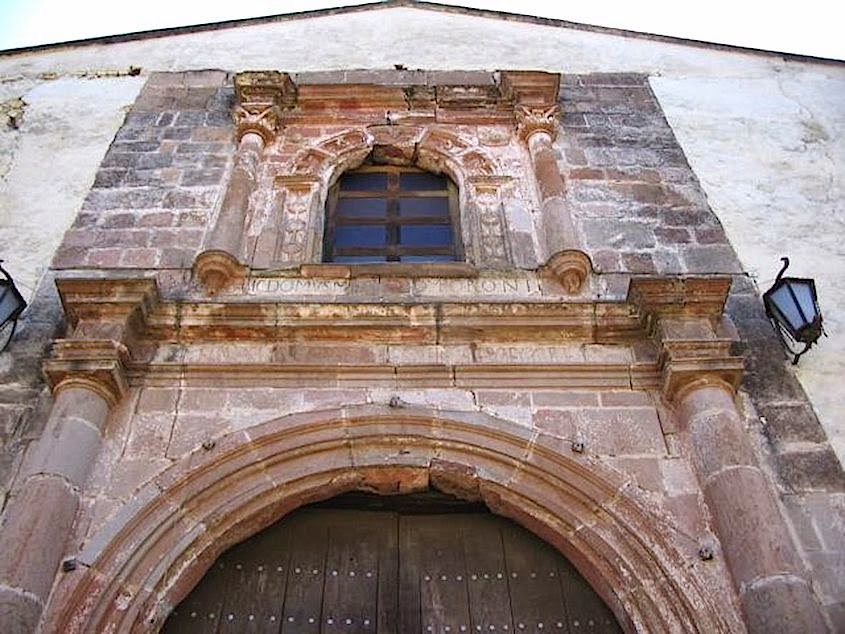 Distinguished by its sober, classical portal and handsome coffered choir window, the facade is reminiscent of the Augustinian priory in Morelia, although the long Latin inscription above the doorway is dated 1560, predating that city church.
An additional legend, Mine is the House of God, is emblazoned below the choir window. 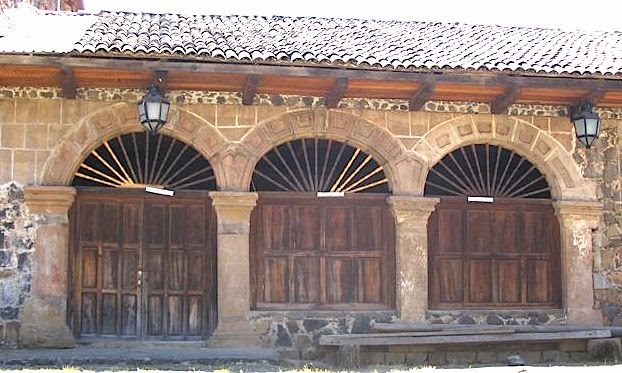 The adjacent convento is fronted by an elegant portería in the form of a triple arcade, also with coffered arches. The separate stubby tower, with its rosette studded belfry arches is thought to be contemporary with the church—a rare 16th century survival. 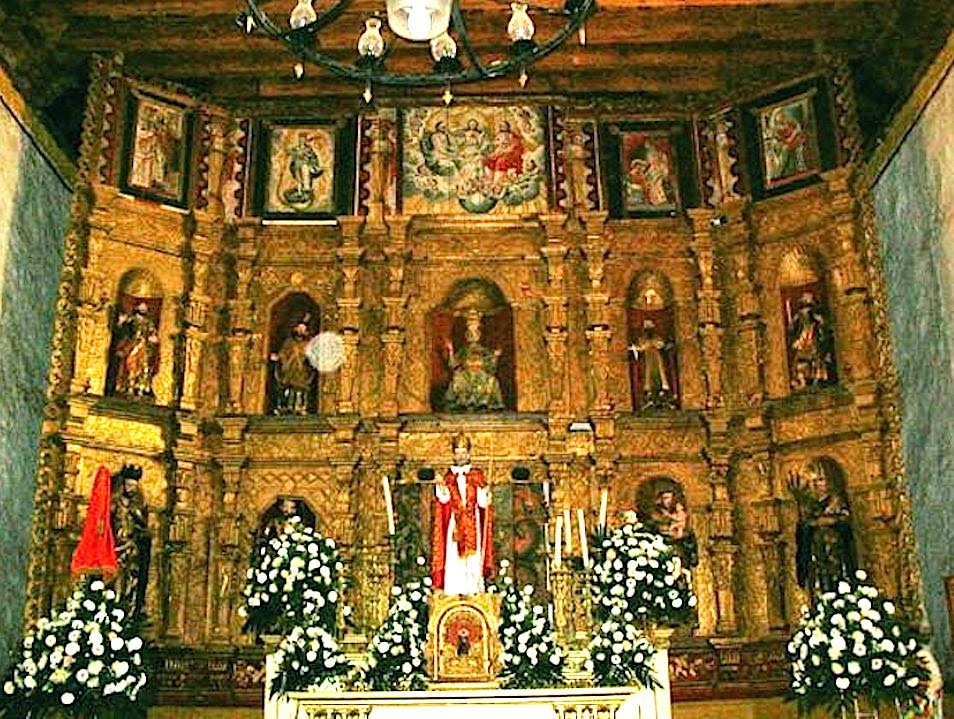 Inside, as our eyes become accustomed to the darkened nave, the carved brackets and spiral moldings of the beamed wooden ceiling come into view. A broad, screen like main altarpiece spans the east end of the church, its lateral wings projecting at an angle.

Framed and gilded in a provincial, late 18th century Churrigueresque manner with estípite columns, it showcases in the numerous niches statues of baroque saints, elegant in their black and gilt estofado finery, including a crowned St. Joseph, and the patron St. Peter wearing the papal tiara. 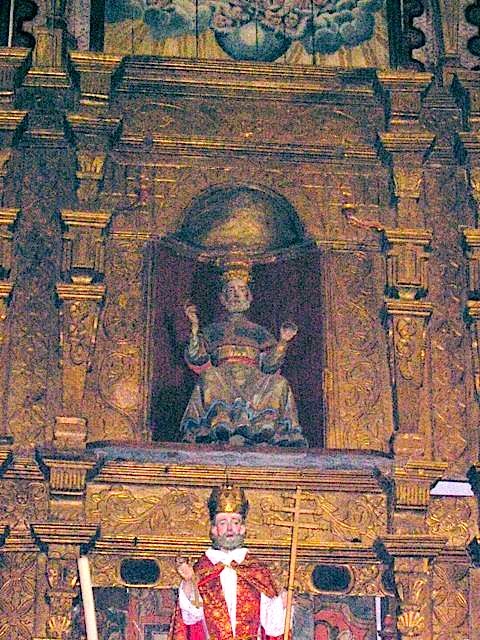 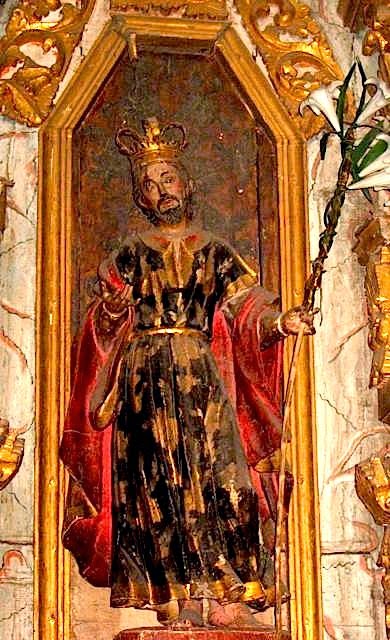 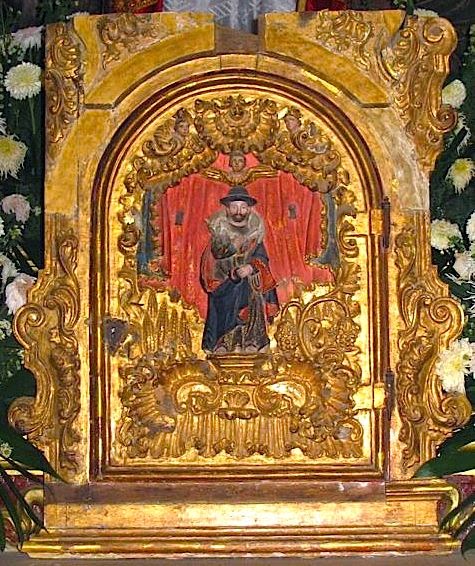 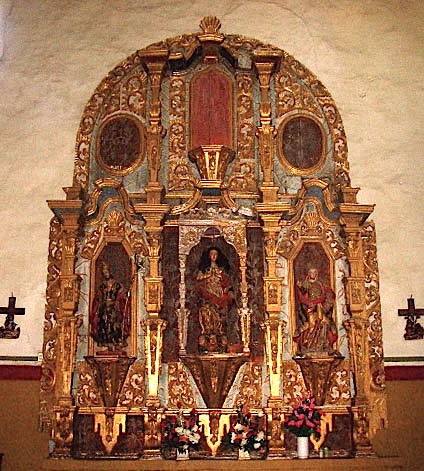 The nave glows with other gilded altarpieces in decorative late baroque style, and there is a group of ornamented processional crosses. 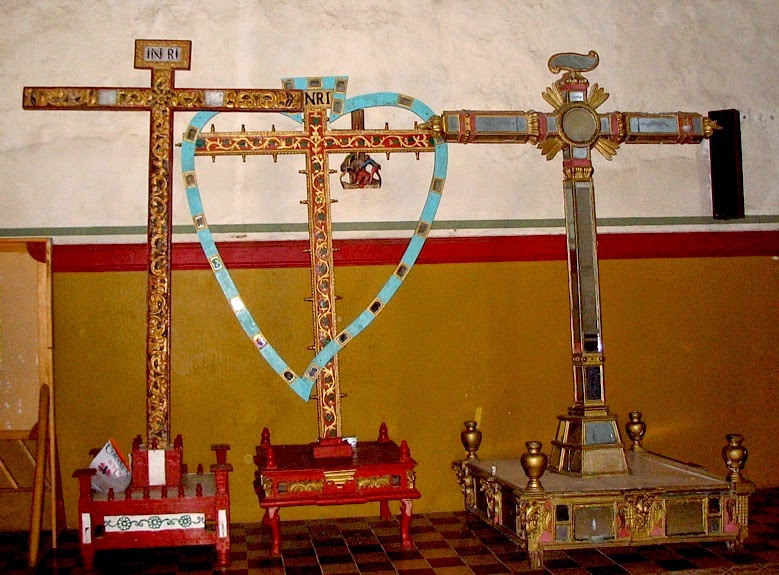 The Atrium Cross
The tall, octagonal stone cross stands in front of church, mounted high on a stepped base beside the atrium wall.
Worn in some parts, the cross faces away from the church front and has some ambivalent features. A rectangular plaque with serrated bands covers the crossing. Possibly representing the verónica, it frames what seems to be a highly stylized crown of thorns with raised pearls and zigzag motifs.   Eroded reliefs representing bleeding wounds on the arms and lower shaft are the only other identifiable Passion symbols, although there is a scatter of drilled holes on the shaft.
Ornamental finials in the form of feathery foliage spread out from cord moldings at the ends of the arms and the head of the cross. In another intriguing detail, petaled rosettes decorate the ends of the finials, each embossed with a skull like mask at the center.  The back of the cross is otherwise plain. 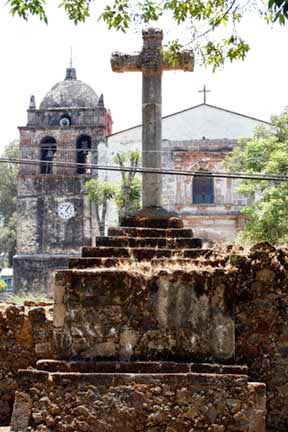 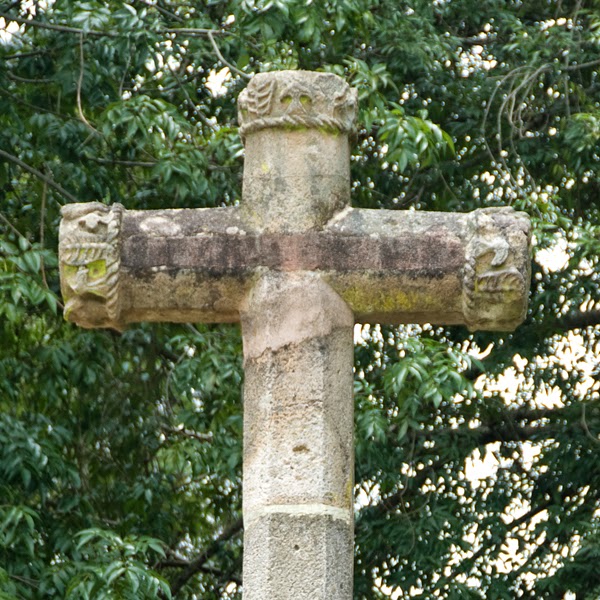