San Miguel Pomacuarán
Pomacuarán is noted for its numerous, colorful festivals, notably on September 29, the feast day of its patron saint, the Archangel Michael, when residents decorate the church with elaborate floral displays and villagers from distant parts as far as the US enjoy the celebrations, with music, masquerades and fireworks. 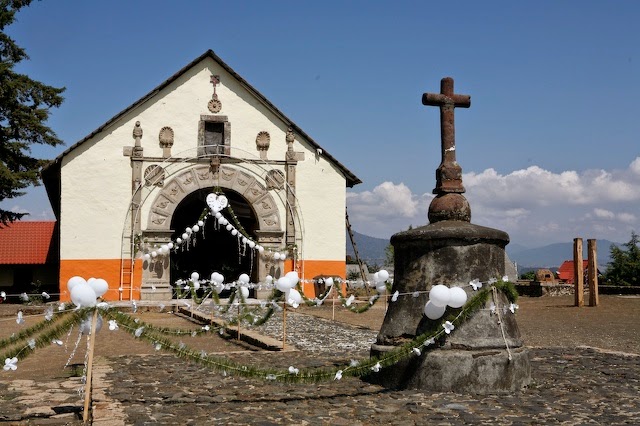 In the mid-1800s a fire devastated the old mission church here. Although the church was abandoned, demolished and later rebuilt, its broad 16th century carved stone doorway was saved and re-assembled to create a new entry for the adjacent hospital chapel. 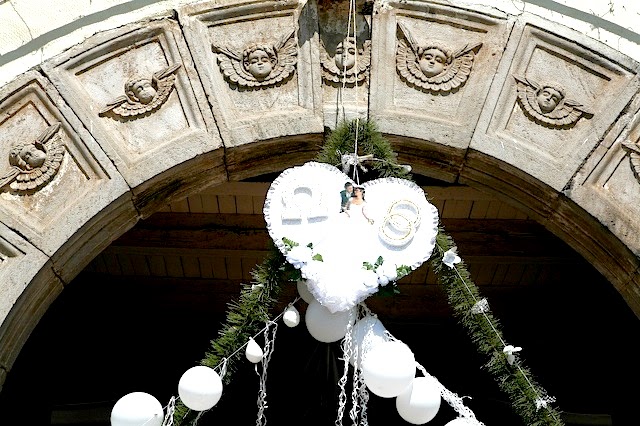 Boldly carved in a style similar to nearby Capácuaro, rosettes, angel’s heads and oak like foliage ornament the doorframe, together with prominent inverted scallop shells—a popular motif found on numerous church and chapel fronts in the region. 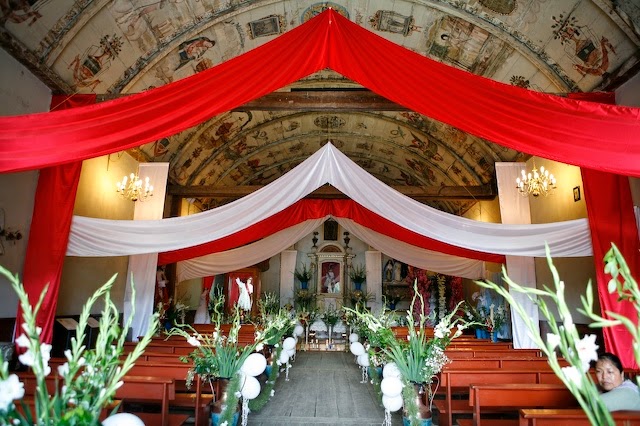 Inside the chapel—one of the few in the region, including Tupataro, to retain its original, sectional wooden floor—the principal work art of art is its suspended, polychrome ceiling, one of the most complete and best preserved in Michoacán.
Probably executed following the fire, after the re-roofing of the chapel, the arched wooden ceiling runs the entire length of the chapel, from the polygonal apse to the choir at the west end. It is divided into 13 slender bays separated by ribs adorned with floral fringes.
The ornate painted panels are still largely intact and are thematically divided into two groups:  the four easterly bays (nearest the altar) portray angels in blue and red swirling robes, eight in all and identically posed, holding up scrolls inscribed with the eight Beatitudes in Spanish, taken from the Sermon on the Mount—the only example of this theme found in the Michoacán ceilings:
The more numerous western panels portray assorted saints, archangels and a variety of biblical episodes, familiar and obscure, on either side and in no discernible sequence (see plan below).
These are interposed with decorative sunbursts, floral urns and ornamental cartouches. 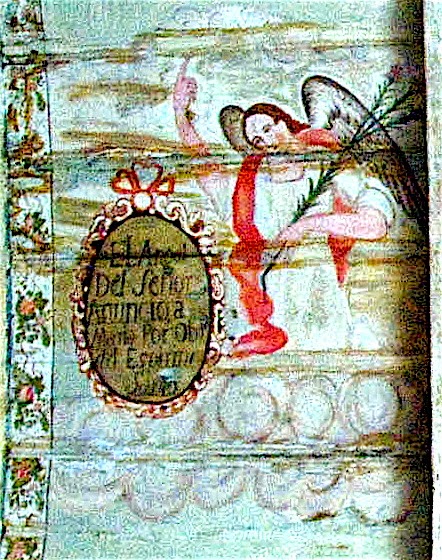 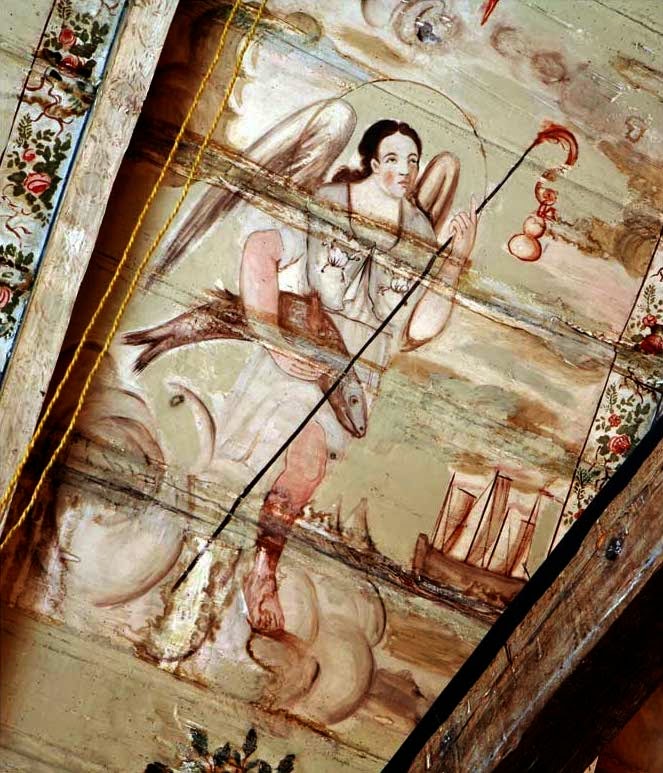 As might be expected, there are several scenes from the life of the Virgin, notably the Annunciation and the Nativity.  Other dramatis personae include a bemused St. Raphael with minimal wings and a fearsome fish, and a militant Archangel Michael, the titular saint of the chapel, vigorously spearing a winged demon. 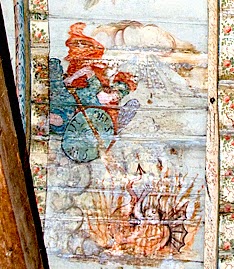 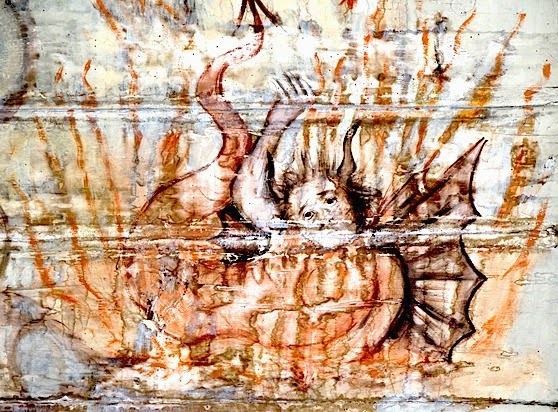 In common with the other Michoacán ceilings, the paintings are predominantly colored in brilliant reds and blues, and executed in a vivid popular style with many anecdotal details. 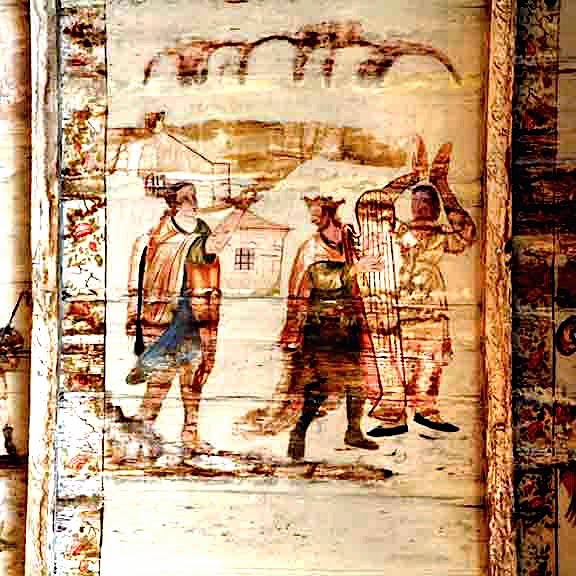 Two tableaux at the choir end show period musical instruments: first, King David plucks his harp, accompanied by figures with cymbals and a horn; and there is a detailed portrayal of a baroque pipe organ being played by two angels—one with sheet music. 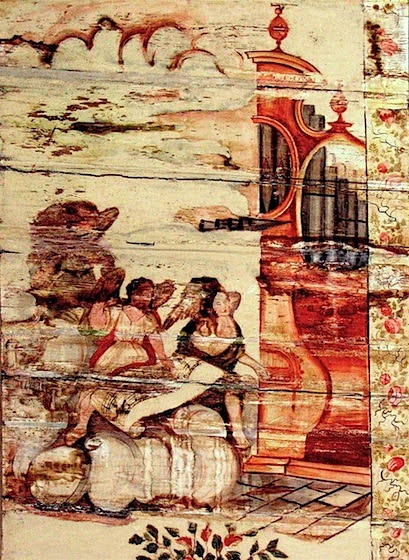 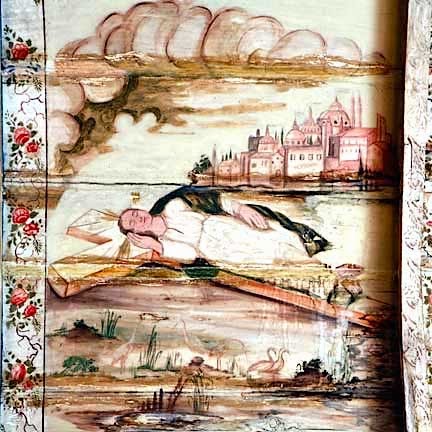 Another unusual panel portrays Saint Helena, empress mother of Constantine, and her Dream of the True Cross. It shows her asleep on the cross with what appears to be a man below excavating the cross that was buried in Jerusalem, as in her vision.
The church of the Holy Sepulcher, which was built on the site, is in the background. 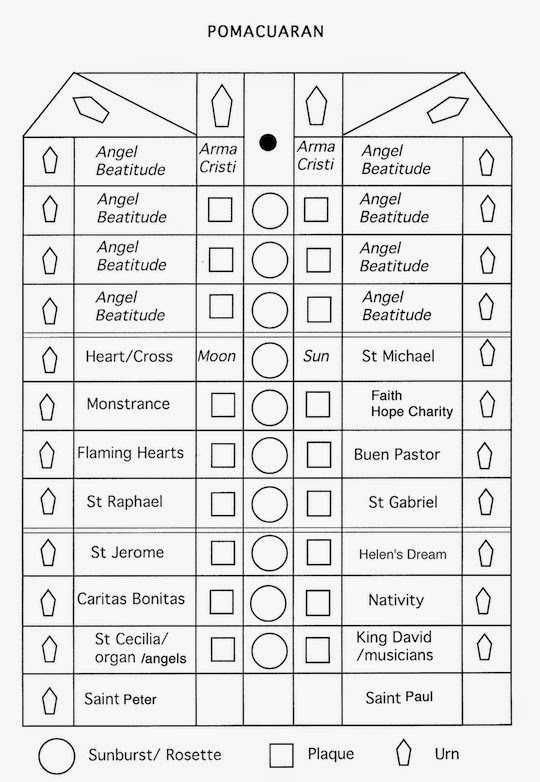 text and graphic © 2014 Richard D. Perry
color images by the author and courtesy of Carolyn Brown and Niccolò Brooker
Posted by Richard Perry at 5:32 PM