Missions of Michoacán. Nurio: The Chapel 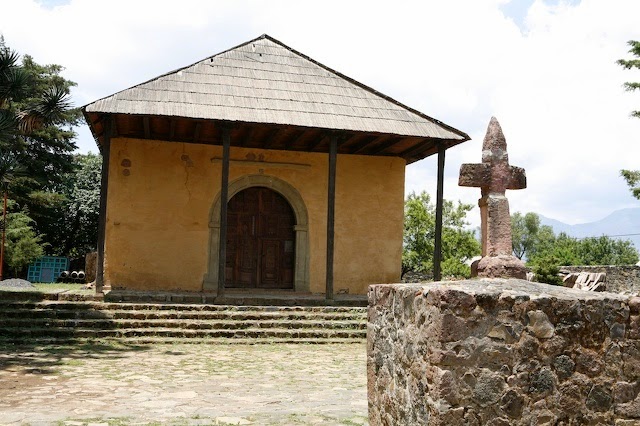 Nurio:  The Guatápera Chapel
From the church of Santiago we turn to the little adobe chapel of La Inmaculada—Our Lady of the Immaculate Conception—found inside the gated guatápera compound behind the main church.
Its humble facade retains the original stone doorframe and is ornamented with rustic reliefs of the sun and moon—traditional symbols of the Virgin Mary. A stone cross with a pointed head like the church atrium cross stands on a large, square base opposite the chapel door. 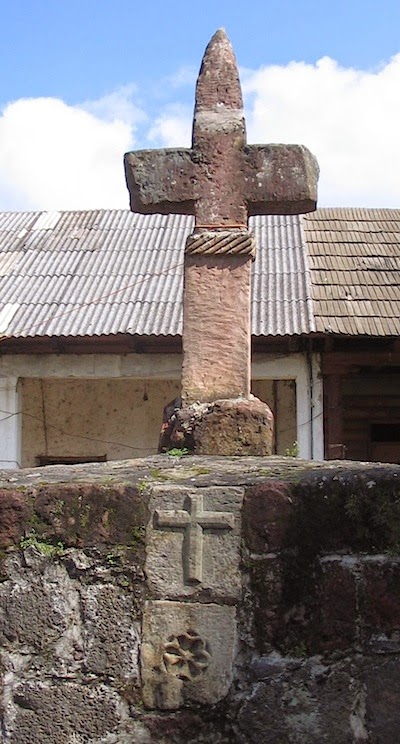 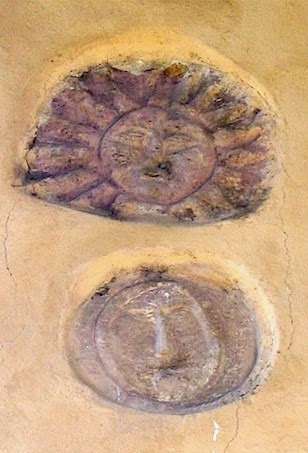 In dramatic contrast to its plain exterior, the chapel interior is a carnival of color. Like Tupataro, it retains its sectional wooden floor dating from colonial times.

An almost semicircular artesonado ceiling of pinewood beam and board spans the entire chapel, divided into eleven bays and closed at either end by a fan like tympanum—a monumental structure attributed to master carpenter José Chanaqua.

Dated by an inscription to 1803, this ceiling is painted in its entirety with dozens of polychrome panels attributed to the local artist José Gregorio Cervantes.
Painted predominantly in reds and blues with some complementary earth colors, the panels are ornamented in a popular rococo style, replete with floral festoons. 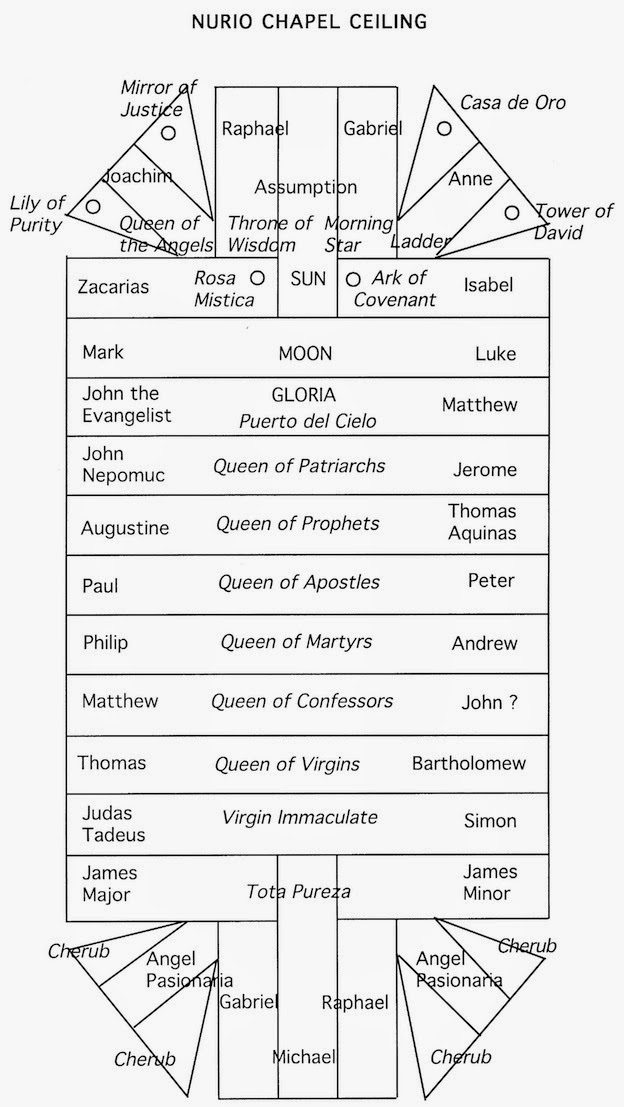 The Iconography
Despite its modest scale, the subject matter of the ceiling is among the most complex and varied in Michoacán.
In accordance with the dedication of the chapel to the Virgin Mary, the motifs at the apex of each bay along the nave link selected images from the Litany of the Rosary, framed by garlanded medallions. 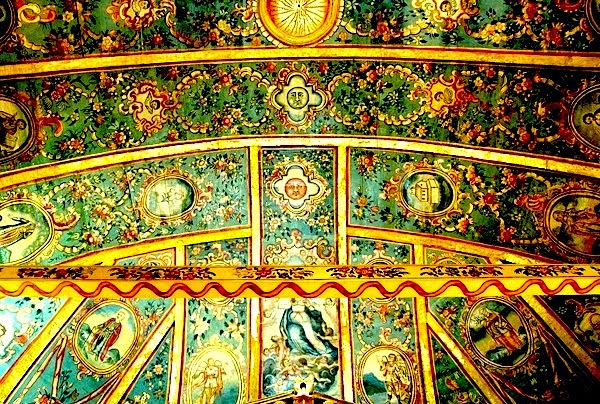 These extend across the tympanum above the main altar (east end) which depicts the Assumption of the Virgin with many of her associated symbols—Tower of David, Lily, Mirror, and the Morning Star—in adjacent panels. 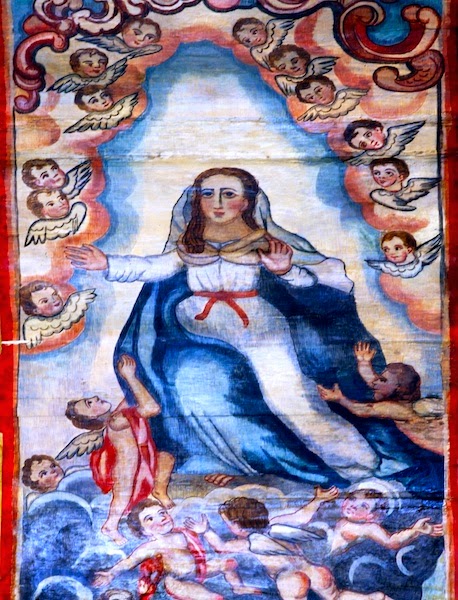 The Assumption is flanked by the archangels Gabriel and Raphael and, on the outer panels, the figures of Mary’s parents Sts Joachim and Anne.

The sun and moon are also given prominence, together with a circular, vented Gloria medallion—all colorfully detailed against a celestial aquamarine background. 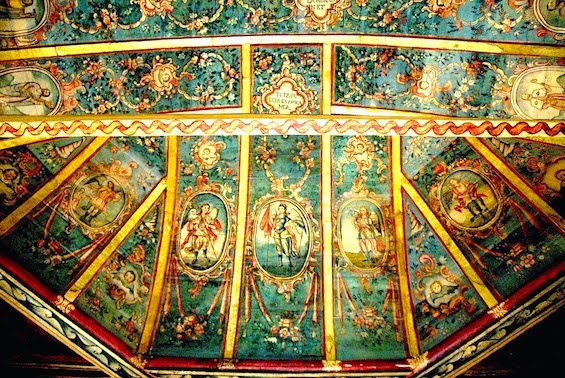 The opposing tympanum at the choir (west) end is also devoted to portraits of archangels, which include Michael, Gabriel, Raphael as well as a Guardian Angel, encased in florid frames surrounded by cherubim. 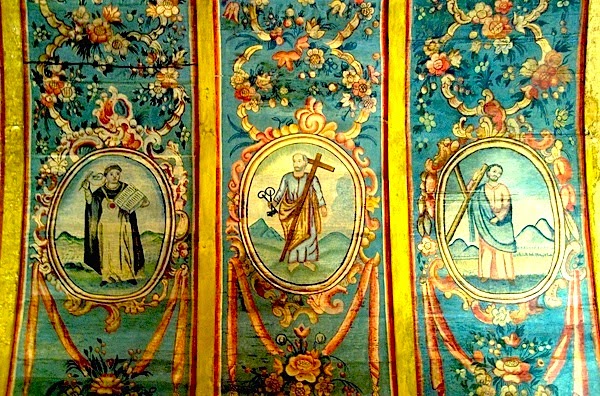 By contrast, the sloping side panels along both sides of the nave portray a hierarchy of Church and biblical saints in several sequences, painted in a more rustic style and also framed by cartouches festooned with floral decoration. 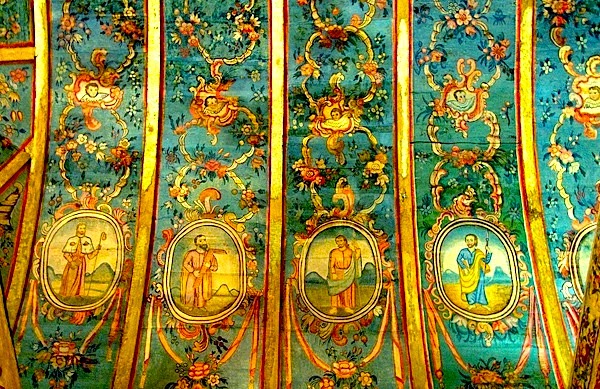 Towards the east end, two panels on either side depict the Four Evangelists—Matthew, Mark, Luke and John, while the six bays at the choir end are devoted to portraits of the Twelve Apostles, some now unfortunately damaged beyond recognition. The Patriarchs of the Latin Church—Saints Gregory, Ambrose, Jerome and Augustine—occupy the intervening panels.

The chapel also houses several late colonial furnishings of quality, including retablos, statuary and andas, or processional altars.  Outstanding among these are the gilded altarpieces, all recently restored, many with images of the Virgin.
The red and gold baroque main retablo, for instance, contains an imposing statue of La Purísima—the chapel patron—finished in fine estofado detail and wearing a silver crown. 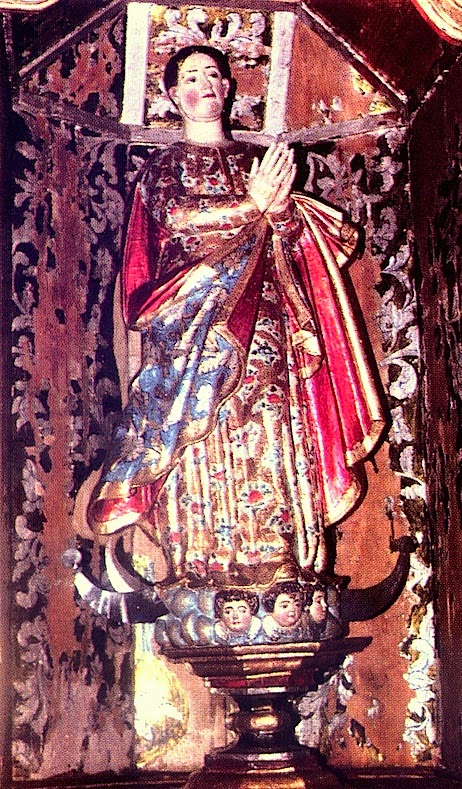 Again, she is accompanied by the figures of Sts Joachim and Anne and flanked by popular portraits of Santiago Matamoros and St. Catherine of Alexandria on the lateral wings of the altarpiece. 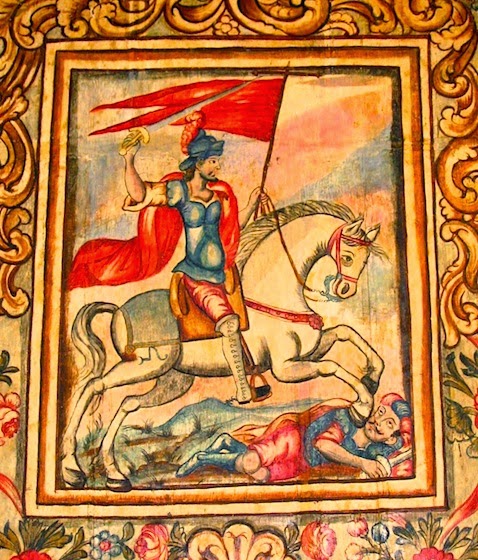 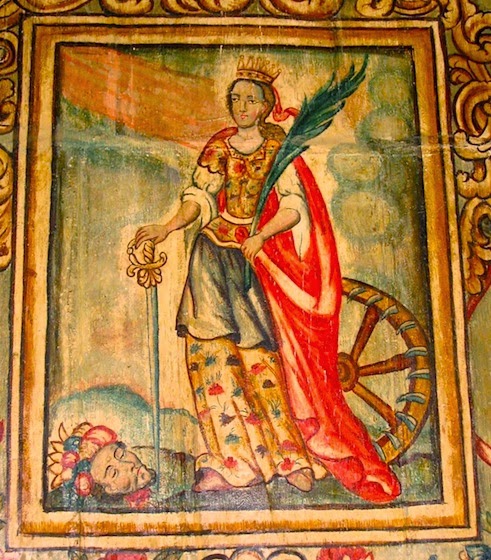 One unusual item in the nave is the tiny choir loft or gallery by the entry in the northwest corner—a curious counterpart to the baptistery structure under the choir in the main church.
Supported by a decorative carved column and girded by a wooden balustrade, it is attractively painted in folkloric style with yellow and green floral ornament. 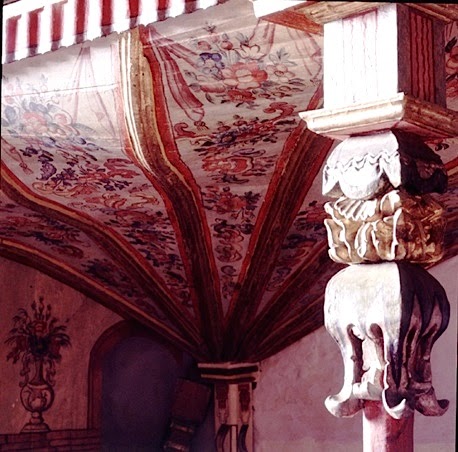