Missions of Michoacán. Nurio: The Church 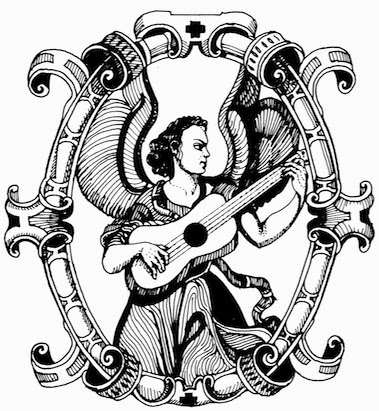 Nurio Tepaqua
Nurio, located in the hills west of Pomacuarán and Capácuaro, is among the better known mission complexes of this highland region of western Michoacán.
At Nurio both the church of Santiago and its adjacent guatápera chapel of La Inmaculada boast splendid painted ceilings. Although different in date and style, together they represent a combination unique in Mexico.
In this first of two posts we look at the main church. 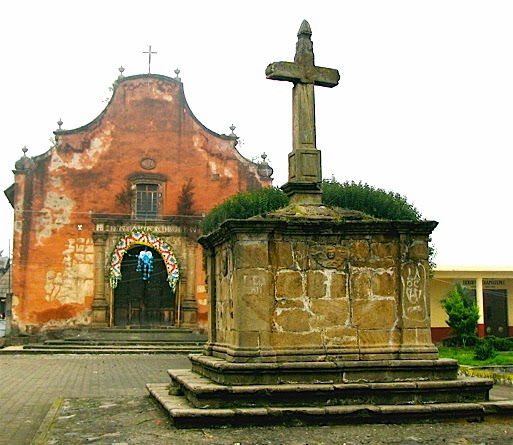 The Church
The grand façade of the Augustinian church of Santiago Apostol, currently a streaky orange, features a classical, cut stone porch with Corinthian columns. An imposing scalloped gable caps the facade and a battered stone atrium cross stands on its imposing base out front.
In Augustinian style, a Latin frieze above the doorway proclaims the church to be the House of God and the Gate of Heaven, and bears the date 1639.  A relief of the patron saint, St. James the Apostle, is emblazoned on the keystone of the doorway.
Inside, the nave is now roofed by a plain, beamed ceiling. This was repaired following a disastrous fire in the 1980s, and any former painted panels there have been lost.
However, the highly decorative arched under choir has survived.
The Under Choir
This exquisitely painted and recently restored ceiling is the now principal artistic feature of the church. Completed some time between the mid 1800s and the end of the century, it is L-shaped in plan and is formed like a three sided trough or basin.

Banded wooden columns with carved and painted capitals support the extension into the nave.
Its dazzling polychrome murals are among the most ornamental in the region, possibly providing a model for other churches in the area including nearby Cocucho.

The figural portraits exhibit a high order of draftsmanship, with nuanced coloration in the style of the metropolis, rather than from the hand of a country painter. 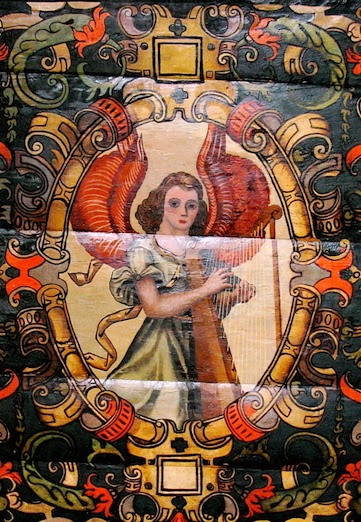 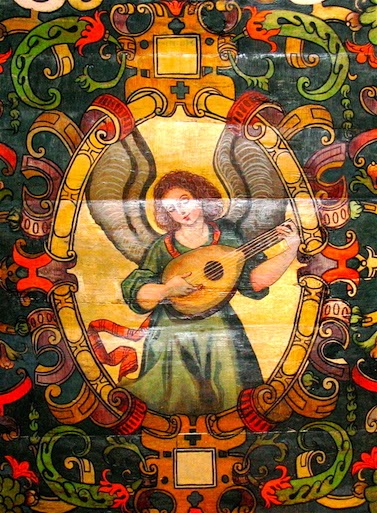 © Carolyn Brown
Thematically, however, the ceiling follows the regional pattern, focusing mainly on musical angels and archangels—especially appropriate for its location beneath the choir.
Framed by oval cartouches laced with intricate strapwork, acanthus leaves and flowers, sweet faced angels play period instruments including a harp, mandolin, viol and guitar, along with a bassoon and organ. These are interspersed with singing angels holding up choral music books of the period. 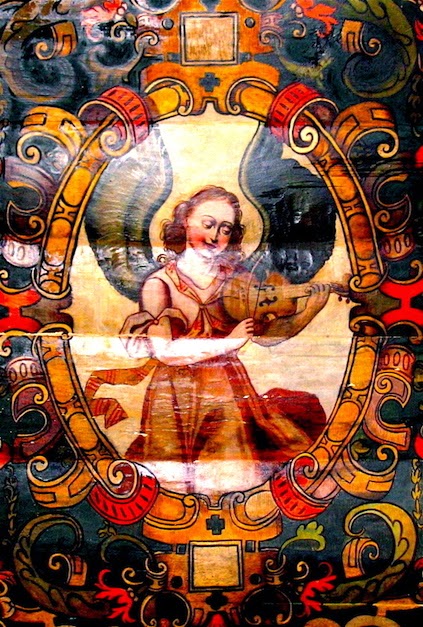 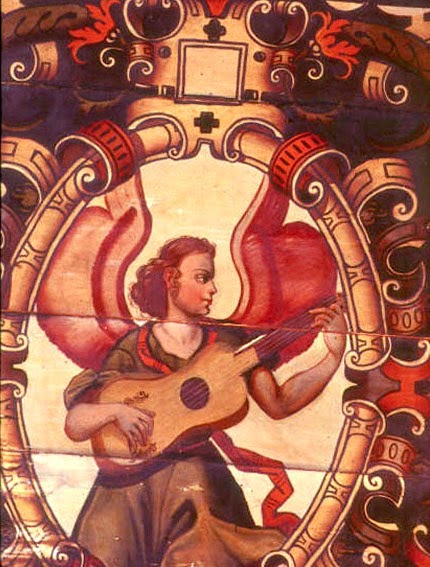 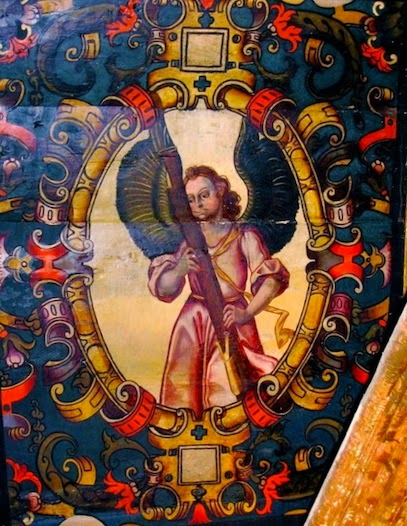 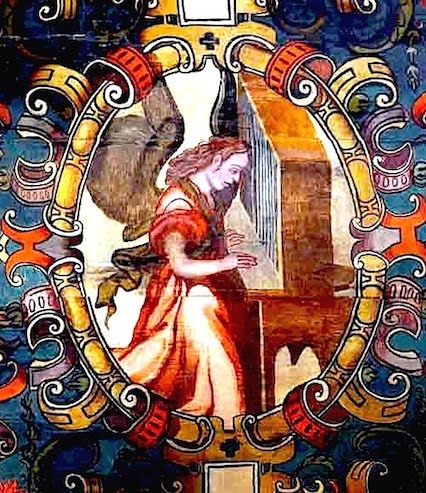 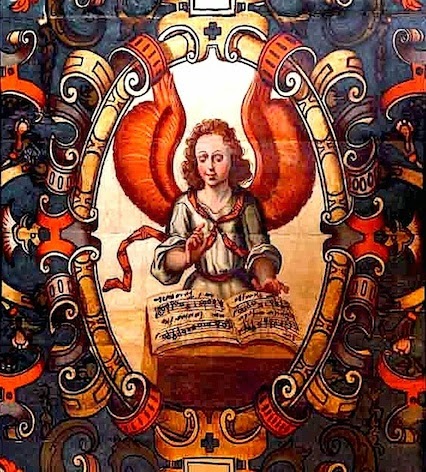 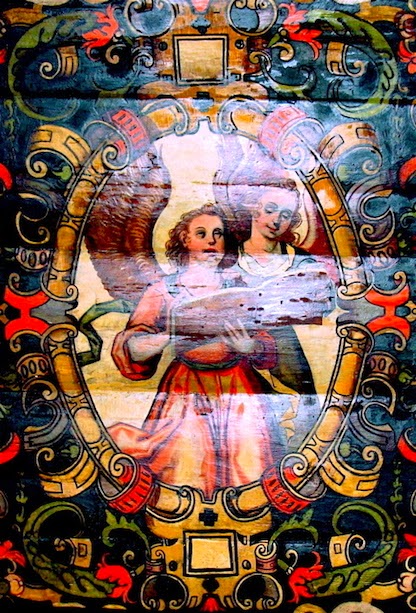 Archangels accompany the musicians, notably the stern, helmeted figure of the St Michael, together with the Archangel Gabriel and a Guardian angel. The figures of a bishop, thought to be Saint Augustine, and St Mary Magdalene represent celebrated sinners redeemed by faith.
Another exceptional aspect of the ceiling is the grandly ornate star or Gloria, set in a diamond frame at its center and bespangled with scrolls, strapwork and winged cherubs.
Complementing the ceiling, other furnishings of interest in the church include a pair of baroque side retablos, framing fine paintings of the Virgin that may be by the same artist as the ceiling panels. 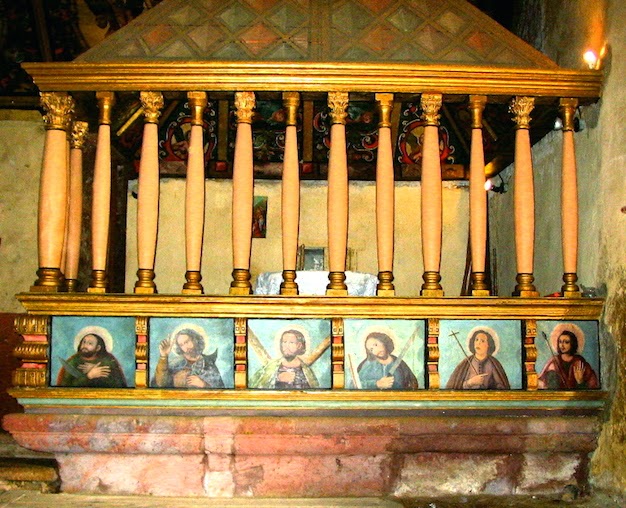 The Baptistery
But perhaps the most unusual additional feature at Nurio is the self contained wooden baptistery beneath the choir.
Enclosed by a carved balustrade and lined with portraits of the Apostles along its base, the structure carries its own little roof, recently discovered to also bear polychrome painting. 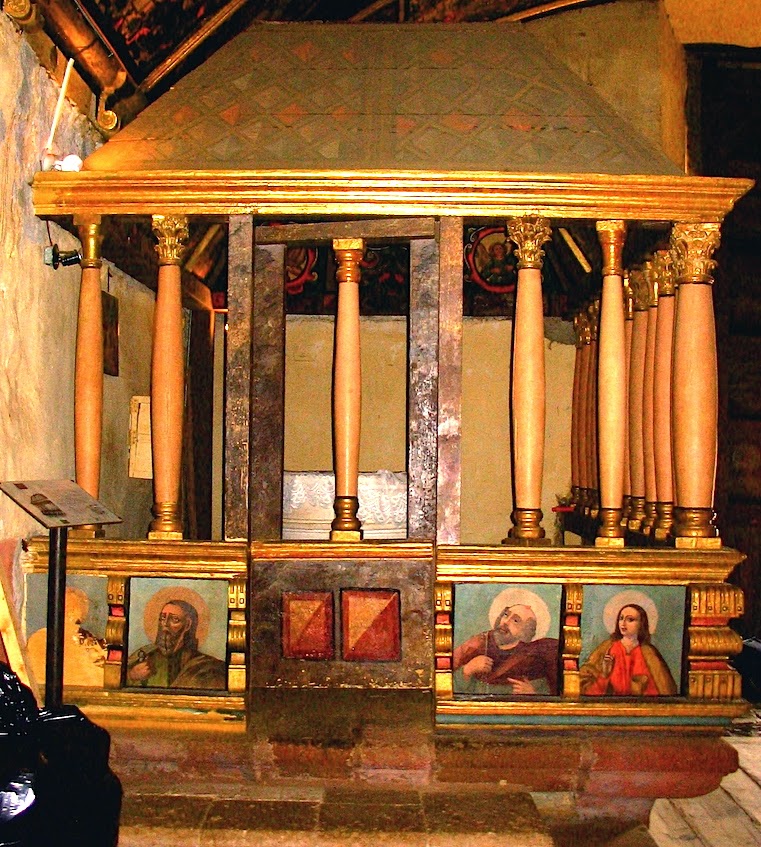 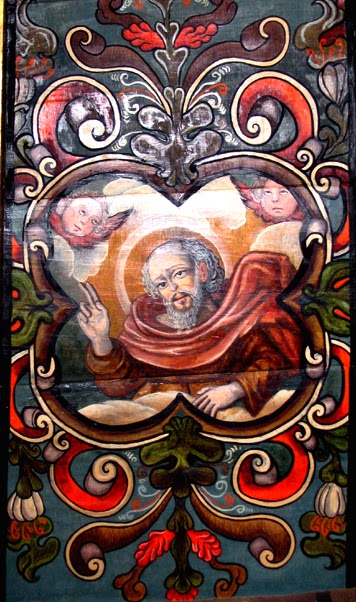 Nurio baptistry: entry and Padre Eterno
Highly decorative and painted in a similar style to the under choir, these panels portray God the Father amid a cloud of angels—an intriguing hint of how the original nave ceiling might have appeared before the fire.

We accept no advertising. If you enjoy our posts you may support our efforts
by acquiring our guidebooks on colonial Mexico
Posted by Richard Perry at 8:44 AM