Founded in 1548 by Fray Juan de Alameda, the monastery of San Andrés Calpan sits in a sleepy hill town set among cornfields and walnut groves on the slopes of the volcano Ixtaccihuatl.
A gem of early Franciscan architecture, the monastery is even now seldom visited by travelers. Fray Juan also drew up the plans and may have supervised the early construction from nearby Huejotzingo. The atrium is cut deep into the hillside at the west end, where a flight of stone steps descends steeply from the raised gateway.
To the east, the apse of the church and the rear of the convento stand tall above the sloping hillside, commanding a panoramic view of the entire valley below. 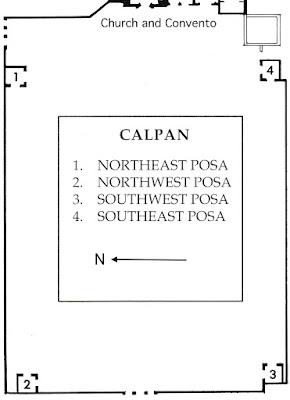 The Posa Chapels
Calpan's atrium is a 16th century sculpture garden, its posa chapels justly famed as the most elaborate and best preserved in Mexico—probably dating from the 1550s.
Together with those at Huejotzingo, the four posas at Calpan are unique for their imaginative stone carving and complex iconography. Their sculpted reliefs are a triumph of tequitqui ornament, exquisitely carved by a team of skilled native artisans in the service of their Franciscan patrons. Each of the four chapels is linked to one of the four principal barrios of Calpan—Tepetipa, Tlamapa, Tlalnahuac and Tlaxixco.

As at Huejotzingo, the imagery illustrates the redemptive power of Christ's Passion, as mediated by the Franciscan Order. But here, the theme takes on a more urgent tone, intensified by apocalyptic visions of the Second Coming and divine judgment.
In this post, the first of four, we describe the posas in their traditional order, proceeding counterclockwise from the  processional northeastern gateway. 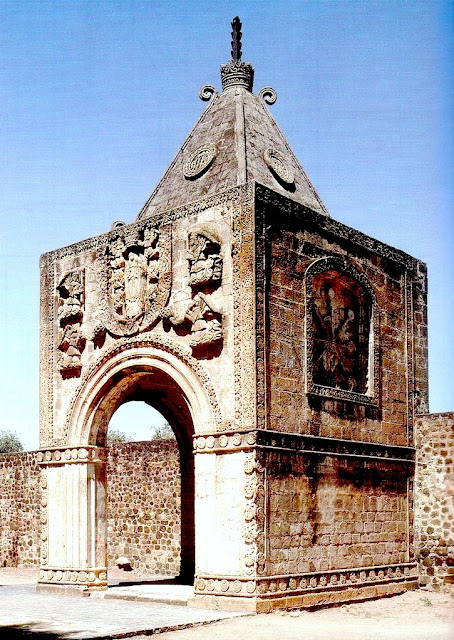 1. The Northeast Posa
Dedicated to the Virgin Mary, this first and most extensively sculpted chapel stands just inside the arcaded gateway on the north side of the atrium. Carved panels of rosettes and intricate foliage border the reliefs on three sides of the posa. 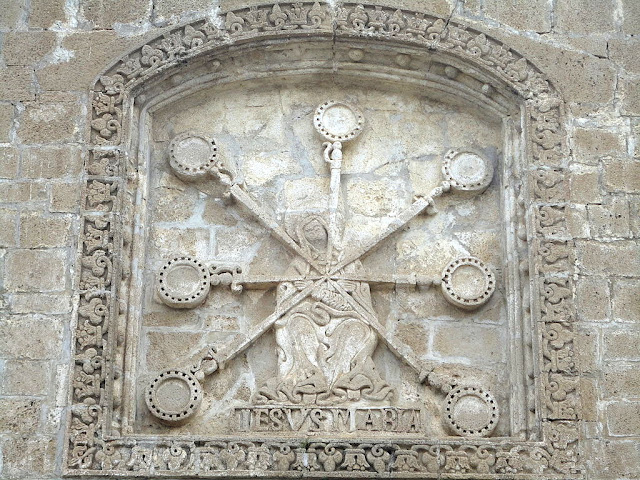 A dramatic relief of the Virgin of Sorrows covers the otherwise blank eastern facade, the first to be encountered in procession around the atrium. Seven giant swords with engraved hilts and dagger-like points, symbolizing her Sorrows, crisscross Mary's grieving figure. 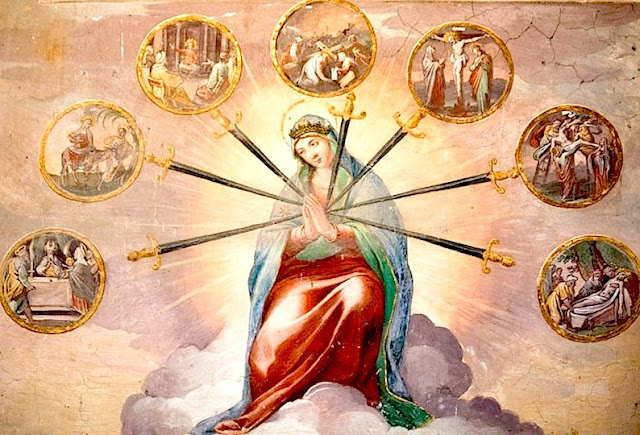 The presence of prominent disks before each hilt suggests that they may once have enclosed miniature inlays or reliefs of the Seven Joys, or corresponding episodes in the life of the Virgin. 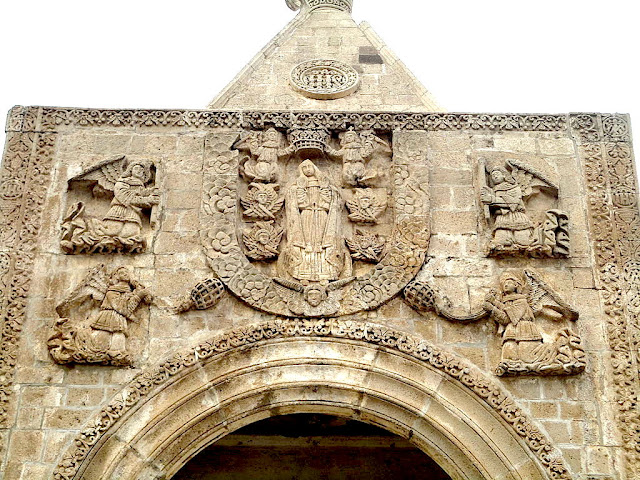 The Assumption or Coronation of the Virgin, carved over the south facing archway, is encased in a U-shaped frame. Here she is swathed in a voluminous robe amid a celestial cloud of seraphs who display the crown above her head. To either side angels hover holding candles and swinging censers. 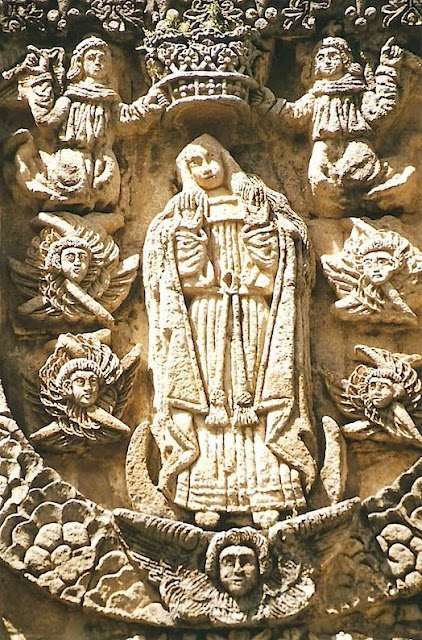 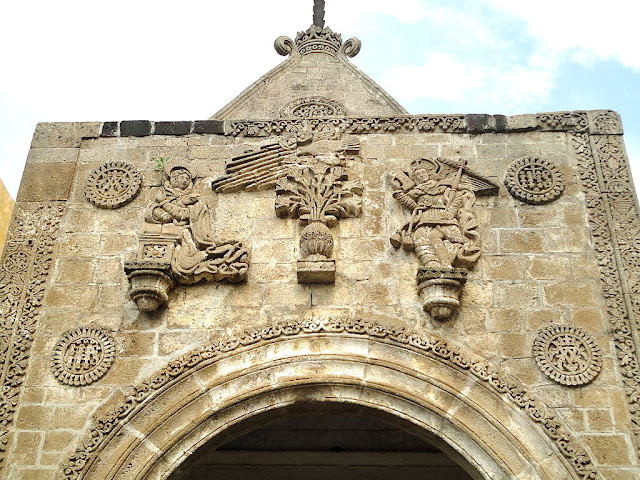 Portrayal of the Annunciation embellishes the third face of the posa. The Virgin Mary sits on the left, with the Archangel Gabriel on her right. An outsized vase of lilies symbolizes the purity of the Mother of God, and the Holy Spirit in the form of a dove descending through exaggerated rays of heavenly light. 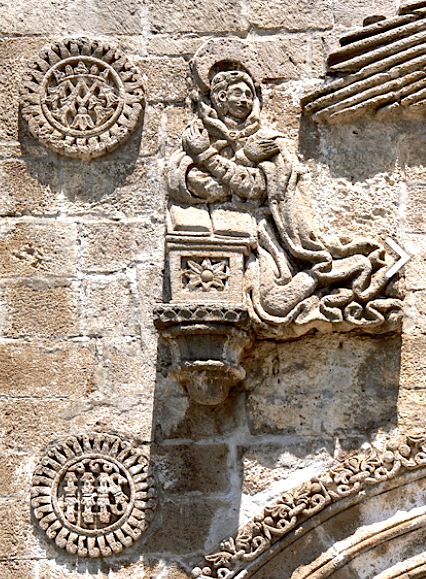 Monograms of Christ and the Virgin are linked on the jambs, friezes and roof medallions. 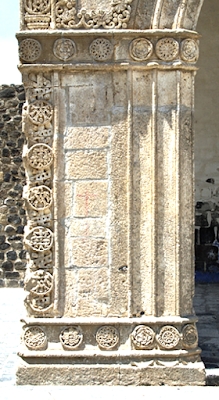 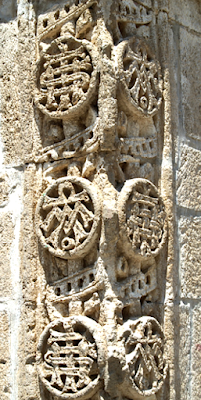 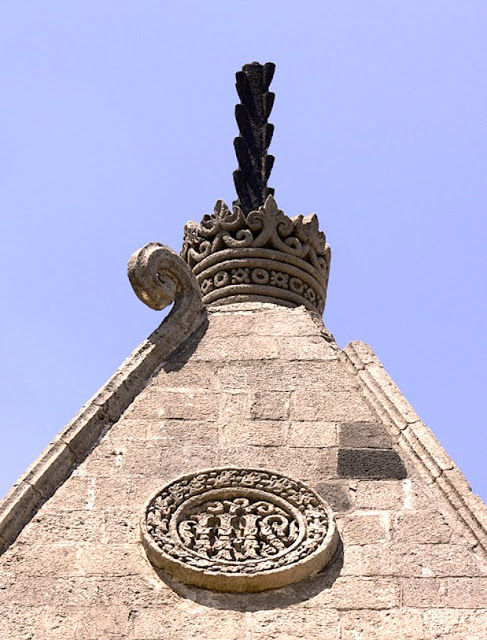 The steep pyramidal roof of the chapel, its corners lined by moldings with prominent volutes on either end, is topped by a  fleurs-de-lis crown and the shaft of a tree cross shaped like a quiote or agave floral spike.
text © 2018 Richard D. Perry
photography by Carolyn Brown, Patrice Schmitz, Felipe Falcón and the author
Posted by Richard Perry at 11:37 AM