As a follow up to our recent series on the sculpted posa chapels at Calpan, we now look at the closely related chapels of nearby San Miguel Huejotzingo. 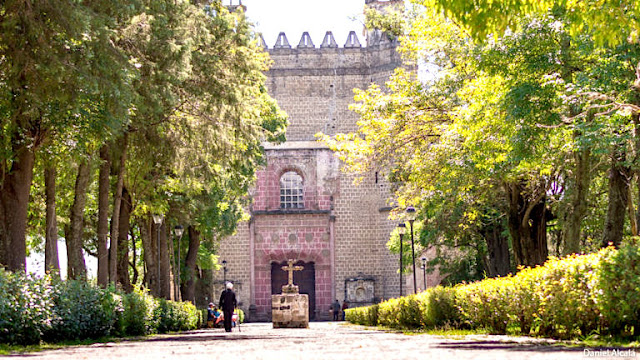 However grand the Huejotzingo church may seem to-day, in the 16th century it was far too small to hold the vast congregation of newly converted Indians. By necessity, the friars preached out-doors, celebrating mass in the spacious, wooded atrium.
On feast days, friars and acolytes moved in procession around the perimeter, stopping briefly to pray at the four corner chapels, known as posas—from the Spanish posar, meaning "to pause." 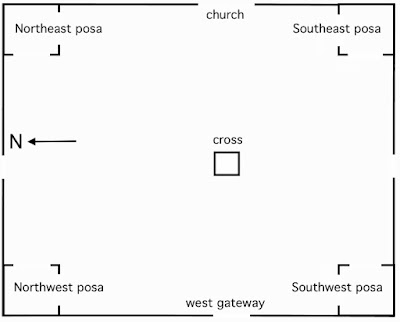 Built and maintained throughout the colonial era by cofradías, the religious brotherhoods of the community, to honor their local saints, together with those at Calpan this quartet of chapels is one of the very few complete sets of 16th century posas to survive intact in Mexico. Each of the four is dedicated to the patron saint of the associated cofradía, and played an essential part in the Easter festivities at Huejotzingo.
In addition to their remarkable decorative qualities, the complex sculptural program of the posas is also designed to link the Passion story with the Franciscan Order. 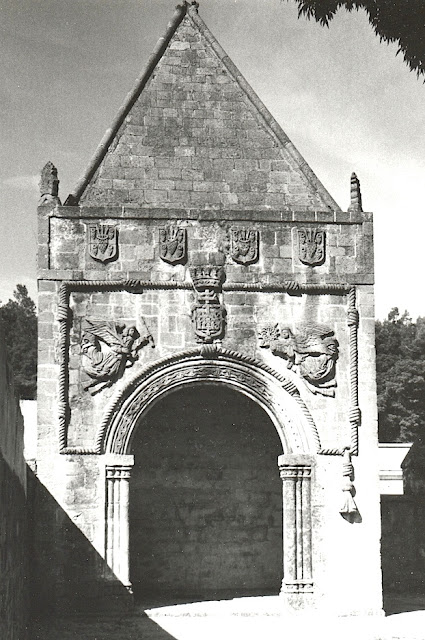 Capped by a distinctive pyramidal roof, each posa is elaborately carved on its two open sides—eight facades in all. The archway of each posa is formed by clustered Gothic colonettes and linked fetter moldings, and framed above by a rectangular alfiz in the form of the Franciscan knotted cord ending in a prominent tassel or knout. 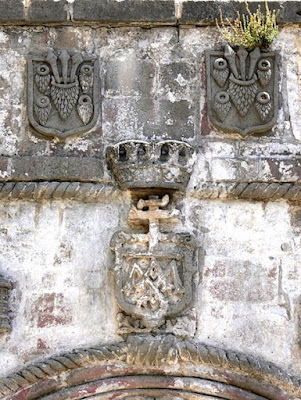 At the center of each alfiz, an ornate, crowned monogram of either the Holy Name of Christ or the Virgin Mary is surmounted by a row of relief medallions displaying the Five Wounds of Christ.
This central symbol of the Passion—intimately associated with the receiving of the Stigmata by St. Francis and thus doubly meaningful to the Franciscans—was universally emblazoned on all their buildings in the New World.
Although all the facades have a common format, the iconography differs from posa to posa. Pairs of angel reliefs, frozen in flight, present the various Instruments of the Passion, in a sequence that runs counter-clockwise around the atrium, starting with the north east corner. 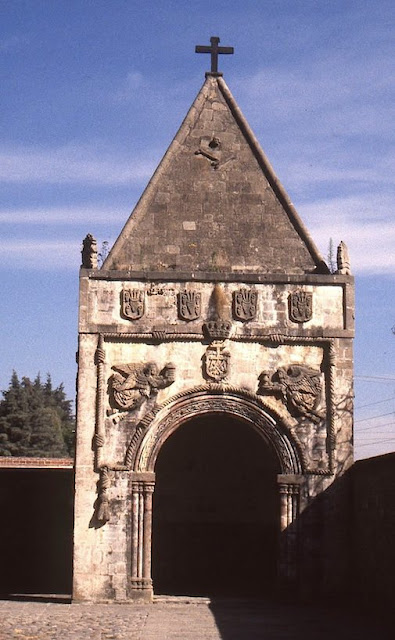 Northeast Posa.   “John the Baptist”
On the south face of the first chapel, to the immediate left of the church door, angels depict the amphora and ewer of water used by Pontius Pilate, and the lantern by whose light Christ was discovered and arrested. 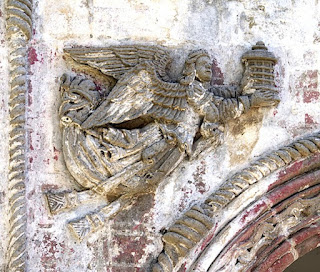 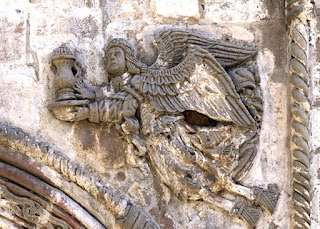 Above the adjacent archway, facing west, angels display the lance and hyssop (sponge of vinegar) with a cup of honey. 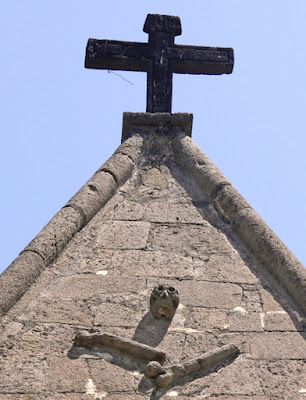 The date 1550 is carved on the roof beside a skull and crossbones. 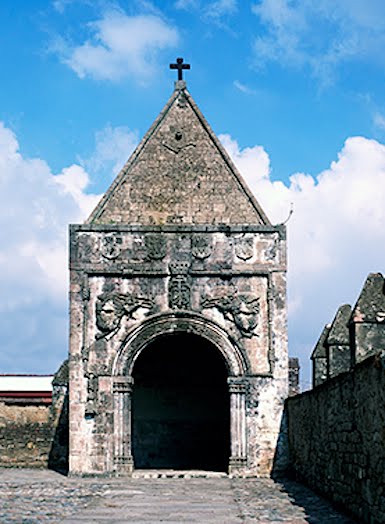 Northwest Posa.  “St Peter & St Paul”
The best known and preserved of the four chapels. On the east side, angels with trumpets sound the Last Judgment. Musical flowers issue from the bells of the trombone like instruments On the south face, another angel brandishes the sword of Saint Peter, while the thirty pieces of silver are shown opposite. 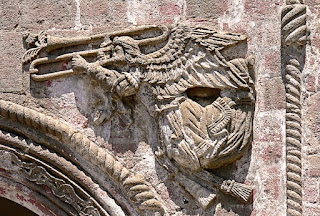 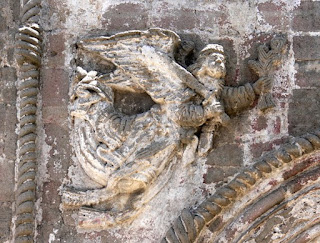 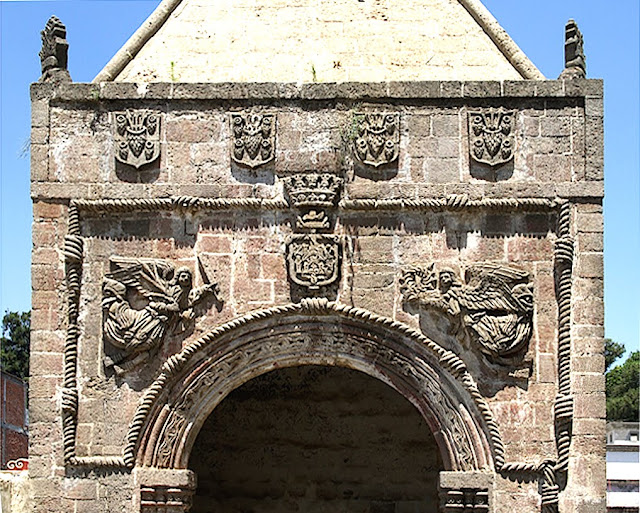 Southwest Posa.    “The Assumption”
Here, the angels carry the cruel tools of the Crucifixion. On the north side they bear the scourge and a vicious club, and opposite, the flagellation column with the cockerel crowing on top. On the east face, one angel brandishes a cane and a plant, and the other a spiky crown of thorns. 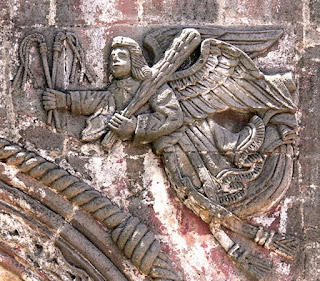 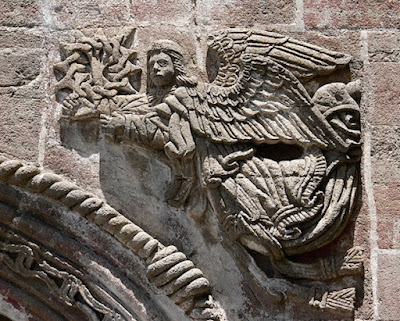 Southeast Posa.    “Santiago”
Unfortunately, the reliefs on the last posa have been much defaced and are indecipherable. The chapel interiors are all empty now. The altars and shrines that once adorned them have been removed and only a few patches of colored fresco remain. 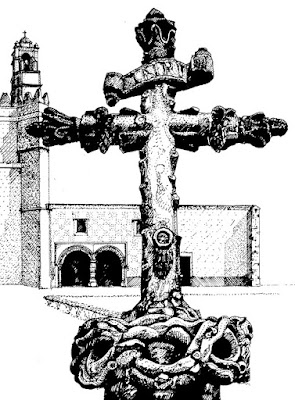 Tree crosses, also carved with the Instruments of the Passion, once stood atop each chapel roof. Only one such cross has been preserved and now stands in a simulated crown of thorns on a pedestal in front of the church.

text and graphics © 2018 Richard D. Perry
photography by the author and courtesy of Patrice Schmitz and Carolyn Brown.
see our earlier post on the north doorway at Huejotzingo
Posted by Richard Perry at 1:19 PM