In a recent post on our sister site we described the murals inside the church at San Miguel Huejotzingo, in which the north entry played a central, ceremonial role. Here we look at this complex, sculpted doorway in greater detail.

More sensuously carved than the west doorway of the church, the ornate Plateresque north entry may have been influenced by the Manueline style—an ornate amalgam of late Gothic, Moorish and oriental architecture that flourished in 15th century Portugal. 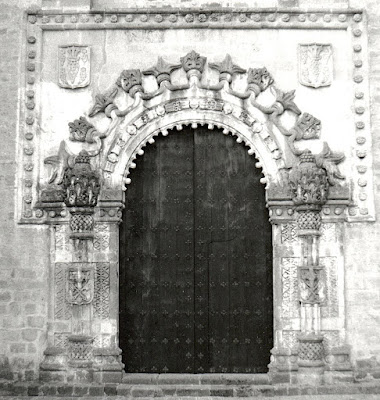 Like all the sculpture at Huejotzingo, the exotic detailing of the north porch reflects religious symbolism, in this case related to its historical function.
From medieval times, the north doorway of the church had held special significance for the Franciscans. The portiuncula, as it was known, commemorated the rebuilding of the tiny ruined chapel of Santa Maria degli Angeli, just outside Assisi, by the young, newly converted St. Francis. As the processional entry to a Franciscan church, it was usually opened only on certain feast days, such as Easter Friday.
Also known as the Door of Jubilee, in a wider sense it symbolized for the friars the portal of Paradise, the entry of the faithful to the New Jerusalem.  In fact some believe that details of the Huejotzingo design were based on an Old Testament description of Solomon's Temple, one of the biblical models for the Celestial City that would be established after the Second Coming of Christ—an event imminently anticipated by the more eschatological missionaries. 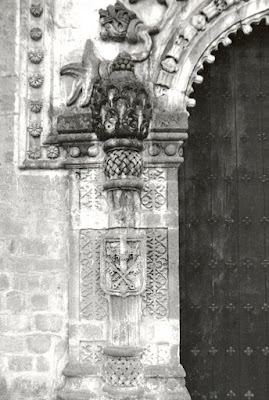 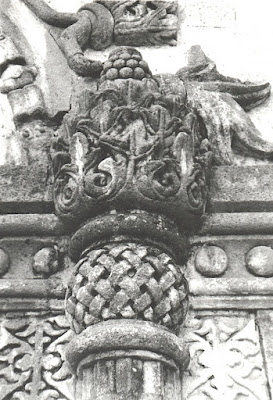 The Jambs
The broad, foliated doorjambs are bracketed by pearl moldings above and below and divided by unusual half columns with bulbous "basket" capitals and bases. Heraldic shields displaying the crossed Keys of Heaven are affixed to the center of either column, superimposed upon crucifixes hung with reliefs of the Instruments of the Passion.
The columns are headed by enormous finials of sprouting acanthus leaves topped by bunches of grapes, that burst through the doorframe into the archway overhead. 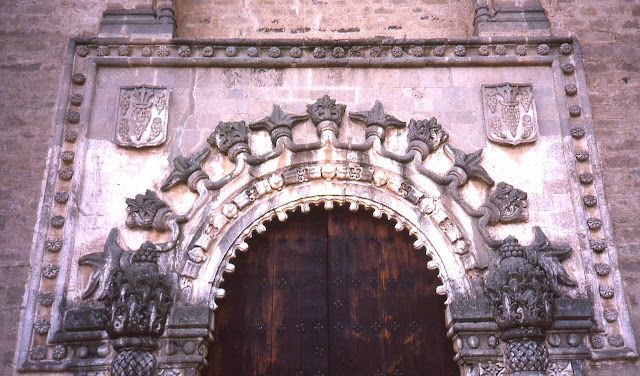 The Archway
A distinctive chain molding around the center archway is thought to signify the Order of the Golden Fleece, an aristocratic religious/military order headed by the Spanish Emperor Charles V.
Similar chain moldings appear in the porteria and posas of the monastery, although the pervasive presence of this motif here at Huejotzingo is unexplained. 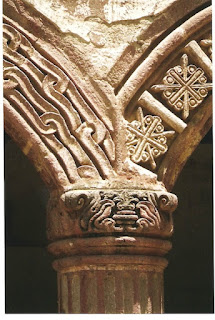 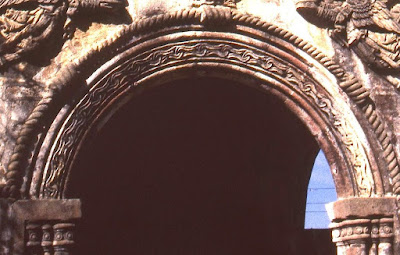 chain moldings on the porteria and posa 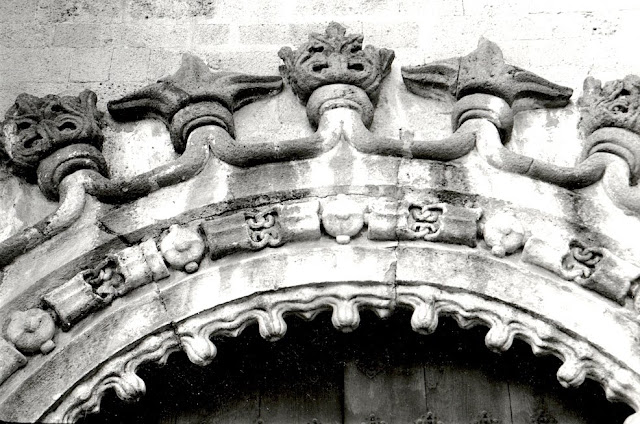 The outer floral ring above the archway is especially bold. Alternating, broad leaf clusters and swelling buds sprout from the molding, vigorously modeled in the round.
A generous alfiz studded with rosettes frames the entire doorway, also enclosing escutcheons of the Five Wounds on either side.